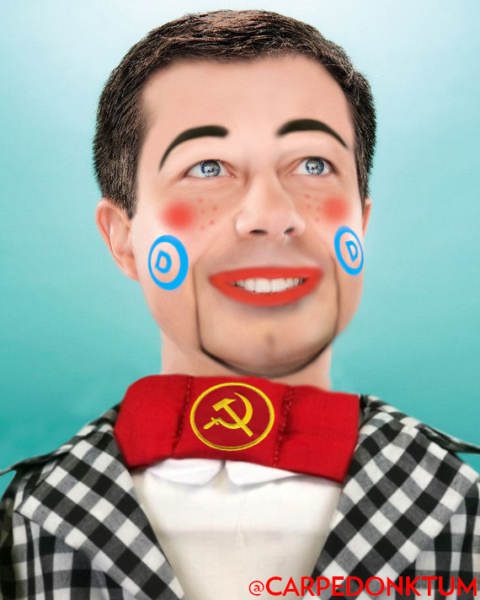 Transportation Secretary Pete Buttigieg, who it turns out has been away on family leave these past months as America's supply chain has collapsed, has finally come out of the woodwork.

Did he come out to announce how he's making the situation better?

Nope, what brought him out was some harsh, criticism by Fox News host Tucker Carlson, who asked if Missing Pete on family leave was trying to learn how to breast-feed. Yes, it was tasteless, but that's hardly a burning issue to anyone else but Pete, given his larger and more important point.

“Well, look, in his case, I guess he just doesn’t understand the concept of bottle feeding, let alone the concept of paternity leave,” said [Buttigieg] the secretary. “But what is really strange is that, you know, this is from a side of the aisle that used to claim the mantle of being pro-family.”
[MSNBC host and former flak Nicolle] Wallace, responded, “It feels homophobic to suggest that you were trying to figure out breast-feeding. I mean, it feels dirtier than that. How does this attack land for you and [your husband] Chasten?”
“Well, look, this attack is coming from a guy who has yet to explain his apparent approval for the assassination of Harvey Milk,” said Buttigieg, referring to the controversy over Carlson’s yearbook saying he was in the “Dan White Society.” (Dan White was the man who assassinated Milk.)
“So, obviously, we know that there’s some dark places where some of these attitudes come from,” Buttigieg continued. “But I also note that that doesn’t speak for the country. I don’t think that even speaks for most people on the other side of the aisle from the party that I belong to.”

Who the heck cares? The supply chain is collapsing, shortages are getting Venezuelan-looking, inflation is heating up, all as a result the supply chain breakdown But Pete's more interested in salving his wounded pride, playing identity politics cards as the "first" gay transportation secretary, and busy trying to gauge Carlson's motives in a disguised counterattack on Carlson. Who cares?