Will Obama’s name live in infamy? 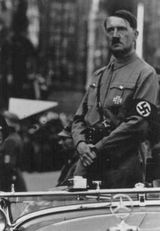 Are God, Family & Country Loving Americans Going To Allow This To Happen On Their Watch?-You Decide:

History is repeating itself. The recent interim nuclear deal signed by the United States and other major powers with Iran in Geneva paves the way for war. President Obama is the new Neville Chamberlain, the British prime minister who boasted of creating “peace in our time” after signing an agreement with Nazi Germany. In fact, the deal at Munich guaranteed only one thing: another bloody conflict. Mr. Obama has given the world a second Munich. He will rue the day.

On Sept. 30, 1938, Britain and France capitulated to Nazi dictator Adolf Hitler. Czechoslovakia was betrayed in order to appease Hitler’s expansionist ambitions. Sacrificing Czechoslovakia’s territorial integrity, however, only whetted Hitler’s appetite for further aggression. In fact, Chamberlain’s cowardly act only increased the Nazi strongman’s contempt for both England and the West. Munich gave Hitler the time and military capability to eventually conquer most of Europe. It was a prelude to much greater disasters — the invasion of Poland, the Nazi-Soviet pact, the fall of France, the Holocaust and more than 50 million deaths caused by World War II. The lesson of Munich was clear: Genocidal dictatorships bent on domination cannot be appeased. They must be contained and eventually defeated.

The Obama administration has forgotten this. Desperate for some kind of a deal, Secretary of State John Kerry has made a historic, almost unforgivable blunder. The agreement gives Iran’s Islamist mullahs a very precious gift: the time they need to achieve a nuclear bomb.

Mr. Obama’s first — and gravest — mistake is to assume the regime in Tehran is rational and genuinely seeks peace with its neighbors. It doesn’t. From its inception in 1979, the Islamic republic has been driven by a messianic radical Shiite ideology. Its mission is to dominate the Middle East in order to create a global caliphate — one they believe will usher in the coming of the 12th Imam, the Shiite Muslim savior prophesied in the apocalypse. In short, religious fanatics control Iran’s theocracy. They champion salvation through Armageddon.

For decades, Tehran has been waging a covert war against America and Israel. It is the greatest sponsor of state terrorism in the world. It has armed, trained and funded Shiite militias in Iraq responsible for killing numerous U.S. troops. It backs jihadists in Afghanistan, who are killing and maiming our troops. The Iranian regime has American blood on its hands. Iraq has fallen under its sphere of influence. It supports Hezbollah and Hamas. It has turned southern Lebanon into a political vassal. It props up Syrian strongman Bashar Assad, enabling him to continue his brutal civil war. It imprisons and tortures dissidents. Homosexuals are stoned and killed. Women are relegated to second-class status. Christians are routinely persecuted; some of them are lashed simply for taking Communion wine. It is a murderous, Islamic police state.

Yet the linchpin of Iran’s theocracy — like Nazi Germany — is anti-Semitism. The reason is simple: For the revolutionary Shiite prophecy to be fulfilled, the Jews, and especially, the Jewish state, must be annihilated. Tehran’s leaders have repeatedly and publicly called for Israel’s destruction. They believe the blood of dead Jews will consecrate the coming world Muslim empire. For example, just prior to the deal in Geneva, supreme leader Ayatollah Ali Khamenei said Jews are “the rabid dogs of the Middle East” and that the “Zionist regime is doomed to destruction.” This is why Israel, as well as Sunni Muslim powers, such as Saudi Arabia, Turkey and Egypt, are convinced that a nuclear-armed Iran poses an existential threat. Deranged mullahs with nuclear weapons could plunge the entire region into a cataclysm.

Since becoming president, Mr. Obama has promised Israel and our Arab allies that he would never allow Tehran to acquire the bomb. He has prevented Jerusalem and Riyadh from taking unilateral military action. The Israelis and Saudis — similar to the Czechs in 1938 — have been betrayed. The deal does nothing to stop Iran from enriching uranium. Its centrifuge stockpiles will not be eliminated. Its Arak plutonium reactor will not be dismantled. In other words, the mullahs’ nuclear-weapons program will not be hindered in any meaningful way. In exchange, sanctions will be eased, and the regime will gain access to nearly $8 billion in frozen assets.

Like Munich, the Geneva deal is a fool’s bargain. In return for cosmetic concessions, Iran now has a clear path to go nuclear. The end result almost ensures a war. Either Israel (and maybe Saudi Arabia) must launch a military strike against Tehran’s nuclear sites before it is too late, or Iran attains the bomb and makes good on its repeated promise, thereby sparking a nuclear holocaust. Mr. Obama has committed a historic diplomatic bungle. His name should go down in infamy.

Note: The following articles and/or blogs and eye-opening videos relate to this disturbing and gut-wrenching issue-You Decide:

The Sides Are Forming For The Coming Civil War!-Posted on Militia News-By Dave Hodges.-On November 28, 2013:

What we haven’t been told about the President’s background!

The Audacity of Socialism!

Are We Witnessing Narcissism At Work?

Narcissism and Tyranny—The Consequence of Executive Egocentrism: ‘Self Service Masquerading as Public Service!’

Communists and Muslims: The Hidden Hand of the KGB!

Progressives and Communists Are Out of the Closet Together!

The Midterm Elections and the Communist Manifesto!

Progressive group maps out President Obama’s strategy for next 2 years!

THE SPEECH YOU WERE NEVER SUPPOSED TO SEE: ‘Suppressed, deleted, removed from Net – now unedited version back’!

Were We Forewarned About What to Expect If President Obama Got Elected?