by rickwells.us
{ rickwells.us } ~ Those engineering the railroading of General Michael Flynn had only one thing to fear... having sewn up their guilty plea and being on the verge of sentencing the patriot former National Security Advisor to President Trump. That one thing was an honest judge, which they now face in the person of US District Judge Emmet Sullivan. Judge Andrew Napolitano says he’s never heard of something like what is taking place on the Flynn case having happened before. He says, “So Mike Flynn pleads guilty to lying to the FBI in December. The judge before whom he pleads guilty takes himself off the case. Why?” “Because that judge is also on the FISA court and he may,” says Napolitano, “he may very well have authorized the wire tap that surveilled Mike Flynn when he was talking to then-Ambassador Kislyak, which is the alleged lie that he told the FBI about.”...  https://rickwells.us/judge-sullivan-flynn-railroaded/

by PETER HASSON
{ dailycaller.com } ~ Lacking any evidence of collusion between President Trump and the Russian operatives who meddled in the 2016 campaign... Democrats are now attempting to re-define “collusion” in order to declare Trump guilty of it. When Democrats first raised the collusion accusations after the election, they suggested that the Trump campaign had been in direct cahoots with the Russian hackers who stole emails from liar-Clinton campaign chair John Podesta and the Democratic National Committee, before later distributing them to WikiLeaks. “It’s very much unknown whether there was collusion,” Podesta said in December 2016, referring to Russia’s hacking of the emails...  http://dailycaller.com/2018/02/20/collusion-democrats-move-goalpost...
.
Same Crisis Actor Hogg In FL and CA,
Coached By Media In Florida Aftermath

by rickwells.us
{ rickwells.us } ~ It’s commonplace for Democrats to be accused of standing on the backs of dead shooting victims to employ crisis actors... particularly when they can use children to condemn Republicans in the name of their murdered classmates. The situation with David Hogg is very strange. He was not only chosen, supposedly in the aftermath of the shooting, by the left to be their spokesboy for gun vilification and seizure, but he’s also been on TV recently on the opposite coast, 3,000 miles away in Redondo Beach, California. Either that’s the strangest of coincidences or there’s more to this story. As the video shows, he and one of his fellow punks videotaped themselves giving a hard to time to an authority figure, this time a California lifeguard, who the friend of Hogg was disrespectful to and used profanity against. It’s a relatively current video, since the age of Hogg appears to be the same...  https://rickwells.us/same-crisis-actor-hogg-fl-ca-2/

by Trey Sanchez
{ truthrevolt.org } ~ During its Olympics coverage, the media was so desperate to keep its Trump hate front and center... that it actually praised the dictatorship of North Korea for “stealing the show.” Kim Jong Un’s advisor sister, who was in attendance, “threw shade” at Vice President Mike Pence and the U.S. media gobbled it up, completely ignoring the fact that she helps her brother starve and torture his citizens. Meanwhile, North Korean athletes are scared to death to return home if they fail to bring home a medal because the dictatorship is known to punish athletes who don’t win. Even placing second or third could mean trouble. And it’s all bad news so far, as was reported in The Sun, because North Korea has yet to pull off a victory in South Korea...  https://www.truthrevolt.org/news/north-korean-athletes-who-dont-win...
.
Mr. Chips Needs to Pack Heat

by Truth Revolt
{ truthrevolt.org } ~ Understandably, much has been written about the awful school shooting in Parkland, Florida... where 17 young people were slaughtered at the hands of a sick and evil human being. The tragedy was particularly vexing as there were so many warning signs – indications that the killer, Nikolas Cruz, was planning his brutal act and was very capable of carrying it out. Social media: Last year, there was a YouTube post by “Nikolas Cruz,” who wrote: “Im [sic] going to be a professional school shooter.” Sheriff’s visits: Police responded to Cruz’s home 39 times over a seven-year period, according to documents released after the shooting. Full details are not yet available, but the nature of the emergencies at his home included “mentally ill person,” “child/elderly abuse,” “domestic disturbance” and “missing person.” FBI notification: The law-enforcement agency admittedly failed to investigate a warning that Cruz possessed a gun and planned to use it. Apparently a person who was close to the gunman called an FBI tip line on Jan. 5th, several weeks before the shooting, to report concerns about him...  https://www.truthrevolt.org/commentary/sand-mr-chips-needs-pack-heat
. 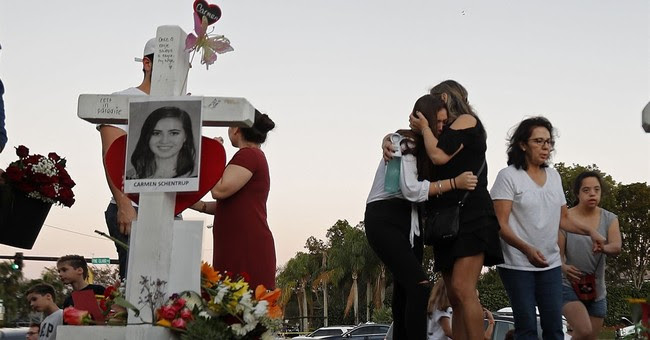 by Cal Thomas
{ townhall.com } ~ Reaction to the latest school shooting in Parkland, Florida, that left 17 people dead and many more wounded begins at the wrong end. It's not about passing more gun laws, which people intent on breaking existing laws will not obey; rather it is about heeding warning signs and doing something before it is too late.

In the case of 19-year-old Nikolas Cruz, who has been charged with premeditated murder, the signs were like a flashing red light. Former classmates offered a profile in danger to the media. They called Cruz, who had been expelled from the school for disciplinary reasons, a "loner" and "weird."

With all of these previews of coming destruction, why wasn't any action taken? Could Cruz have been helped? He was reportedly receiving "mental counseling," but clearly it was not enough to prevent this tragedy. Cruz is reportedly an orphan, but was there no one close to him who might have been helpful to him?

We are constantly told by law enforcement, "If you see something, say something." With Cruz there was plenty to see and also plenty to say. Did anyone speak up? The Florida campus reportedly had an armed officer onsite, though this officer never encountered Cruz during the shooting. Could there have been a quicker response? Could anyone have acted pre-emptively to force Cruz to get some help? Could he have been committed to a mental health facility for his own protection, and for the protection of others?

Metal detectors, armed guards and security passes for students, staff and teachers have all been proposed and in some cases tried as ways to discourage shooters from entering schools where unarmed students are trapped like fish in a barrel. School shooters and terrorists and this was an act of terror no matter the motive look for soft targets and there are few targets softer than a school full of kids.

Lawmakers in Florida and in Congress need to consider legislation that would give mental health professionals a way to intervene in cases of disturbed individuals who need psychological help, but aren't getting it. For those who seem most dangerous -- like Cruz -- perhaps laws could be enacted that would forcibly commit them to treatment, thereby cutting down on the number of mass shootings.

Social workers can intervene on behalf of young children they believe are being abused or neglected. In extreme cases, they can even remove the child from its home if the child is in need of protection. Could something like this be done with the mentally disturbed, without violating their constitutional rights? Don't we have the constitutional right to live free of the threat of mass shootings? Shouldn't the rights of the innocent be paramount?

To paraphrase a certain commercial about identity theft, no law can prevent all mass murder, or someone acquiring a gun, legally or illegally Cruz's AR-15 was apparently legally acquired, but the mayor of Broward County, Florida, Beam Furr, told the Miami Herald the shooting could have been prevented. "We missed the signs," said Furr, a former teacher, adding, "We should have seen some of the signs."

The signs were there for everyone to see. The problem with this shooting, as well as all the others, was the refusal to act. Action just might have prevented this tragedy.