TheFrontPageCover
~ Featuring ~
It's the Culture, Not the Guns
by Arnold Ahlert

by rickwells.us
{ rickwells.us } ~ Dan Bongino proves that, aside from the Russia, Russia, Russia hoax, bluster and BS can only take a Democrat so far... He proves that even if they’re black, gifted with a race card and an affirmative action college education and law license, ignorance of the facts doesn’t constitute a winning argument. Hannity asks his libtard guest, civil rights black supremacist attorney agitator Daryl Parks, if he’s concerned about the liar-Clintons and DNC spending $12 million dollars to purchase the hoax dossier in collaboration with Russia in order to deceive the American people. Ignorance is bliss for Daryl, he says that isn’t true. Hannity follows that up by asking if we should be concerned about the liar-Clintons profiting from the sale of Uranium to Russia and inflated speaking fees at the Rosatom, Russian nuclear company, affiliated bank...   https://rickwells.us/bongino-humiliates-clinton-dunce/

by David Voreacos and Stephanie Baker
An attorney who worked for a prominent law firm was charged with making false statements to federal authorities... as part of Special Counsel Robert Mueller’s probe of Russian collusion in the 2016 presidential election. Alex Van Der Zwaan was charged Feb. 16 with lying to the FBI and Mueller’s office about conversations related to his work on a report prepared by his law firm on the legitimacy of the criminal prosecution of a former Ukrainian prime minister, Yulia Tymoshenko. Prosecutors charged Van Der Zwaan by criminal information, which typically precedes a guilty plea. He is scheduled to appear Tuesday afternoon in federal court in Washington. He didn’t immediately respond to calls and emails seeking comment...   https://www.bloomberg.com/news/articles/2018-02-20/skadden-arps-law... 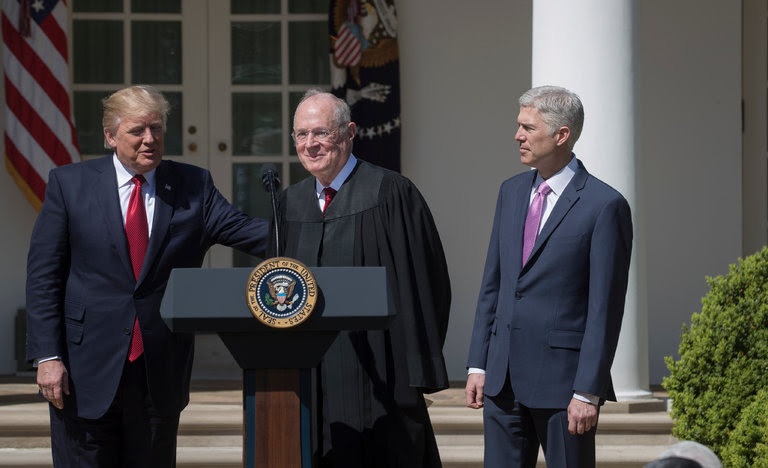 by ADAM LIPTAK
{ nytimes.com } ~ For the second year in a row, rumors that Justice Anthony M. Kennedy may retire from the Supreme Court are sweeping Washington... He is 81, and he is doubtless weighing many factors in deciding whether to stay. Among them, experts in judicial behavior said, are the tug of party loyalty, the preservation of his judicial legacy and how close his retirement would be to a presidential election. Justice Kennedy has long held the decisive vote in many of the Supreme Court’s most contested and consequential cases, and his retirement would give President Trump the opportunity to move the court sharply to the right. If Justice Kennedy steps down, the confirmation fight over his successor will be titanic...   https://www.nytimes.com/2018/02/19/us/politics/anthony-kennedy-reti...
.
Tucker Slams Media’s ‘Patronizing’
Double Standard On mad-Maxine Waters

by PETER HASSON
Fox News host and Daily Caller co-founder Tucker Carlson slammed on Monday the media’s “patronizing” silence... on Democratic California Rep. mad-Maxine Waters’ attendance at a Nation of Islam convention. As first reported by The Daily Caller, mad-Waters attended the 2002 convention where Nation of Islam leader Louis Farrakhan defended Palestinian suicide bombers and praised Iran for arming Palestinian terrorists. The Nation of Islam is a viciously anti-Semitic group that preaches the inherent inferiority of white people. “Isn’t it a little patronizing for the press to give mad-Maxine Waters a pass on associating with someone like this as if it doesn’t matter?” Carlson asked. “They have so low expectations for her that they don’t call her on it, that’s patronizing I think.”... http://dailycaller.com/2018/02/19/tucker-media-maxine-waters/?utm_m...

VIDEO at the site.
.
Texas Sheriff Who Allows Teachers To Carry
Firearms Leaves MSNBC’s Jaw On The Floor

by BENNY JOHNSON
{ dailycaller.com } ~ The debate over guns in America has surged again to the forefront of conversation in the wake... of the horrific school shooting in Florida last week. A deranged gunman went on a rampage through the Stoneman Douglas High School in Parkland, Florida, killing 17. Many are calling for stricter gun laws in the wake of the shooting.  One of the students of Stoneman Douglas said this weekend that his coach, who died in the shooting, would have then able to confront the gunman had he been able to carry his firearm to school.  While the idea of arming teachers is a controversial one nationally,  a school district in Texas has been arming their teachers for over 4 years. The Argyle School Independent School District decided in 2014 to allow highly trained members of staff to carry guns on campus to prevent mass shootings...Israel teachers have been armed for years and no attacks by terrorist been done.
http://dailycaller.com/2018/02/19/texas-sheriff-who-allows-teachers-t...
VIDEO at the site.
.

.
It's the Culture, Not the Guns

by Arnold Ahlert:  Last Wednesday, Andrew Pollack was  photographed  while searching for his daughter, Meadow, who was a student at Marjory Stoneman Douglas High School in Parkland, Florida. Tragically, he learned Meadow was one of the 17 murder victims.