by rickwells.us
{ rickwells.us } ~ Democrats are notorious for standing on the backs of the victims, usually of their own creation, in order to gain political benefits... The shooting at the campus of Douglas High School in Florida, which they kept as an indefensible gun-free zone, are the latest in that despicable practice. In efforts which share the familiar look of the mainstream media propagandists collaborating with scum-George Soros front groups providing funding and the opportunity for a group of publicity hound children who survived the Florida attack to become political pawns in the globalist master plan.  The kids likely have libtard parents who have no problem with trusting the government won’t turn to tyranny if the nation is disarmed or with violating our Second Amendment rights. Maybe the children see themselves as the next commie leader in the mold of Hussein liar-nObama, Kamala Harris, Dianne Fein-stein or Richard “Stolen Valor” Blumenthal, pushing disarmament and the myth that tyranny only happens elsewhere. It’s more likely they don’t know any of those names other than liar-nObama and perhaps sugar daddy scum-George Soros...  https://rickwells.us/dems-soros-use-leftist-shooting-survivors-as-d...

by Matthew Vadum
{ frontpagemag.com } ~ The anarchist thugs of Antifa are branching out into obstructing immigration law enforcement... apparently no longer content with shutting down conservative speakers and beating up those they promiscuously label “fascists.” A case in point was last Thursday, Feb. 15, when about 70 activists surrounded a U.S. Immigration and Customs Enforcement (ICE) van that was attempting to enter the Metropolitan Detention Center in Los Angeles. The anarchists chanted “no more deportations,” “Trump and Pence must go,” “f--k ICE,” as well as slogans in the Spanish language. Although the two ICE agents in the van at the time were unharmed and there were no arrests, the action was viewed by anarchists as a successful test of the tactic. Antifa intends to expand its use of the approach. Given Antifa’s ugly track record, this could mean violent, terroristic attacks on law enforcement...   https://www.frontpagemag.com/fpm/269362/antifa-thugs-target-ice-mat...
.
Man jailed for jihad writes for Washington Post 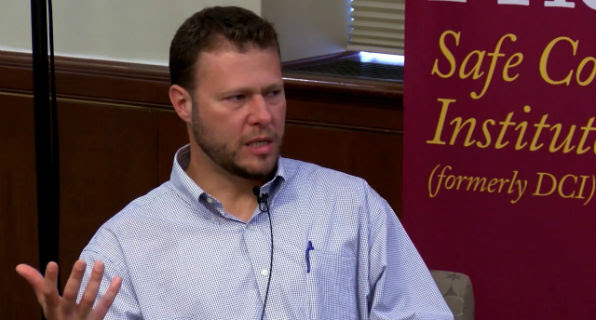 by ART MOORE
{ wnd.com } ~ Employed as a communications specialist for the Council on American-Islamic Relations in Washington, D.C... police stopped Randall “Ismail” Royer for a traffic violation in September 2001. The officers found in Royer’s automobile an AK-47-style rifle and 219 rounds of ammunition. Two years later, Royer was indicted along with 10 others for conspiring to levy war against the United States and to provide material support to al-Qaida. For agreeing to cooperate with the government, he pleaded guilty to lesser weapons and explosives charges, and was sentenced to 20 years in prison. Now, released after serving nearly 14 years of his sentence, Royer, an American convert to Islam, says he is a changed man and rejects terrorism...   http://www.wnd.com/2018/02/ex-cair-official-imprisoned-for-jihad-wr...
.
Aliens Who Didn't Register Under DACA:
Lazy or Committing Fraud?

by Michael Cutler
{ frontpagemag.com } ~ The President’s Chief of Staff, Gen. John Kelly, recently raised some eyebrows... when he postulated that many illegal aliens who could have applied to participate in the liar-nObama administration’s illegal DACA program may have simply been too lazy to apply for temporary lawful status when the program was in effect. Although General Kelly had a highly successful and laudable record of service to our nation in the United States Marine Corps, he never enforced nor administered our nation’s immigration laws.  His lack of experience and subsequent lack of understanding about the challenges that confront those who enforce and administer our immigration laws have apparently caused him to come to a very wrong and, indeed, dangerous conclusion, which may have influenced President Trump’s decision to provide lawful status and a pathway to United States citizenship to three times as many aliens as were covered by the liar-nObama administration’s DACA program. Gen. Kelly may not realize that many of those applicants may be successfully gaming the immigration system by committing immigration fraud. They didn’t enroll not because they were lazy but because they weren’t present in the United States during the enrollment period and  would falsely claim they were if a new program were to take effect.  Indeed, if this program is created, many applicants might enter the United States in the months ahead, but claim they have been here for years...   https://www.frontpagemag.com/fpm/269360/aliens-who-didnt-register-u...
.
The Russians Didn’t File a FISA Warrant

by sundance
theconservativetreehouse.com } ~ For those following the increasingly curious case against General Mike Flynn, events took another unusual turn yesterday as Special Counsel Robert Mueller -with agreement from all parties- filed a motion for a protective order to seal documents. These are documents compelled on behalf of the defense, by Judge Emmet Sullivan, prior to sentencing.

On November 30th, 2017, Mike Flynn signed a guilty plea; ostensibly admitting lying to investigators. The plea was accepted by Judge Ruben Contreras; who is also a FISA court judge. Six days later, December 7th, 2017, Judge Contreras “was recused” from the case without explanation. The case was reassigned to DC District Judge Emmet Sullivan.

The Contreras recusal always seemed sketchy. If the conflict existed on December 7th, wouldn’t that same conflict have existed on November 30th, 2017?

On December 12th, 2017, Judge Sullivan gave out a rather unusual set of instructions to Robert Mueller. The instructions included Sullivan telling Mueller to turn over to the Flynn defense anything that could be considered exculpatory:

On January 31st, 2018, Robert Mueller requested a delay of sentencing pushing the sentencing phase into May of this year. And then yesterday, February 14th, 2018, Mueller asks for the information he is turning over to be sealed.

As Nick Falco points out on Twitter: “We haven’t seen text messages between Strzok-Page mentioning Flynn or around the time of Strzok-Flynn Interview on January 24, 2017. I’m sure Horowitz has the texts & has given them to the Mueller team. Starting today, Flynn will have access to this evidence for his defense.” … “Today’s Stipulated Motion gives the Flynn team access to ALL evidence, including the FD-302’s, as long as the evidence is kept secret.”

♦Going back to the 30,000 foot overview, the substance behind the application for the FISA Title-1 surveillance warrant is the eventual basis for the FBI’s surveillance of Mike Flynn.

That FISA application is now evidenced to have relied heavily upon the ‘liar-Clinton-Steele Dossier‘; and with discoveries from the Devin Nunes memo, and Chuck Grassley memo, there is strong evidence of gross and intentional misrepresentation within the application.

That puts the spotlight back upon the FISA judge who approved the application despite the transparent flaws, political omissions and factual weaknesses. If Rudolph Contreras signed off on the Title-1 surveillance warrant, Judge Contreras is now in question.

Nunes and Goodlatte’s requests were made to presiding FISA Judge Rosemary Collyer.

Coincidentally or not Judge Rosemary Collyer might have been the Presiding FISA Judge who -holding concerns over ongoing FISC revelations in late 2017- recused Rudolph Contreras from further contact with the Flynn case. The other option for a forced recusal would the Chief Justice of the Supreme Court, John Roberts.

This brightens the spotlight upon Judge Contreras and his involvement in the FISA Title-1 surveillance authority.

Additionally, if you think about when everything began to break out from the headlines it would be intellectually dishonest not to note all of the FBI conspiracy revelations happened immediately after Mike Flynn signed the guilty plea. The timing appears to show White Hats within the intelligence apparatus hitting back against the DOJ and FBI for perceived injustice against Flynn.

Regardless of how you view events there’s something about the use of the liar-Clinton-Steele Dossier within the FISA application, and the subsequent approval therein, that doesn’t pass the proverbial sniff test. If Contreras was the authorizing judge; and it seems increasingly likely he was; this puts the judge in the center of the scandal.

What looks even worse for Contreras, amid the backdrop of a conspiracy of intent, is his direct relationship to former Attorney General scum-Eric Holder, President liar-nObama’s wingman:

2012 […] From 2006 until his appointment, Contreras was chief of the civil division in the U.S. attorney’s office in Washington. He’s the third person to hold that job before being appointed to the D.C. court, joining Chief Judge Royce Lamberth and Judge John Bates.

Contreras began his career at Jones Day law firm after earning his J.D. in 1991. Gregory Shumaker, partner-in-charge of Jones Day’s Washington office, spoke yesterday about first meeting Contreras when Shumaker was running the firm’s summer associate program. He said Contreras had a gift for connecting with people, a skill that would serve him well on the bench.

In 1994, Contreras was hired by scum-Eric Holder Jr., then the U.S. attorney for D.C., to join that office. Mark Nagle, vice president and general counsel for Marriott Vacations Worldwide Corp. and Contreras’ predecessor as civil division chief, spoke about Contreras’ many victories, including his time leading the city’s Medicaid fraud unit.

In essence there’s a possibility Judge Contreras might have granted a little more leeway for the ideological endeavors of the DOJ given his prior personal and professional relationships. Was he willfully blind to the weakness and politics within the FISA application?

All of this is likely to come out as the outcry to release the FISA warrant gets stronger. Chairman Devin Nunes and Chairman Bob Goodlatte are directly asking the FISA court for information.

The Department of Justice will likely agree to more releases of investigative documents as IG Horowitz finishes his 14-month-long OIG investigation into the entire enterprise. The inspector general has been looking at the politicization, and subsequent weaponization, of the DOJ and FBI and his report will come out well in advance of the Flynn sentencing.