To Obama & Congress - We Have Your Bags Packed

It’s time to write a letter to “Congress” and discuss their reckless spending and their reluctance to be good stewards of our money. Obama and Congress have lost our trust – we actually are beginning to realize that they in fact are our enemy. OBAMA & CONGRESS YOUR BAGS ARE PACKED!

“We need to relay the message in plain English don’t spend more than you take in – it’s called a budget.” We’re not interested in each politician’s “sacred cows,” and pork delights – we’re interested in a Government that works for the people, not against the people.

The House of Representative’s job is to insure that neither political party misuses our money for personal ideology or interests. The House has lost touch with reality, they not only allow misappropriation of our money they are the problem – they’ve sold their souls to Obama, DEMS, Unions, Lobbyists, US Chamber of Commerce and personal political gain.

They allowed our 787 billion dollar stimulus money to go to Obama’s big bundlers, public sector unions and very wealthy Democrats and corrupt lenders who were in charge of the “housing bubble.” All together about 75 percent of loans and grants have been given out to companies run by Obama supporters. The stimulus money supposedly was to get our economic wheels rolling again through job creation, but Congress didn’t honor that commitment.

Yearly our politicians orchestrate the dog and pony show pretending to be worried about the senseless spending by the Government and promising to get a handle on the situation via some kind of off the wall budget that none of us understand or ever comes to fruition.

The “debt ceiling” fiasco always ends up allowing the Government to continue their spending binge, which in all reality is spending money frivolously that we the people don’t need or benefit from. Neither Republicans or Democrats have learned from the devastating experience European Countries have suffered due to the insane philosophy of spending more than you take as an answer to our problems.  This  always ends up in a lose, lose situation for the hard working class (the taxpayers.)

Please excuse me, I understand that one should not express their personal opinions and thoughts when writing, but as a grandmother of eight awesome angels and four adult children today I’m climbing on my soapbox.

I really don’t care if Congress and the President have to take a hit on salaries – let’s think about the very little amount of time that Obama spends working for us versus his partying, lavish vacations and using our Air force One like it’s his personal taxi cab. Air force One should only be used for emergencies at this time. We’re broke, our Nation has an extremely high National Debt with an ungodly amount of interest that goes with this debt created by Obama and Congress.

Congress should be paid only for time in their offices working for “we the people.” Their days off which are more than days on the job would allow them to get a second job, because they certainly have proved that they’re incapable of running a Government for the people, of the people and by the people.

Let’s quit carrying these sophisticated politicians (that like the “entitlement society”) think we owe them a living, we don’t. Let’s get a budget, which will mean cutting out a mass of redundant Government programs, stopping the senseless funding creating Government dependency.

Time to rescue all people who have been entrapped by our Government – create jobs, jobs and more jobs help people get off the food stamp and entitlement kick. Dump Obamacare and while we’re at it dump Obama, Podesta, George Soros, The US Chamber of Commerce, the old Republicans establishment and Hillary Clinton.

Like Rick Perry said, retrieve our money and start at “zero” for foreign aid – if money is handed out to foreign Countries , it is to be monitored noting who is receiving the money, how much, what it is being used for and damn sure verify that every penny sent to foreign Countries is monitored and accounted for…  Taxpayer’s money is being used to fund the Muslim Brotherhood and terrorists!

Ditch the politician’s sacred cows and pork delights, downsize the Government which means ruthlessly cutting their deranged spending agenda. Do not spend one penny more than is taken in – it’s called a budget and millions of Americans would be most willing to show politicians how to budget since they seem to be in “La La” land.

It’s time to quit talking and demand action from those who pretend that they’re working for Americans and America. Every politician is a public servant who was hired to work for us – I really don’t care about their political elite clubs and dirty schemes behind closed doors. It’s time to “take back our Country, America.”

Thanks for lending an ear, 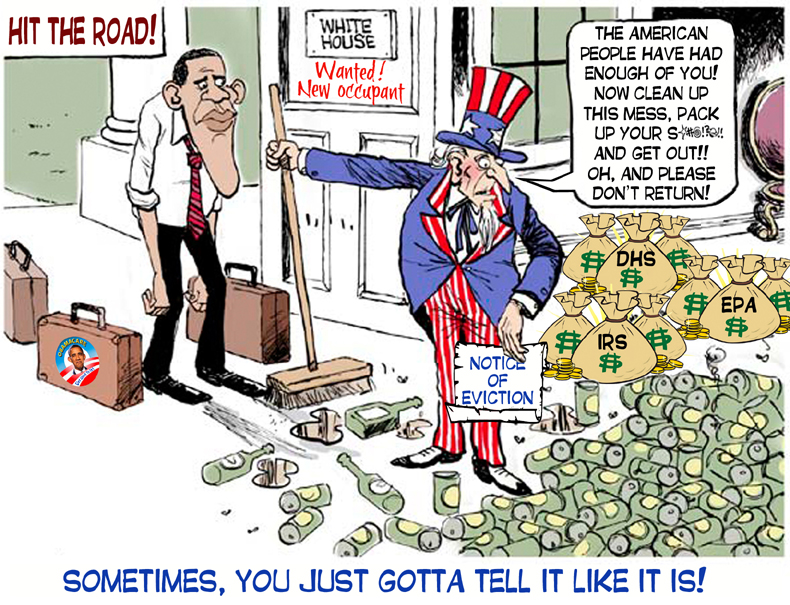