Good question: “If Nancy Pulosi thinks that $1,000 is ‘crumbs,’ why does she support a law that requires every American who contributes more than $200 (and as little as $10 in some states) to a candidate, political party, or PAC, to be reported to the government, with their names, addresses, and employment information published for the world to see?” —Bradley A. Smith
For the record: “There are 690,000 official DACA registrants and the president sent over what amounts to be two-and-a-half times that number, to 1.8 million. The difference between 690 [thousand] and 1.8 million were the people that some would say were too afraid to sign up, others would say were too lazy to get off their asses, but they didn’t sign up.” —White House Chief of Staff John Kelly
Amazingly, this rube was once the attorney general… “If one looks at the dismissal of James Comey and the reasons why the president told Lester Holt he did that … I think you technically have a case of obstruction of justice.” —scum-Eric Holder
Braying Jackass: “That apology [by the IRS for targeting conservatives] was unnecessary, unfounded and inconsistent, it seems to me.” —scum-Eric Holder
Non Compos Mentis: “The most common complaint about my course [titled ‘White Racism’] that I’ve encountered thus far is that anybody can be racist. They ask indignantly: What about ‘black racism’? Or what about other forms of racism they believe exist on the part of Latinos, Asian Americans and Native peoples. My answer is: There is no such thing as black racism.” —Florida Gulf Coast University professor Ted Thornhill
And last… “Does anybody know the longest consecutive time Nancy Pulosi has spoken in defense of American citizens?” —Liz Wheeler   ~The Patriot Post
https://patriotpost.us/articles/54010-thursday-short-cuts

.
.Gaetz – How Does Swamp Freak
scum-Adam Schiff Have Any Credibility Left?

by rickwells.us
{ rickwells.us } ~ Rep Matt Gaetz (R-FL) joins David Asman, who is filling in for Lou Dobbs... to discuss the Democrats’ designated stuntman, bobble-head scum-Adam Schiff (D-CA) and what he’s doing with the release of the Democrat rebuttal to the Nunes Memo. Asman says, “What the Democrats are doing, and particularly scum-Adam Schiff, he’s been around intel enough to know what you can include in a public report and what you cannot include. Apparently he put enough sensitive information in this Democrat memo that some of it is going to have to be redacted. So now he’s saying if anything is redacted this is censorship. Talk about a ploy.” Gaetz agrees, saying, “Well, you’re absolutely right, David, and I am tired of scum-Adam Schiff and other Democrats playing games with our intelligence and with the processes that we have to rely on for meaningful investigations. Here you’ve got a circumstance where clearly the Democrats have chocked this memo full of sources and methods that would hurt the American people if they were exposed.”... https://rickwells.us/gaetz-swamp-freak-schiff/ 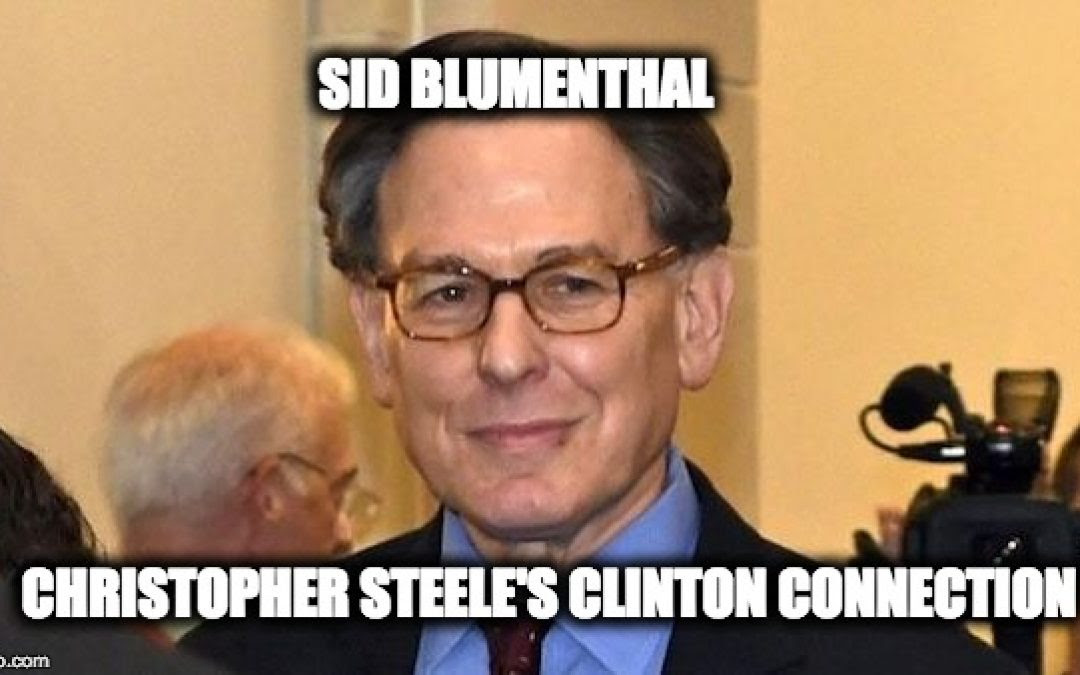 by J.E. Dyer and Jeff Dunetz
{ lidblog.com } ~ A January 2018 memo to FBI Assistant Director Rod Rosenstein from Senators Chuck Grassley (R-IA) and RINO-Lindsey Graham (R-SC)... was partially declassified and made public on Friday, 2 February. A newer version of the release was issued on Tuesday, with fewer redactions. In the memo, the senators assert that in October 2016, while he was compiling his dossier, Christopher Steele received information relevant to the dossier from an associate of the liar-Clintons, and incorporated it in the dossier. During an interview with Martha McCallum on Tuesday, Trey Gowdy implied that the liar-Clinton source was Sid Blumenthal. This is something we could have put together as likely, using previously known information.  But a newer version of the declassified portion of the Grassley.RINO-Graham memo was released Tuesday and is now available — which quotes directly from a Steele memo that hasn’t been released previously to the public but which the FBI holds – it looks like it did indeed happen...   https://lidblog.com/grassley-graham-christopher-steele/
.
New FBI Text Messages: ‘liar-nObama Wants
to Know Everything’ About liar-Clinton
Email Investigation

by Rusty
{ thepoliticalinsider.com } ~ While President liar-nObama was publicly encouraging people to “limit public discussion of facts” regarding... the investigation into liar-Hillary Clinton’s emails, he was demanding more information from the FBI behind the scenes. New text messages between FBI agent Peter Strzok and his girlfriend, FBI lawyer Lisa Page, appear to illustrate the President demanding information on the case from the agency, and quite possibly, by extension, influencing those investigating the alleged crimes. The couple exchanged messages regarding the preparation of talking points for then-FBI Director James Comey to deliver to the former President. Page said of liar-nObama: “Potus wants to know everything we’re doing.”...   https://thepoliticalinsider.com/obama-knew-hillary-emails/?utm_medi...
VIDEO:  http://www.youtube.com/watch?v=PHez38UjN7k
.
Senate Homeland Security Committee
releases report on FBI investigation
into liar-Hillary Clinton

by theconservativetreehouse.com
{ theconservativetreehouse.com } ~ Last Friday Chairman Grassley asked FBI Director Chris Wray to remove the prior redactions and declassify the underlying supportive documents... known as the “Grassley Memo”.  FBI Director Wray did not remove all redactions; but did remove most.  Here is the newest version
- https://www.scribd.com/document/370918981/2018-02-06-CEG-LG-to-DOJ-...
Toward the end of December, the FBI provided the Senate Judiciary Committee, Chuck Grassley, with FBI investigative documents (likely FD-302’s) from their contacts with Christopher Steele. According to most reasonable timing we can discover Steele met with FBI officials sometime around October 1st, 2016... https://theconservativetreehouse.com/2018/02/06/fbi-director-chris-...

by Pat Buchanan
{ townhall.com } ~ That memo worked up in the Intel Committee of Chairman Devin Nunes may not have sunk the Mueller investigation, but from the sound of the secondary explosions, this torpedo was no dud.

To persuade a FISA court to issue a warrant to spy on Trump aide Carter Page, the FBI relied on a dossier produced by a Trump-hating British spy, who was using old Kremlin contacts, while being paid to dig up dirt on Donald Trump by liar-Hillary Clinton's campaign.

Not only were the liar-Clinton campaign and DNC paying the spy, Christopher Steele, for his dirt-diving, the FBI put Steele on its own payroll, until they caught him lying about leaking to the media.

In their requests for search warrants, the FBI never told the FISA court judge their primary source was a 35-page dossier delivered by Steele that their own Director James Comey described as "salacious and unverified."

From the Nunes memo, there was, at the highest level of the FBI, a cabal determined to derail Trump and elect
liar-Clinton. Heading the cabal was Comey, who made the call to exonerate liar-Hillary of criminal charges for imperiling national security secrets, even before his own FBI investigation was concluded.

Last week, McCabe was discharged from the FBI. Seems that in late September 2016, he learned from his New York field office that it was sitting on a trove of emails between Anthony Weiner and his wife, liar-Clinton aide Huma Abedin, which potentially contained security secrets.


Not until late October did Comey inform Congress of what deputy McCabe had known a month earlier.

Other FBI plotters were Peter Strzok, chief investigator in both the liar-Clinton email server scandal and Russiagate, and his FBI girlfriend, Lisa Page. Both were ousted from the Mueller investigation when their anti-Trump bias and behavior were exposed last summer.

Filling out the starting five was Bruce Ohr, associate deputy attorney general under Loretta Lynch. In 2016, Ohr's wife was working for Fusion GPS, the oppo research arm of the liar-Clinton campaign, and Bruce was in direct contact with Steele.

Now virtually all of this went down before Robert Mueller was named special counsel. But the poisoned roots of the Russiagate investigation and the bristling hostility of the investigators to Trump must cast a cloud of suspicion over whatever charges Mueller will bring.

Now another head may be about to fall, that of Deputy Attorney General Rod Rosenstein.

If Mueller has given up trying to prove Trump collusion with the Kremlin and moved on to obstruction of justice charges, Rosenstein moves into the crosshairs.

For the heart of any obstruction scenario is Trump's firing of James Comey and his boasting about why he did it.

But not only did Rosenstein discuss with Trump the firing of Comey, he went back to Justice to produce the document to justify what the president had decided to do.

Consider where we are. Mueller is investigating alleged Trump collusion with Russia, and the White House is all lawyered up.

The House intel committee is investigating liar-Clinton-FBI collusion to defeat Trump and break his presidency. FBI Inspector General Michael Horowitz is looking into whether the fix was in to give liar-Hillary a pass in the probe of her email server.

Comey has been fired, his deputy McCabe removed, his chief investigator Strzok ousted by Mueller for bigoted anti-Trump behavior, alongside his FBI paramour, Page. Bruce Ohr has been demoted for colluding with Steele, who was caught lying to the FBI and fired, and for his wife's role in Fusion GPS, which was being paid to dig up dirt on Trump for liar-Clinton's campaign.

If Americans are losing confidence in the FBI, whose fault is that? Is there not evidence that a hubristic cadre at the apex of the FBI -- Comey, McCabe, Strzok foremost among them -- decided the Republic must be saved from Trump and, should liar-Hillary fail, they would step in and move to abort the Trump presidency at birth?

To the deep state, the higher interests of the American people almost always coincide with their own.
https://townhall.com/columnists/patbuchanan/2018/02/06/nunes-duels-...