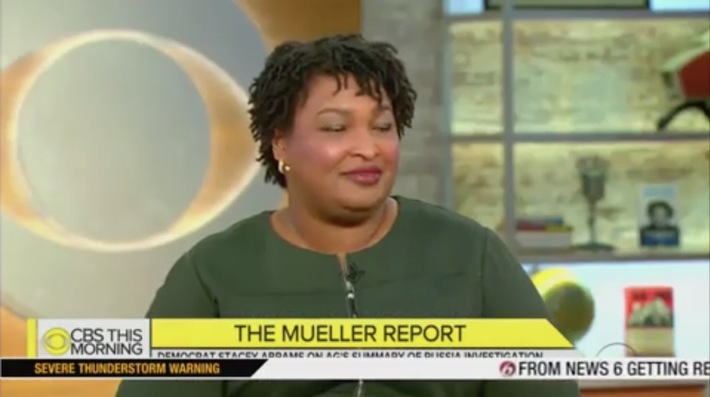 Maybe I should walk down to my nearest city hall and protest, or perhaps I should start campaigning for Abrams because she can do so much better. As you know, I am kidding because it's ridiculous that the mainstream media is pushing Abrams like she is some primary expert on things happening in the world.

I am not jealous of her so if she wants to make paper, make it so. However, watching the media fawn over a losing candidate who can't seem to accept the fact she lost is troubling and tiresome. Reminds you of another woman who can't seem to get over the mountain regarding her 2016 Presidential loss.

“I do not think we can assume that what he is reported in his summary is an accurate summary of the report, but the best way to know what was said in the report is to read the report. And my belief is until we’ve seen the report, we don’t know what it says”

If Democrats want to run Stacey, feel free. She has yet to win anything so the term loser applies until she gets over that hump. Americans do not like losers. They like "winners" and those who have an inspirational story of perseverance.

Oprah Winfrey and many Hollywood types back Abrams, and now it seems the opposition media wants this woman to be more in the national eye. Hopefully, this doesn't sound too bad, but she is not the best or worst of us but to be hoisted by politics means she can be taken down by the same dangerous game.