The Front Page Cover
~ Featuring ~
Advances Despite Obstruction:
The Real Story of the Past Six Months
by Caroline Camden Lewis

by rickwells.us
{rickwells.us} ~ Democrat Senator Chuck clown-Schumer, the unconscionable hypocrite who preys upon the ignorant with the help of the greedy and lazy... had a few noteworthy seconds of comment as he orchestrated from the minority position the defeat of any liar-nObamacare repeal and replace. clown-Schumer said, “Let us vote against skinny repeal and let’s work together to improve our healthcare system in the way our Founding Fathers intended us to improve it.” Because a right to government mandated socialized medicine is such a consistent theme throughout the Constitution, right clown-Chuck? Let’s put his blather into perspective. The liar-nObamacare law was passed only by Democrats who stuffed it down the throats of Americans and Republicans who knew it was a disaster. As it crashes and burns, just as it was predicted and probably intended to do, it does so up to this point having never received a single Republican vote in favor of it... http://rickwells.us/blasphemous-schumer-gop-join-dems-founding-fath...
VIDEO:  http://www.mrctv.org/videos/schumer-our-founding-fathers-intended-congress-improve-our-healthcare-system
.
One-and-a-Half Cheers for Claremont McKenna 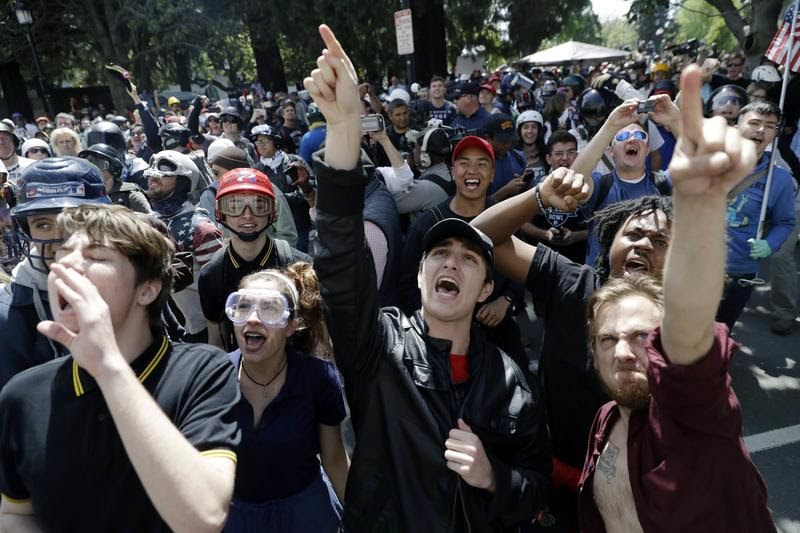 by Rachelle Peterson
{realcleareducation.com} ~ Free speech requires regular enforcement. That’s why Claremont McKenna College’s decision to punish seven speech obstructers is—for the most part—worth celebrating... On April 6, 170 people marched to Claremont McKenna’s Athenaeum, disassembled a fence newly built to restrain protests and blocked the entrances. Claremont’s security officers failed to control the crowd. Manhattan Institute Senior Fellow Heather Mac Donald, scheduled to address a live audience regarding her book, “The War on Cops,” was forced to speak to a camera. Months later, Claremont announced it has identified twelve students as protest participants, of which it formally charged ten and punished seven. The college will suspend three students for one year, suspend two for one semester and place another two on “conduct probation.” A three-member panel determined the severity of discipline “based on the nature and degree of leadership in the blockade... http://www.realcleareducation.com/articles/2017/07/25/one-and-a-hal...
.
Assassination Fantasies 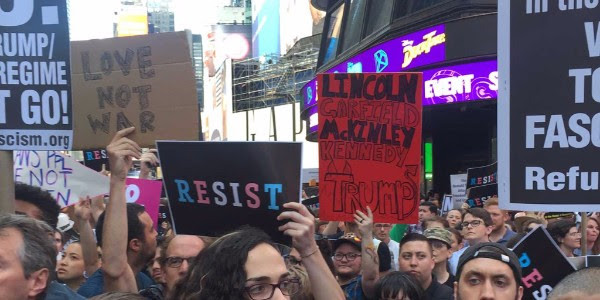 by Seth Barron
{city-journal.org} ~ Following President Trump’s declaration on Twitter Wednesday that transgender people would not be permitted to serve in the armed forces, protesters converged on Times Square... Assembling in front of the Armed Services Recruiting Station, several hundred people cheered as local elected officials and LGBT activists denounced both the decision and President Trump generally. Most of the crowd held small printed signs reading, “Resist”; others waved the familiar “NO!” signs from the Revolutionary Communist Party-backed Refuse Fascism movement. A few handmade signs stood out in the relatively compact crowd, in particular one that read, in black against a red background,
Lincoln
Garfield
McKinley
Kennedy
Trump
The first four names on this list, of course, are the presidents murdered in office, in chronological order; the last embodies the seeming wish of many on the American Left that someone put him on it for real. As seen in the picture accompanying this article...These people are sick. https://www.city-journal.org/html/assassination-fantasies-15372.html
.
Nearly All Of U.S. Drinking Water
Contaminated With Cancer Causing Chemicals

by Aaron Kesel
{activistpost.com} ~ The Environmental Working Group, a non-profit research organization environmental watchdog, released a searchable database Thursday that shows almost 50,000 public water systems in the U.S. are contaminated with dozens of harmful chemicals... Some of the chemicals found in your drinking water include – arsenic, hexavalent chromium, radiation, chloroform, perfluorooctanoic acid,  Bromodichloromethane, Dichloroacetic acid, Barium, and Uranium; and that’s just scratching the surface of the 250-plus contaminants the group discovered. EWG researchers spent the last two years collecting data from independent state agencies and the EPA for drinking water tests conducted from 2010 to 2015 by 48,712 water utilities in all 50 states and the District of Columbia. Researchers tested the utilities for approximately 500 different contaminants, finding a whopping 267 contaminations of Americans’ water supplies... http://www.activistpost.com/2017/07/report-us-drinking-water-contam...
.
No More 'Bailouts' for Insurers,
Lawmakers Over 'Imploding' liar-nObamacare

by Wanda Carruthers
{newsmax.com} ~ President Donald Trump on Saturday warned Republicans that if they did not pass healthcare reform soon, he could end the employer contribution for their healthcare coverage... He went further to suggest the end result would be an end to insurance bailouts as well as "bailouts for Congress" come election day. "After seven years of 'talking' Repeal & Replace, the people of our great country are still being forced to live with imploding liar-nObamaCare!" Trump tweeted. "If a new HealthCare Bill is not approved quickly, BAILOUTS for Insurance Companies and BAILOUTS for Members of Congress will end very soon!"... http://www.newsmax.com/Politics/Obamacare-healthcare-legislation-Pr...
.

.
Advances Despite Obstruction: The Real Story
of the Past Six Months

By Caroline Camden Lewis:  Russia. Twitter. Impeachment. These are the words that USA Today, CNN, The New York Times and the rest of the Leftmedia want you to believe describes the first six months of Donald Trump's presidency. While they choose to dwell on dead-end stories from eight months ago, President Trump has been putting the American people, jobs and safety first. And in spite of Democrat obstructions to his political appointments, he has still accomplished good things for America.
Trump's pro-growth policies have strengthened the economy and created jobs. The Dow Jones Industrial Average has increased 17% since Election Day last year. In this year alone, it has already hit new highs 25 times. In addition, since January, the American economy added 863,000 new jobs, 821,000 of which are non-government jobs, including 79,000 construction jobs, 42,000 mining and logging jobs, and 41,000 manufacturing jobs.
Trump takes regulation as a barrier to growth seriously. He has signed 14 Congressional Review Act resolutions to end Barack liar-nObama's growth-choking regulations. He signed an executive order that requires two old regulations to be eliminated for every new regulation implemented. According to the American Action Forum, these regulation reductions have cut costs by $70 billion.
Trump withdrew from the Paris Climate Accord, participation in which could have cost the American economy $3 trillion dollars, 6.5 million industrial sector jobs and 3.1 million manufacturing jobs, according to NERA Consulting.
On trade, Trump withdrew from the Trans-Pacific Partnership (TPP) and is renegotiating the North American Free Trade Agreement (NAFTA). He has sped-up the permitting and approval process of Liquefied Natural Gas (LNG) export terminals, including the Lake Charles LNG terminal in Louisiana. He has also increased U.S. oil exploration by approving the Keystone XL and Dakota Access pipelines, which has created 42,000 jobs and $2 billion in earnings. That success is despite ecofascist collusion with Russia to stop fracking.
Trump is restoring the Rule of Law to immigration. He ordered the hiring of 10,000 new Immigration and Customs Enforcement (ICE) officers, including 5,000 border patrol agents. Compared to this time last year, illegal border crossings have been reduced by 53%, Enforcement and Removal Operations conducted by ICE increased by nearly 40%, and arrests of criminal aliens have increased by 20%.
Under Trump's leadership, the Department of Veterans Affairs has restored integrity by firing more than 500 employees, suspending 200, and demoting 33. Trump also signed legislation that allows our veterans to seek medical care outside of the VA system.
Rather than leading an apology tour, President Trump supported the opening of the Global Center for Combating Extremist Ideology in Saudi Arabia, which helps Muslim-majority countries counter radicalized minorities. He understands that extremist ideology, not lack of "understanding," is the root cause of radical Islamic terrorism.
President Trump has worked with our partners and allies in the Middle East to combat the Islamic State and Iraqi forces have recaptured Mosul, a huge victory. In addition, the U.S. recently sanctioned 16 entities and individuals who have supported Iran's military in the development of military equipment.
The president has supported the dignity of human life. On the third day of his presidency, Trump reinstated the Mexico City policy, which prohibits non-governmental organizations (NGOs) that receive federal funds from advocating or providing abortions.
Meanwhile, he's draining the swamp of government lobbyists through an executive order that bans executive branch political appointees from becoming lobbyists for at least five years after they leave their post.
Finally, the biggest win of all: President Trump fulfilled his promise to the American people by nominating Neil Gorsuch to the Supreme Court.
Despite — or, rather, because of — these great accomplishments, President Trump has faced needless obstructions to his appointments and nominations. Consider this: The Senate has confirmed just four of 135 judicial vacancies, seven of 24 nominations for the Department of Defense, three of 29 nominations for the Department of Justice, three of 13 for Health and Human Services and less than half of his nominations for the Department of Homeland Security. In total, the Senate has confirmed 23% of Trump's nominations. At about the same time in liar-nObama's first term, the Senate had confirmed 69% of his nominations.
This not only highlights the aggressive obstructionism of the Democrats but also gives context for why the Trump administration appears to be running with less fuel. It has less fuel — by Democrat design. Democrats have purposefully attempted to slow the confirmation process so that the Trump presidency will be understaffed and thus unable to achieve his policy goals.
And yet... Despite these obstructions and the resulting understaffed administration, President Trump has been able to strengthen the economy, increase jobs, reduce crime and illegal immigration, protect human life abroad and achieve a victory over the Islamic State in the recapturing of Mosul. All of this without taking a salary, but rather donating his first six months' salary to the National Park Service and the Department of Education. These accomplishments, in spite of the purposeful obstructions by Senate Democrats, reveal a president who has done more to achieve safety, prosperity and human flourishing than anything we saw in the previous eight years. For this, he deserves our gratitude and support. ~The Patriot Post
https://patriotpost.us/digests/50427