Kavanaugh and the Depth of Democratic Evil 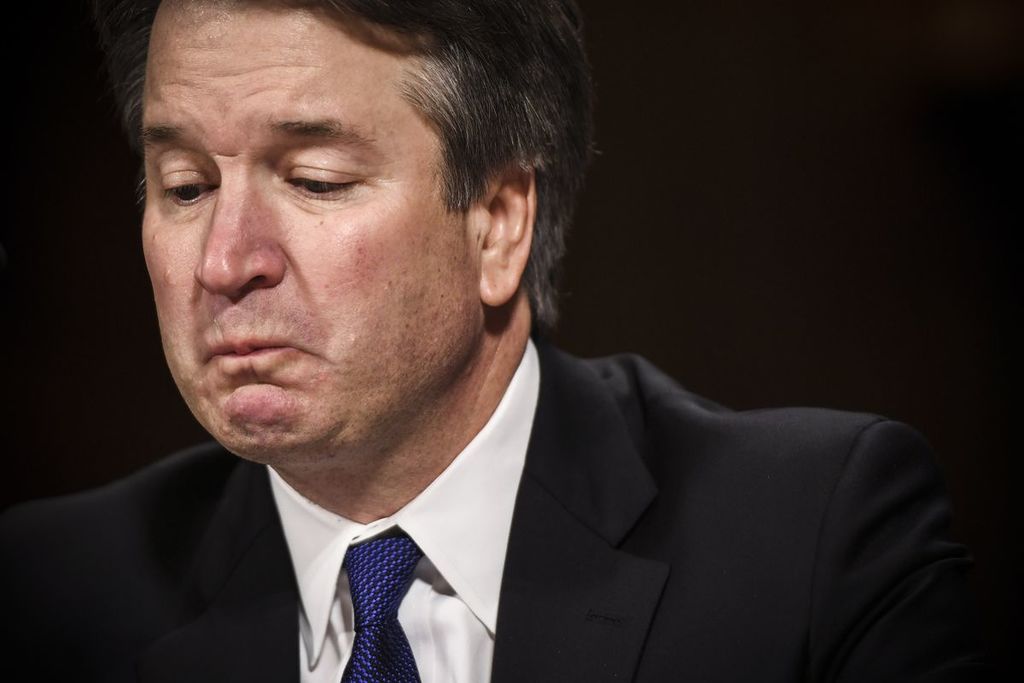 Like many of my fellow Americans, I wept for Brett Kavanaugh watching him deliver his powerful, heartfelt and facts-filled opening statement at the hearing. Witnessing the evil Democratic smear machine's destruction of this great man's character and life was heartbreaking.

Decent people saw and felt the pain and suffering cruelly inflicted upon Judge Kavanaugh, his wife and children by democrats' outrageous lies to block his confirmation. And yet, after the hearing, the grotesque American left relentlessly tripled down on their demonic mission to destroy Kavanaugh and his family. Democratic talking heads continue to sell their absurd lie that Kavanaugh is a gang rapist, ignoring facts he gave proving his innocence. Democratic Sen Dianne Feinstein and her minions have no shame, no regrets, no morality and no decency; laser-focused on blocking Kavanaugh and Trump at any and all cost – throwing the truth under the bus.

For years, I have tried to sound the alarm to my family that as a black conservative political activist, I am engaged in a battle of good versus evil rather than differing well-meaning political views. The American left is evil; anti-Christian, anti-American and anti-freedom. Nothing proves my point more clearly than democrats' deviant evil attempt to keep Kavanaugh, a Christian constitutional conservative off our nation's highest court.

Democrats fear Kavanaugh on the supreme court will throw a wrench into their ability to kill babies as late as the date of birth. The abortion doctor delivers the entire body except for the baby's head. He then shoves scissors into the brain from behind to kill it. Abortion mill staffers say that upon hearing screams of partially birthed babies they have soured on the horrific procedure. https://bit.ly/2DMLtoK Democrats celebrate every abortion because of their perverted belief that killing babies “saves the planet”.

The Bible speaks of the American left's folly. “They exchanged the truth of God for a lie, and worshiped and served what has been created (the earth) instead of the Creator (God)”. (Romans 1:25) Democrats worship the planet while denying God's existence and seek to ban Him from the political arena.

God commanded Adam and Eve, “Be fruitful and multiply, and replenish the earth, and subdue it” (Genesis 1:28) The American left foolishly believes themselves smarter than God and always seek to function against His will and original intentions. We are battling evil folks.

God said marriage is between one man and one woman. (Genesis 2:24) The American left said, screw that! Leftist activists on the supreme court opened the door for marriage to be whatever combination conceivable. We are ordered to embrace these combinations, betraying our biblical faith, or suffer criminal consequences. https://bit.ly/2CABRfX

From the destruction of Brett Kavanaugh to the American left's war on our brave men and women in blue to dragging down historic monuments to teaching our kids to hate their country to government mandating that 4 year old pre-k students be taught that transgender-ism is good https://bit.ly/2DF1VHi

Folks there is an undeniable evil spiritual force driving the behavior of the American left. How else can you explain why igniting the anger of the American people and financial consequences that follow does not stop major corporations from supporting leftists implementing their divisive and hate generating anti-American, anti-Christian and anti-freedom agenda.

Here are a few examples.

The playing of our National Anthem is no longer televised before NFL football games. Clearly, the NFL and networks know seeing multimillionaire athletes disrespecting our military, police and country is highly offensive to football fans. And yet, the NFL continues to pander to its spoiled-brat employees.

Nike selected anti-American activist Colin Kaepernick to be its spokesperson despite enraging Americans to the point of burning Nike products. https://read.bi/2Q5YXxV

These are spiritual attacks from within on America.

Homosexuals are only 1-2% of the population. So why did Wells Fargo Bank deem it urgent to produce an ad pandering to lesbians, which ignited a national boycott? https://bit.ly/2Nm9qr0

Permitting men who claim to feel like women (transgenders) in women restrooms has led to at least 21 attacks on women. https://bit.ly/2NNSMAX And yet, Target celebrated opening its restrooms to men, putting moms, grandmothers, sisters and daughters at risk. How on earth can Target justify its decision as being good business? It cannot. It's a spiritual thing; more spiritual attacks from within on America.

“For we wrestle not against flesh and blood, but against principalities, against powers, against the rulers of the darkness of this world, against spiritual wickedness in high places.” Ephesians 6:12

For the past week, my wife and I have been in Texas with the Conservative Campaign Committee helping Ted Cruz defeat the evil American left's latest darling candidate Beto O'Rourke. https://bit.ly/2NGgOO9

Please contribute to Ted's campaign at his website: www.TedCruz.org

I call upon my fellow evangelicals and every American who believes in freedom and decency to vote Republican in November. The Democrats' pit-bull attack on Judge Kavanaugh confirms that the Democratic Party is emotionally and spiritually ill – evil on steroids. They must be politically defeated and stopped.

In this war of good versus evil, Trump is on the side of good – truly on a mission from God!

I THINK KAVANAUGH HAS BEEN KICKED IN THE TEETH ENOUGH TO WAKE HIM UP ABOUT DEMS. !  NOW LETS MAKE SURE HE IS PUT IN AS JUSTICE !!  HE WILL BE A GOOD ONE AFTER THIS !  HE IS A WOKE UP JUDGE !!

What if there is a more fundamental flaw with this scenario - that Christine actually has a clinically relevant condition - often called "pathological (as Jim Carry said "Someone Stop Me!) liar. I don't say this pejoratively, but in a clinical sense. C's first recounting of her experience until AFTER JK's mother adjudicated against her mother, and then only after JK was up for a Fed Judge position, Then, JK entered "the story". At that time, CF lost control of her story, It became someone else's story; a political agenda. for nearly 20 years, she obtains 2 Masters and a Doctorate in Clinical Psychology. There she learns how others have developed and presented their cases (real and not real as that is what is taught in Psych classes), and then the BIG opportunity comes up! Who better than she to orchestrate (with a credible history) a subversive attack.

On the other hand, how realistic is it to label JK as a pathological liar? I can't as he has been too often challenged, even if he HAD done all these allegations, no way they would have survived the test of time.

Clearly, this is a rather sophisticated attack on food, as Mr. Marcus has so eloquently articulated. It is about using both CF and JK for a purpose completely opposed to what the correct, and already established protocols would have handled: petition or complaint, enrollment, process, conclusion. It would be obvious on the onset, that a pathology exists in this scenario and that pathology is what should be investigated. Circumstances count, but circumstances can be credibly conjured because of the passion and intensity of pathological mental issues!

There should be a comprehensive psychological exam, because, JK's life is on the line. His ability to work again. If this festering wound is not healed, and the perpetrators revealed so that this can be screened and rooted in the future, the very essence of the situation - JK being reviewed for Supreme Court Justice - begs a cleansing! The source of this travesty needs to be revealed, CF needs professional psychiatric help and now most likely JK, his family, close friends, and court associates. PTSD could now plague people we have in important positions. Resolution is a matter of discovery of the perpetrators. The FBI should find the source of this contention outside of these two, while a clinical review of the complainant is conducted - including her circle of family, social, university and business associates. A pattern will come up. And the timing of her "story" as it became a specific weapon for her and her new found advocates.