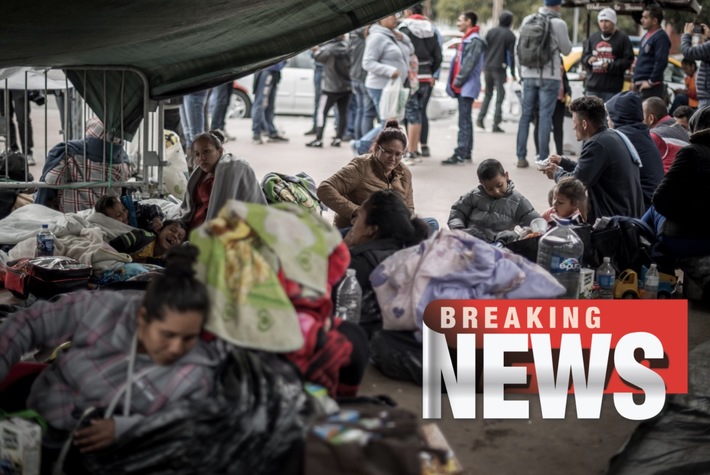 I guess all it took was President Trump floating the moving the illegal caravan asylum seekers to sanctuary cities for the 9th Circuit Court of Appeals decision to be reversed.

Earlier in the week, a federal judge on the 9th Circuit Court of Appeals decided that Trump's policy to send "asylum seekers back to Mexico until their cases could be heard" should be blocked. Trump then floated the idea of moving these illegals to Democrat-led sanctuary cities, and now this new decision appears out of the blue from a federal appeals wipes out the earlier week's decision.

The arguments from the Democrats to block Trump's approach is ironic and telling because Democrats always try to tell us how safe Mexico is and how dangerous the U.S. is from guns- see how their arguments change depending on the progressive policy they try to advance?

A federal appeals court put a judge's order on hold Friday shortly before it would have stopped the Trump administration from forcing asylum seekers to wait in Mexico while their cases move through U.S. courts.

The 9th U.S. Circuit Court of Appeals temporarily blocked the lower court ruling from taking effect. The three-judge panel set a Tuesday deadline for civil liberties groups to submit arguments on why the asylum policy should be on hold and a Wednesday deadline for the government to argue why it should remain in place.

Judge Richard Seeborg in San Francisco ruled Monday to halt the unprecedented change to the U.S. asylum system while the groups' lawsuit moves forward. He said the policy violates U.S. law by failing to evaluate dangers migrants face in Mexico.

The government called the ruling erroneous and said it endangers the public during a humanitarian crisis at the southern border. It wants the 9th Circuit to keep the policy in place while the lawsuit is litigated, which is expected to take months and possibly years. [Associated Press]

Good call. The justice dept should let Congress and the executive branch handle this. Immigration administration is not in their powers, doctrine or area of any training and expertise.

Fleeing poverty and gang violence, the reasons cited in the article, are not valid legal reasons to seek asylum. If Mexico is so dangerous, why did they willingly walk across it on their journey to ask for asylum in America? Is it perhaps because they were told there was no chance America would turn them away, that they’d be let in no questions asked?

The sad thing is some argue it’s unfair for them to stay in Mexico because they may fear for their safety. It wasn’t too much of a concern given the fact they decided to walk all those miles and spend all those days tracking across Mexico. What’s worse is Mexico is finally starting to say enough is enough. Soon they are going to shut it down on their southern border too!

The main reason for Trump's policy is to respond to the southern border crisis that has overwhelmed the ability of border officials to detain caravan members. The narrative is that growing numbers of families are fleeing poverty and gang violence in Guatemala, Honduras, and El Salvador. The problem with that is, I didn't know our country had rid itself of poverty and gang violence.