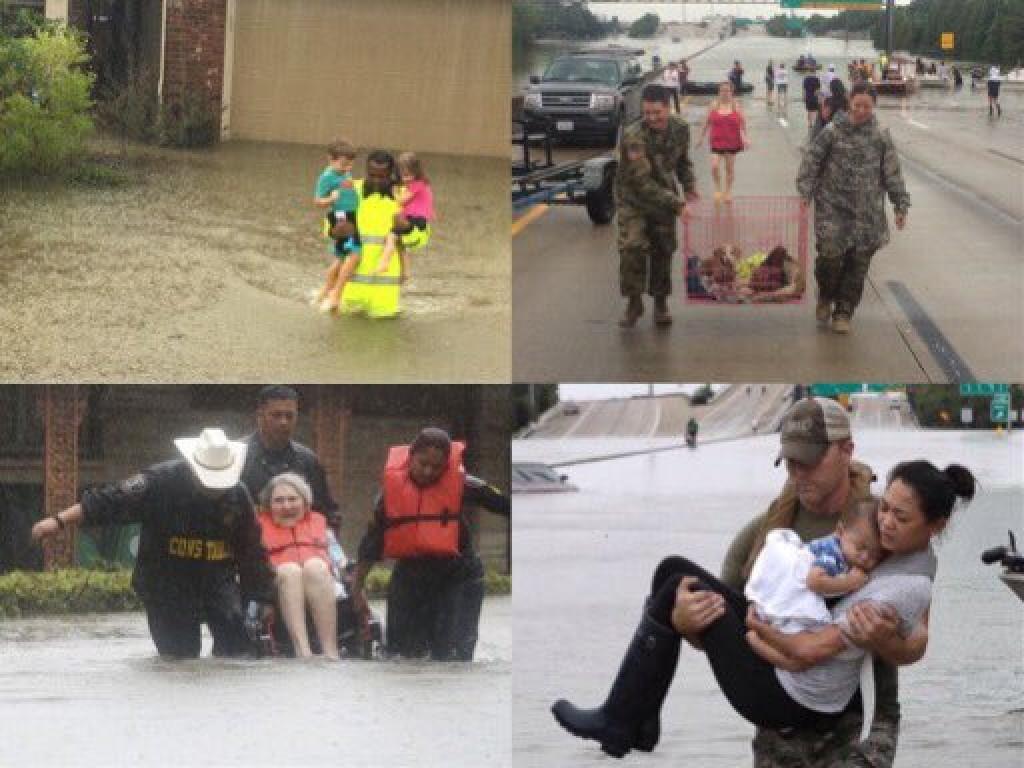 From a friend working with citizen relief efforts in southeast Texas:

Just so you know, we got a ticket, this morning, you might find interesting. The ticket came in as an extreme emergency from a mother. There was a 19 year old man that needed immediate rescue. He was restricted to his bed, on a ventilator, with only a couple minutes of gas left in their (oxygen) generator.

Emergency 911 refused to go out and help him, so our dispatcher got into our main channel on Zello and starting asking for help. Within seconds, someone on the channel responded, that he would find help. Within two minutes, the other guy was able to find a citizen with a private helicopter and a medic to go out there and try to rescue this young man.

As the helicopter touched down, sprinting into the house, the medic found a hysterical, screaming mother, watching her suffocating son dying in front of her eyes, because the generator had run out of gas shortly before.

Tonight, the man on the main Cajun Navy channel shared his secret as to how he was able to recruit a helicopter, in a matter of seconds. He simply called every phone number around the Lake Charles airport, asking if they had a helicopter. After about the third try, he found a man who said, “Yes, I have a bird, a medic and enough room. I’ll go get him.”

We later received a phone call from the mother, sobbing and in tears, that this young man was transported to the hospital, placed in the ICU and is in stable condition, tonight. She thanked the Cajun Navy for saving her son’s life, when nobody else, even 911, could or would respond.

This young man is alive, tonight, because os Ticket and the other devs in this team gave us the ability to field and respond to his mother’s request for help. You guys at os Ticket should know, even though you don’t have a single boat in the water and you’re in Alexandria, north of Ville Platte, the unofficial end of Cajun Country, you and the other devs, @fedaykin422, @alex are still a vital part of the Cajun Navy. Also I was involved in this call as medical assistance from *C.H.I.N.D.

Another heart-wrenching story from southeast Texas:

I lost contact last night with a family of 5 in Port Arthur with a newborn. They put the baby in basket on the shelf.

Later, all 5 adults are confirmed dead. The baby survived.

Pray. There's a million others still needing help. Don't give up yet folks. We have only just begun.

Please help Texas! If you can’t physically get there to help, you can volunteer with C.H.I.N.D. and help verify those still in need of rescuing.

If you need assistance getting rescued or know someone that does please fill out the attached form with all information. This helps responders track who has been rescued and who has not. Please don't submit duplicate requests. Someone will reach out to the contact.

Getting help in the Houston floods

If you or someone you know needs to be rescued in the Houston area please use the following resources:

From a buddy volunteering with the Cajun Navy in Houston:

Both volunteers have been found and are no longer with us. Please say a prayer for these two Search and Rescue volunteers and their families.

It wasn’t for nothing, they were saving lives at the risk of their own. All teams understand the inherent risk involved. This shows that it’s truly a dangerous situation and that brave men and women are willing (and VOLUNTEERING) to risk their own lives, vehicles, and boats in order to save others. When the police department chaplain announced himself over the radio, it became a very heavy moment. It’s a really difficult call to listen to knowing that it’s out of your hands while bowing your head for the chaplain’s prayer followed by a moment of silence."
-M. Miller

Let’s keep these first responders, many of whom are vets/LEOs, in our prayers, and keep the emotional and financial support coming.
~Kittyhawk