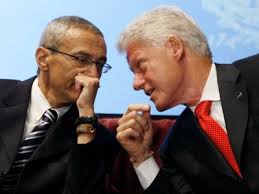 Obama has been rescued by George Soros and his “top gun” (John Podesta) - be prepared to see heads roll and many new appointments in the next 3 years.  Most of all brace yourselves as Obama signs one Executive Order after the other as we head into the 2014 November Election.

John Podesta is big on Executive Orders and defiantly intends to use them to ease Americans into his pet projects (climate change, giving our Oceans to the UN and the UN’s Millennium Development Goals (MDG.)  He says EO’s give a perception of momentum and accomplishments, which deciphered means it’s a way to shut “we the people up.”

So there’s not enough time or pages to discuss all the evil pots Podesta has his fingers in, but there is adequate time to show his political DNA and his intense desire to take over our Nation.  I realize that we’re a day late and dollar short, because like Obama no one took time out to really vet this person who will be running our Country.

What you’ll read now will pretty much give everyone a bird’s eye view of the new “De Facto President” (John Podesta) that Soros sneaked into our White House – the one who just replaced Valerie Jarrett.  If anyone thinks George Soros isn’t running our White House they’re wrong and if anyone doesn’t believe he demoted Valerie Jarrett, you’re wrong on that assumption too!

John Podesta is known as the “Clinton Fixer” or fireman that stepped in and pulled Bill and Hillary Clinton up from the political gutters and restored Clinton’s Presidential term.  Podesta’s past is sordid but difficult to track because his mentor Soros has a way of sweeping the platter for his top gophers clean leaving only dim footprints to follow.

Recently Podesta’s advice to Obama was this when referring to the GOP.  He said, “They (Meaning Obama) needs to focus on executive action (Executive Orders) given that they are facing a second term against a cult (GOP & Tea Parties)worthy of Jonestown in charge of one of the houses of Congress.”  If you remember Jonestown cult was behind one of the worst mass-murders of civilians in history.  This shows his total disregard to our political process as given to us by our Constitution.

Podesta’s number one priority is climate change and he’s already let the President know that he objects to the Keystone Pipeline and this objection is two – fold: (1) He doesn’t want to create more jobs, and (2) He must support his good old buddy ( investor Tom Steyer.)  Tom Steyer is one of the trouble makers who has spent millions of dollars mobilizing the opposition for the Keystone Pipeline and wouldn’t you know it he’s in bed with the EPA too.

John Podesta under the guise of “climate change” is going to give EPA all the authority they need thru Executive Orders to strap big and small businesses involved with energy production with many more stupid nonsensical regulations that will result  in jobs loss and many businesses will be forced to close their doors which will intensify the recession we’re already in…   Podesta will be dealing with leases on federal lands and permits for development and mining projects.

Podesta when ridiculing Obamacare made this statement, “Single payer anyone?” remarked Podesta, alluding to a major difference between Medicare and Obamacare, and one of the major policy objectives of many on the left.

Here is my rundown on why John Podesta has actually been placed in our White House to run our Country.  Obama displeased George Soros and was unable to get the job done – Soros would definitely give him a failing grade on his first five years.  In order for Soros to continue his take down of our Nation, there’s an extensive amount of clean-up needed in the White House, so he put Podesta in to pave the way for Hilary Clinton. 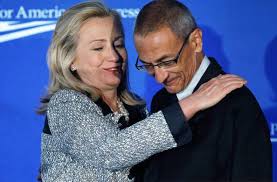 Podesta, the Clinton fixer or fireman isn’t there to help Obama but to pave the way for Hillary Clinton.  If Soros & Podesta get their way, we will have climate change in place, a one payer healthcare, laws on income inequality, amnesty, more stringent EPA regulations and higher unemployment. As businesses close their doors or lay off employees the welfare crowd grows which in the end is Soros’s end goal.

As the welfare population grows, so does the Nation’s financial crisis and economic crisis Soros & Podesta will accelerate Obama’s “redistribution” scams via Executive orders.

Three big “red flags” that demonstrate beyond a doubt which direction Obama is heading our Nation.  (1) Reid’s changes to the filibuster laws making 51 votes adequate, (2) Obama’s threat to use pen and phone against the American people, and (3) George Soros & Podesta are now running our Government.

The devastating part of our Nation’s critical problems is this - the US Chamber of Commerce and Old Republican establishment are playing right into Soros’s hands because they are fracturing the Conservative base in their attempt to destroy the tea parties.  They’re setting us up to lose the November 2014 elections and 2016 Presidential election, which is just exactly what Soros and Podesta are counting on… 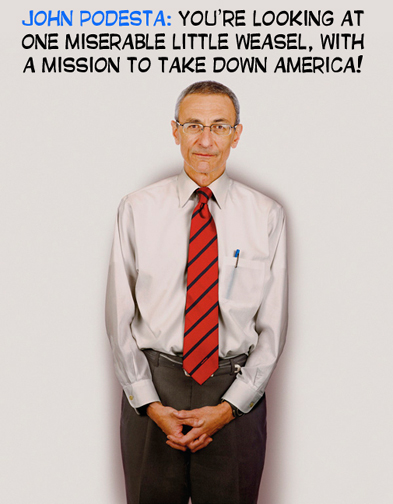