by sundance
{ theconservativetreehouse.com } ~ Something is ‘off‘ with Senator Graham’s demeanor in this interview segment; there’s a visible lack of confidence. Perhaps, and this is only a guess... Graham is wondering if President Trump has out-maneuvered the neocon position toward ultimate mid-east failure by applying the: “be careful what you wish for” approach. Ultimately if the Iraqi government asks the U.S. to leave, I doubt President Trump would be adverse to that request. In the first half of the video Senator Graham discusses his perspective on the current issues in/around Iraq and Iran vis-a-vis the U.S. killing Iranian terrorist Soleimani.  https://theconservativetreehouse.com/2020/01/05/sunday-talks-senato...

by sundance
{ theconservativetreehouse.com } ~ Secretary of State Mike Pompeo appeared on Fox News, CBS, NBC and ABC to discuss the killing of Iranian military leader Qassem Soleimani and the current status with Iran... Here’s the roundup: CBS Margaret Brennan clutches her pearls and sits aghast at the audacity of the United States to kill a terrorist on foreign soil: “what right do you have” she condescendingly snarls, positioning herself as more experienced in the world than Secretary Pompeo. With dramatic flair and purposeful constitution, Brennan rises to protect the Iranian regime. ABC George Stephanopoulos is shocked, s.h.o.c.k.e.d, that U.S. policy would mean Iranian military leader Qassem Soleimani could be killed. Fox News Chris Wallace worries “what if Iran responds”? What happens if we end up fighting with Iran? D’oh. Iran has been at war against us for decades.

By Ran Meir
{ clarionproject.org } ~ The Iranian-backed militas in Iraq say the retaliation against the U.S. for assassinating the Iranian Islamic Revolutionary Guards Corps’ Quds Force commander General Qasem Soleimani will begin Sunday night Iraqi time... according to Al Arabiya. The militias said all American forces are now targets as of Sunday. They also called upon the Iraqi security forces to stay more than a half a mile away from any place where American forces are present. Early Friday morning, American forces killed Soleimani along with his close ally Abu Mahdi al Muhandis, second in command of the Iranian-backed Iraqi militias — known as the Popular Mobilization Forces (PMO), al-Hashid a-Shabi — and head of the Iraqi Hezbollah, along with as other top leaders of the PMO. Soleimani was an arch terrorist, responsible for the death of hundreds of Americans soldiers. As commander of the Quds Force, Iran’s powerful proxy army which conducted unconventional warfare and military intelligence operations, Soleimani was the regime’s key architect and strategist of those nefarious operations. Meanwhile, in response to Iran threatening to strike 35 American targets in the Middle East, including Tel Aviv, President Trump tweeted that the U.S. has 52 sites in Iran in its crosshairs the number of U.S. hostages taken by Iran in 1979-80. 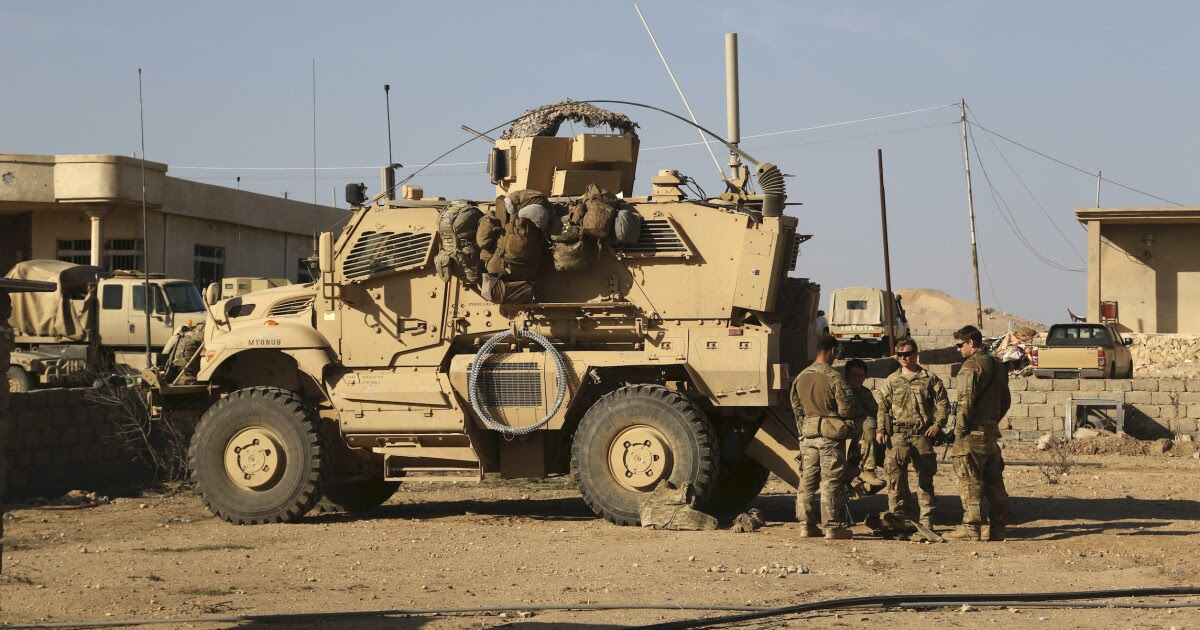 by Tim Pearce
{ washingtonexaminer.com } ~ American-led coalition forces have paused operations against the Islamic State in Iraq and Syria as officials brace for a strike by Iran... President Trump authorized a drone strike on Thursday that killed Iranian Gen. Qassem Soleimani, one of Iran’s highest-ranking and most powerful officials. Iran has vowed retaliation for the strike. Forces led by the United States in the region are now focused on preparing for a potential attack and have temporarily stopped pursuing ISIS targets. In a statement, the Combined Joint Task Force Operation Inherent Resolve said, "Repeated rocket attacks over the last two months by elements of Kata'ib Hezbollah have caused the death of Iraqi Security Forces personnel and a U.S. civilian." It continued, "As a result we are now fully committed to protecting the Iraqi bases that host Coalition troops. This has limited our capacity to conduct training with partners and to support their operations against Daesh and we have therefore paused these activities, subject to continuous review." The coalition said it remains "ready" to resume operations against ISIS but did not provide a timeline for when the effort would restart.   https://www.washingtonexaminer.com/news/us-led-forces-halt-operatio...
.
Anti-War Protests Flood U.S. Streets As
American Airbase and Other Locations Attacked 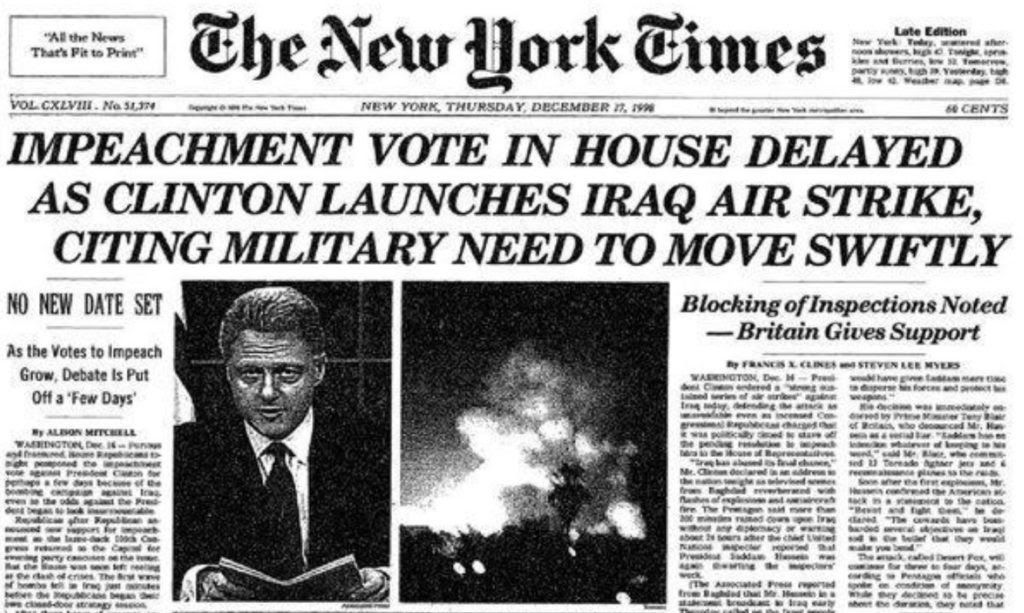 (now this interesting if you forgotten)
by Aaron Kesel
{ activistpost.com } ~ Thousands of people took to the streets across the U.S. today to protest against what has become known as “Trump’s War” on social media more commonly referred to as potentially the start of World War Three... This is amid claims that Northern Baghdad, Balad Airbase, has been struck by missile fire after explosions were also heard in Iraq’s Green Zone and that an Iranian base was also hit by shelling, suggesting the two events are potentially connected. Following the attacks, video posted by RT Spanish affiliate — ActualidadRT — show several helicopters flying across Baghdad’s skies. This follows a droning of Iran-backed Shi’ite militias near camp Taji north of Baghdad, less than 24 hours after another U.S. drone attack assassinated Iranian military leader, Qasem Soleimani. Zerohedge reported the incident, calling it “round two.” The attack is said to have killed six pro-Iran militia commanders and critically wounded three others according to an Iraqi army source. This recent attack on a U.S. airbase in Northern Iraq is likely retaliation by the Iraqi pro-Iran militia or Popular Mobilization Units (PMU), possibly even Iran themselves for the assassination of Soleimani. Al-Arabiya and other local news sources report rockets landed in the Green Zone in Baghdad, where the U.S. Embassy is stationed. Several witnesses told Reuters that explosions were heard in the capital of Iraq, Baghdad. Shortly after the rockets landed in the Green Zone of Baghdad, less than 1 mile from the U.S. embassy, another attack took place at Balad Airbase which stations U.S. troops. Reports suggested that multiple rockets have struck Balad Airbase, located just North of Baghdad, which hosts U.S. troops...   https://www.activistpost.com/2020/01/anti-war-protests-flood-u-s-st...
.

{ news.usni.org } ~ Amid rising tensions with Iran, the Navy is scrapping an exercise with Morocco as it redirects amphibious assault ship USS Bataan (LHD-5) and embarked 26th Marine Expeditionary Unit to the Middle East, a defense official confirmed to USNI News on Friday.

The Marines will join soldiers from the Fort Bragg, N.C.-based 82nd Airborne who have been sent to Iraq as a security measure following the U.S. operation that killed a top Iranian military leader on Thursday.

Qasem Soleimani was killed by a U.S. drone attack, according to the Department of Defense. Soleimani was the head of Iran’s Islamic Revolutionary Guard Corps – Quds Force, a U.S.-designated Foreign Terrorist Organization.

“Soleimani was actively developing plans to attack American diplomats and service members in Iraq and throughout the region,” according to a Pentagon statement.

The new deployments and the death Soleimani are part of a recent string of escalating interactions between Iran, Iranian-backed forces and the U.S. in Iraq and Syria.

On Tuesday, a mob including members of the Iranian-backed Kataib Hezbollah militia stormed the front gate of the U.S. Embassy compound in Baghdad. The mob was protesting recent U.S. military airstrikes on five Kataib Hezbollah sites in Iraq and Syria.

On New Year’s Day, the Pentagon sent about 750 members of the Army’s 82nd Airborne Division to Kuwait.

The Bataan Amphibious Ready Group had just arrived off the coast of Morocco this week before its new tasking, according to the USNI Fleet tracker. The ARG deployed quietly from the East Coast in December.
https://news.usni.org/2020/01/03/uss-bataan-marines-26th-meu-headin...

Its hard to believe we are in this but we can do alot better to control the issues and lead the way to freedom. I go along with your suggestions and strongly agree.

If the President wants to send a clear message to N. Korea and Iran that he will not be intimidated and that the US will remain committed to enforcing global peace thru strength... the President should place several select National Guard Air and Ground Combat units on alert... several Brigades and Air Force Squadrons at the ready, a display of reserve firepower and his committment to maintain the current balance of power in the region.  That should shake them up.

We should prepare to relieve the Iraqi government... they are capitulating too Iranian leadership.   Mahdi, the PM for Iraq needs to be advised that we will not let Iraq become a proxy state for Islamic Terrorists to operate out of... or for Iran to leverage in their bid for control of the Mid-East.

This is a serious matter and needs a firm hand to ensure that the Islamic leaders understand that the US is not going to capitulate.  Pres. Trump needs to know that the current political battle over Impeachment is being viewed as a window of opportunity to expand the Islamic and N. Korean causes.

Well, its hard to determine what we should do. I know that the southern border is important just as our troops being sent to the Middle East. But no matter what the president does he will be discredit by the dems.

i see why they are sending some troops but i would rather, personally, TROOPS TO OUR SOUTHERN BORDER AND END THAT THREAT.