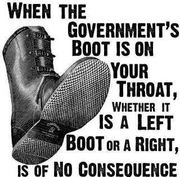 These boots are made for walking...

We hear boots on the ground and now we need them.  Time for these Patriot Boots to start walking all over the government for a change.  C'mon Patriot Boots, let's do some walking...

We will be watching this page daily to see what is being proposed.

Effecting change through children and education

You need to be a member of Patriot Boots to add comments!

I think one of the best ways to ensure a proper education is home-schooling.  My mom home-schooled both me and my sister, and after hearing all the things my public-schooled teammates have said about their school and experiencing a boy high on drugs at a high-school field, I'm glad my parents chose this path for my sister and I.

I agree that a proper education is the key.  I just don't know how we're going to do it.

Somehow we have to stop rewarding the progressives that are teaching our children while we get them properly educated.

If you haven't seen these links before, they are from an Russian agent that defected to the U.S.  He talks specificity about what needs to be done with the up coming generation.

Ralph, I believe you are correct - the left wing student robots like the SDS (Students for a Democratic Society) always try to interrupt a conservative speaker.  It is standard practice for the left, because they don't want the truth to get out.

But I meant that we "The Tea Party" need to "adopt a school, college, or university" [preferably one that has a student conservative group] and get them to bring more conservative speakers to the campuses.  They can't be everywhere at once.

And if the student conservative body speaks to the school administrators ahead of time before any conservative speakers arrive, we can hold the school accountable for keeping the lefty students under control and not allowing them to interrupt.

They don't want our message to get out, because they are afraid of what will happen if the truth gets out.  We need to push hard!

That is something that we all can engage in.  They did the same thing to us back in the 1960's... Let's give them a taste of their own medicine!!!

The only problem has been that the left gets their progressive student robots to stop those speakers from speaking or interferes with their talks.

It may be time to stop donating to these institutions and stop them from getting tax dollars and tax exemptions.

Here is my strategy:

Recruit College Students!!! There are colleges that have Conservative Groups!  Get them to start requesting conservative speakers to there campuses which will push our values on the administrators. Then they will realize that we aren't allowing our kids to be brainwashed by people like Bill Ayers!

Children are the future, but the left has been into them for a lot longer than us.  We need to get our kids back from the left!!!

The real beginning to the solution is in the two following video clips.

I will warn you.  It involves the nuts and bolts of American politics, so they're boring, but, short and absolutely right.

The last link is to the host site, which if we all go together and used in our political tool box, would make a world of difference.


The "True Business of the Precincts" Part 1

The "True Business of the Precincts" Part 2

Welcome to United Precincts of America!

Are you ready to accept the challenge and be American?

I have been to every act, Tea Party and JBS. So far none have any strategy other than complaining except the JBS. We are having a strategy meeting this Friday. We need action plans that has teeth. The church I go to is the same way. I have talked to some of the Tea Party leadership and they say no ones wants to take action.  Just a very small amount. These communist are not playing games. If they have they way we will all be in camps soon. What amazes me the Mormons and Jehovah witnesses will go door to door. But no one at the Tea Party will. Or ACT. Or Christians. None for there country.

What will you do for your country and familys future?

We are not doing enough. We should be attacking this problem. Attacking them the enemy. The Marxist.

I'll be more active here once i get moved into my new place . Have a place here in Austin,TX & Will be returning to New Mexico to rebuild my place there. Moving back and fourth is a real pain !

I understand your frustration, but, there are many people doing stuff.  The gun bill is shoved aside for now, it didn't do that because people did nothing.

They haven't signed the UN Small Arms treaty, that Obama is salivating over. because people are doing nothing.

In Florida, "True the Vote" is still working it's way through the Florida courts, trying to hold the vote cheaters accountable for the vote fraud that stole the election from Allen West.  Not to long ago they needed a lot of donations to proceed and they got what they needed because people donated.

They are still trying the remove Sheriff Joe Arpaio and they haven't yet, because, when he needed funds to defend himself people donated.

People are doing what they can, the question is, what are you doing.

President Obama owns the White house and The Senate.  We have some wimps in the Republican Party.

In 2014, we can take the Senate and keep the house, but, probably throwing out some of the RINOs may be as important, it will give the others the feeling that there is no place to hide.

Petitions are a pain in the butt, because it takes so many of them to get the bad guys to even hesitate.  But, so far petitions, have been effective in slowing them down.

How many have you signed?

Representatives need to be called, how many have you called?

True the Vote, Judicial Watch, Campaign for liberty, FreedomWorks and many other organizations could use some donations, as little as ten dollars.  How many have you donated to?

Wild Bill for America has suggested that, five or ten people in their local area, get together and do some protesting.

Lined up any people in your area yet?

Do complain about complaining, find something to do!

We must be doing something. Gun control got stopped. If we loose seats in 2014 and do not take the senate that may change. Now on to amnesty.