What Would You Be Willing To Do If The GOP Steals The Nomination?

The Tea Party Research Team predicted this! ...but what are you willing to do about it? Let the GOP get away with silencing the voice of the people?

“The media has created the perception that the voters choose the nomination. That’s the conflict here,” Curly Haugland, an unbound GOP delegate from North Dakota, told CNBC’s “ Squawk Box ” on Wednesday. He even questioned why primaries and caucuses are held.

Haugland is one of 112 Republican delegates who are not required to cast their support for any one candidate because their states and territories don’t hold primaries or caucuses.

Even with Trump ’s huge projected delegate haul in four state primaries Tuesday, the odds are increasing the billionaire businessman may not ultimately get the 1,237 delegates needed to claim the GOP nomination before the convention.

This could lead to a brokered convention, in which unbound delegates, like Haugland, could play a significant swing role on the first ballot to choose a nominee.

Most delegates bound by their state’s primary or caucus results are only committed on the first ballot. If subsequent ballots are needed, virtually all of the delegates can vote any way they want, said Gary Emineth, another unbound delegate from North Dakota.

“It could introduce Paul Ryan, Mitt Romney, or it could be the other candidates that have already been in the race and are now out of the race [such as] Mike Huckabee [or] Rick Santorum. All those people could eventually become candidates on the floor,” Emineth said.

House Speaker Paul Ryan , who decided not to run for the White House this year, said in a CNBC interview Tuesday he won’t categorically rule out accepting the GOP nomination if a deadlocked convention were to turn to him.

Democrats experienced the last true brokered presidential convention to go beyond the first ballot in 1952. Republicans came close at their 1976 convention.

“The rules haven’t kept up,” Haugland said. “The rules are still designed to have a political party choose its nominee at a convention. That’s just the way it is. I can’t help it. Don’t hate me because I love the rules.”

Haugland said he sent a letter to each campaign alerting them to a rule change he’s proposing, which would allow any candidate who earns at least one delegate during the nominating process to submit his or her name to be nominated at this summer’s convention.

If the GOP race continues at the same pace, Trump would likely have a plurality of delegates. So far, he’s more than halfway to the 1,237 magic number.

The real estate mogul dominated in Florida over Sen. Marco Rubio , who dropped out of the race after losing his home state.

“You have groups of people who are going to try to take over the rules committee,” he warned. “[That] could totally change everything, and mess things up with the delegates. And people across the country will be very frustrated.”

“It’s important that the Republican National Committee has transparency on what they’re doing [on the rules] going into the convention and what happens in the convention,” he continued. That’s because of “all the votes that have been cast in caucuses and primaries. Don’t disenfranchise those voters. Because at the end of the day, our goal is to beat Hillary Clinton or whoever their [Democratic] nominee is in November.”

Emineth said he’s worried that frustration would discourage Americans in the general election from voting Republican.

Dilbert Cartoonist Argues that Donald Trump is a Genius who will Win!
Dilbert cartoonist Scott Adams recently conducted a videocast on Persicope with his fans where the topic of most interest seemed to be – Donald Trump. For months,…
CONSTITUTION.COM 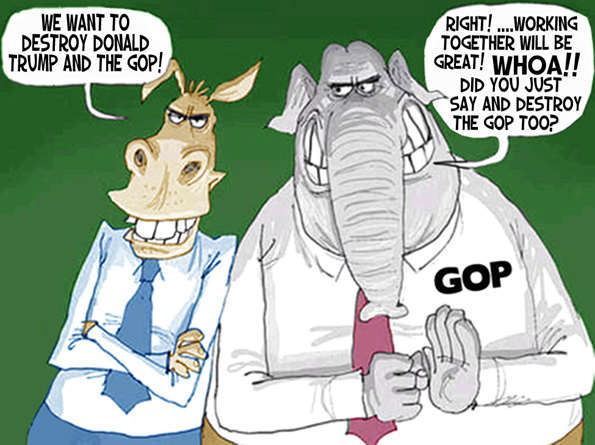 It appears you are posting material without going through the proper procedures to have your articles pre approved by the National Director Dee as required.

Therefore, please cease and desist from any further attempts to override the established protocols of this site.