What About Julia? A True Story. 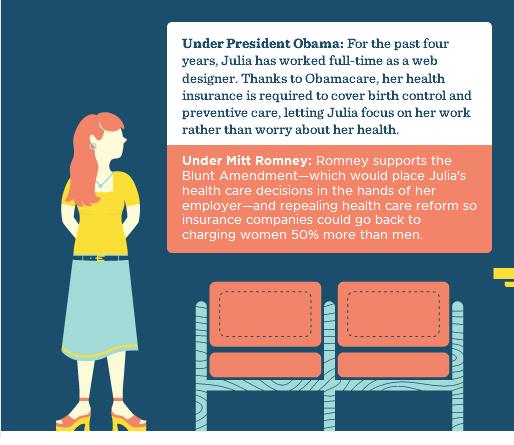 Daniel Bongino
What About Julia? A True Story.

I spent the past weekend celebrating my daughter Amelia's third birthday. One of the stops we made was in the local Build-A-Bear store to buy her a new teddy bear. While we were there we ran into a woman, let's call her "Julia", who worked in the day-care location where we used to send Amelia. It turns out that Julia works in the Build-A-Bear store, along with the ...day-care center, all the while holding down a third job to make ends meet.

Julia kept smiling the entire time we were in the Build-A-Bear, and I admired her for doing so, despite the obvious fatigue showing on her face. Watching a fatigued Julia work despite the fatigue reminded me that Julia lives in the real world, and in the real world, real policies have real implications for real people.
My interaction with Julia, who is a flesh-and-blood person living in the real world, makes me wonder what happened to the faux-Julia from the 2012 Obama campaign ad? Do you remember her? It was a campaign ad designed to highlight the government's involvement through the Obama policies, in the life of a fictitious woman named Julia.

But, what has President Obama really done to help the real Julias of the world; is it the "free" community college plan? The Julia I ran into in the Build-A-Bear already has access to student loans for college and, if President Obama was honest with her about the additional taxes which will be taken out of her three part-time paychecks to pay for "free" community college whether she attends community college or not, I'm not sure she would be so willing to take the deal. If President Obama was even more transparent and explained to her how excessive government involvement in the student-loan business has been a primary-driver of the elevated costs of a college education, she would probably be even less likely to look favorably upon the deal.

What about Obamacare; surely that helped Julia? It’s likely that Julia has to work three separate part-time jobs because Obamacare has incentivized companies to move positions from full to part-time. Obamacare's mandates, which redefine "full-time" work as a 30-hour work week has, as most government programs do, created a tidal wave of unintended consequences which birthed an incentive for companies to make the Julias of the world part-time and to reduce their hours to under 30 per week.

President Obama may talk a big game about young single-women and all of the beneficial policy prescriptions he has filled for them but his real legacy is frightening. President Obama had lorded over an economic recovery which ranks as the worst in modern times which, when combined with the devastation in middle-class incomes during the Obama years, has forced the Julias of America to trade a future of boundless opportunity for a present consisting of paycheck-to-paycheck survival. President Obama has also forced our Julias to trade a few dollars in savings on readily available contraceptives for hundreds of extra dollars per month in inflated healthcare premiums as a result of Obamacare red-tape and mandates.

The Julias of America, working those part-time jobs to stay above water as the waves come crashing in, have been celebrated by this President when it comes to his rhetoric, and abandoned by him when it comes to policy leadership. As Conservatives, we will always be at a tactical disadvantage to the far-left purveyors of that failed ideology because they insist on telling the American people about all of the “free” stuff they are going to “give away.” Being a Conservative means telling the American people the truth about the real costs of “free” government give-aways, both in terms of their tax-dollars and in terms of the damaging effects on the free market through the distorting effects of government third-party-payer models. These are never easy conversations to have but, if we lose elections on the right side of the truth, did we really lose?

As I watched “Julia” work to keep those kids happy in the Build-A-Bear store, despite the obvious exhaustion in her eyes, my frustration grew because I knew that it didn’t have to be this way. If we could just get more money in Julia’s pockets through tax cuts, if we could get Julia the healthcare freedom she needs to make her own cost and quality decisions with regard to her healthcare future and, if we could get the government anchor off of the backs of the small Build-A-Bear businesses that expend precious resources complying with their government masters in the regulatory, tax, and healthcare compliance front, then maybe the Julias of America could trade the look of exhaustion while working their third job of the week, for a look of satisfaction that a better tomorrow is right around the corner.
pulled from Daniel Bongino's Facebook page: https://www.facebook.com/dan.bongino/photos/a.517057181720381.10737...

Mark, you should not lump everyone in one basket. Ted Cruz; Trey Gowdy; Dr. Ben Carson; Sarah Palin; and many others took the heat from treasonous Liberal media for supporting honor and integrity! We need to realize one thing to the MAX, in that those who suggest honor and integrity are religious values and should be left out, it has become full corruption and we see this always in Liberal media!

i agree,
and no disrespect to the used car salesmen with honor, integrity, and religious values either.

The difference is the Used Car Salesman works for as Living.  He is not a parasite. He is taxed, he has to pay for Health Insurance for people who want abortions, have gotten themselves addicted to Drugs, and alcohol, for Fat People who have eaten themselves into Ill Health, for Maternity Care when he is not married, or too old to even have Children.    This Con Game to control our Lives has got to go, in it's entirety!!    All of it!!     Socialism is here, and we just have to make the momentous move to reject it, in all forms and fashions.    I owe nothing to people too lazy to work, forget it, I'm tired of carrying the indolent, slothful lazy parasites on my back.    You have no right to take 55% of what I saved for my Children.  Let's take Obama and his Criminal Band, and send them back to Hell!!!

Well, this article makes several good points. And if it weren't for the Bush crime cabal (BCC) which has overseen the theft of roughly $16-20 Trillion US Taxpayer dollars we would have plenty of money to fund projects and maybe "Julia" doesn't have to work 3 jobs and then we do not have to hear rhetoric about raising taxes...which is a not-so-polite word for mass theft. For their payback in shuttling Obama thru the system to his perch today they receive protection from the Obama crime organization aka administration.

What is really so sad about the Julia's of this country. Is that before the Obamacare monstrosity was past ? It was well known that over 70% of the country wanted NO part of it ! But the liberals (Hydra/NAZI's/Communists) rammed it through anyway. Then and after Nanna Piglosi told us "They had to pass it to see what's in it !" went back behind closed doors where they all SCREAMED "HAIL HYDRA !". I'm not being funny either my friends. We're up against FANATICS ! We can expect nothing but chaos, treachery and backstabbing from the left for decades now. It's well known they knew Barry Soetoro was not eligible to be POTUS !

We are living under tyranny in a dictatorship that we did not want or vote for.  It has been forced upon us against our will.  The question is:  Will we accept this or reject this tyranny by any means necessary to defeat it?

Julia should have realized after a short time that a government will never help you up  only take you down and force you to stay there.  This government has become against the people the tyranny is upsetting and should never happen.

Blaming Bush is getting old, get over it! As for this insidious asshole in the White House and his cohorts, they are pushing the Progressive Socialist Communism up America's collective ass. We know what's right but we don't have the Political power to correct it, let alone that 75% of the GOP are pushing the same Progressive Agenda.  What do we do?  Complain to our Rep's, bitch to each other on internet blogs, stockpile supplies to ride out a National Emergency?  What is our option in this, wait until the Russian Spetznatz are brought in to go door to door collecting our guns? We are sitting on a ticking time bomb and no one knows what to do. We don't have a leader, a plan, a training program, any form of organized resistance to a possible overthrow of the Government...."sit and wait, hope for the best".