The US- British- United Nation operated banking system hard at work.  Thousands of people in Sweden are implanting microchips into their skin in order to replace credit cards and cash. The disturbing new trend has grown over the last few years, with as many as 4,000 Swedes now implanted with the futuristic chips – which are about the size of a grain of rice.

Nypost.com reports: Like glorified smartwatches, the chips help Swedes monitor their health and even replace keycards to allow them to enter offices and buildings.

They have particularly caught on, however, by enabling owners to pay in stores with a simple swipe of the hand, a big deal in a forward-looking country that is moving toward eliminating cash.

The microchips were pioneered by former body piercer Jowan Österlund, who calls the technology a “moonshot” — and who told Fortune magazine that he’s been hit up by hopeful investors “on every continent except Antarctica.”

“Tech will move into the body,” the Biohax International founder told the mag. “I am sure of that.”

Österlund insists the technology is safe — but that has not stopped alarm bells from ringing, with some fearing a link to a doubling in cybercrime in the country over the last decade.

Libberton, a British scientist based in Sweden, praised the “definitely exciting” potential health benefits of accurate health metrics taken from inside the body.

But he also fears the mass of highly personalized data and how it could be used.

“The problem is, who owns this data?” he asked. “Do I get a letter from my insurance company saying premiums are going up before I know I’m ill? If I use the chip to buy lunch, go to the gym and go to work, will someone have all of this info about me? Is this stored and is it safe?”

Libberton added, “It’s not just about the chip, but integration with other systems and data sharing.”

And he fears Swedes are not giving enough thought to the potential dangers.

“People have shown they’re happy to give up privacy for convenience,” he said. “The chip is very convenient, so could we accept our data being shared very widely before we know the risks?”

The trend coincides with Sweden’s march toward going cashless, with notes and coins making up just 1 percent of Sweden’s economy. At the same time, the country has seen a dramatic decrease in some crimes — with just two bank robberies last year compared to 110 in 2008.

Don't be so hard on Mr. Nelson,  its all a conspiracy theory.

I Agree, no more to say about it.

Revelation 13:17 17so that they could not buy or sell unless they had the mark, which is the name of the beast or the number of its name.

I am against using Bio-Chips as a method to conduct economic action... for biblical reasons.  I see it as the mark of the Beast...

Well, told ya the bankers were up to no good. Like one flew over the co-co nest, they should of dropped in...:)

I knew about RFID Chip technology long ago... and have preached against taking any Chip implants.  It is common knowledge among Christians of the Pentecostal faith...

Shameful of Sweden!! This is Mark of the Beast!!

I want too wish you all a Happy Shabbat Shalom ( Peaceful Sabbath ) Everyone!! 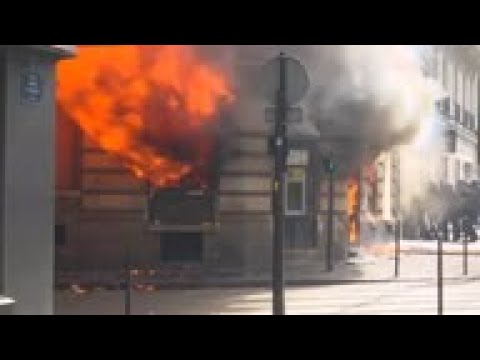