The Politics of Islamic Beheading 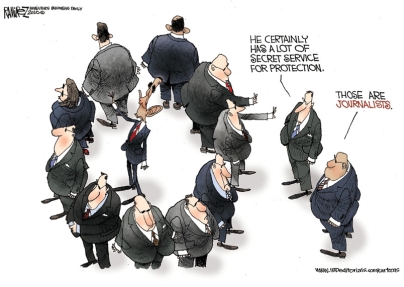 The videotaped beheading of a second American journalist Steven Sotloff by the Islamic State is titled Second Message to America. Scripted and filmed in the same manner as the videotaped beheading of James Foley both videos are primarily about disrespecting President Obama. The language, gestures and violence signified disrespect in the same manner as a gangbanger calling out a rival gang leader. The executioner in this latest video, who appears to be Jihad John from the first video, implements the philosophy of honor/shame cultures where ‘word is bond’.

Hence the Islamic State followed through on their threat and demonstrated that when they set a red line they mean it. If there were prizes for jihadist propaganda videos both of these would win academy awards in the category of recruitment. In the Sotloff video the executioner ratcheted up his in your face rhetoric stating,

“I’m back Obama, and I’m back because of your arrogant foreign policy towards the Islamic state, because of your insistence on continuing your bombings ……, despite our serious warnings. You Obama, have but to gain from your actions but another American citizen. So just as your missiles continue to strike out people, our knife will continue to strike the necks of your people.”

Referring to the President of the United States without title but simply as Obama symbolically strips him of the honor of that title and the position it represents. Pointing the knife at the camera while calling President Obama out is the kind of gesture that appeals to young men who respect strength and action, particularly if that action involves what is perceived as badass violence such as cutting off the head of your rival with a small knife as revenge for crossing your turf. This type of rebellious message attracts failed rappers and disaffected misfits who last year were wannabe gang bangers and this year are joining the Islamic State to become Mujahideen fighters.

The response to the James Foley video demonstrates how out of touch the main stream media is with global jihadist violence. The James Foley video prompted the ‘don’t share’ campaign to censor Islamic State propaganda on social media. This campaign was slightly effective in making it more difficult to view the Sotloff video. There should be no doubt that the campaign to remove the Foley beheading video was more about protecting President Obama, the primary subject of the film, than protecting the privacy of the family or reducing Islamic State propaganda.

Permalink Reply by Jonathon Joseph Parker on September 3, 2014 at 2:39pm

A "REAL" AMERICAN PRESIDENT, I DO MEAN A "REAL" AMERICAN PRESIDENT, NOT A KENYAN BORN ILLEGAL ALIEN MARXIST MUSLIM COMMUNIST ALLAH WORSHIPPING, SHARIA LAW FOLLOWING, MUSLIM BROTHERHOOD MEMBER, BUT A "REAL AMERICAN" PRESIDENT WOULD HAVE ALREADY BOMBED ISIS BACK TO THE STONE AGE AND DAMN THE CONSEQUENCES, BUT WHEN YOU HAVE A MUSLIM/COMMUNIST "WOULD BE DICTATOR" IN THE WHITE HOUSE ALL THAT IS GOING TO BE DONE IS THE FURTHER DESTRUCTION OF AMERICA!!

Chechnyan leader: Isis has no relation to Islam

Translation of an instagram from Ramzan Kaydyrov which was sent after ISIS made threats against Russia while sitting in two of the jets Russia supplied Syria with:

-- "Terrorists from Syria, who call themselves the "Islamic state", expressed a childish threat to go to war in Chechnya and the Caucasus. They say only what the secret services of the West tell them to. These bastards have no relation to Islam. They are outspoken enemies of Muslims around the world. These naive people decided to threaten Russia and Chechnya with two stolen planes made by Russia.

They can sit in two thousand aircraft, and none will reach Russia. All who are under the control of the United States, the country which has announced sanctions against Russia have achieved nothing, and these same unwashed criminals decided to distinguish themselves by taking on the role of the thug.

I state with full responsibility that anyone who has an idea to express a threat against Russia and name President Putin while doing so will be destroyed where he sits.

We will not wait until he sits behind the wheel of an aircraft. He will go to the place where his brothers rot along with terrorist Khattab, Abu Walid, and other messengers of the West.

I want to remind everyone who is planning something against our country, that Russia has worthy sons, ready to fulfill any order, and will wring the neck of any enemy in his own lair, wherever he may be. And we will be happy to rid the world of these scum. The militants in Syria and Iraq represent nothing, including themselves. They are bandits, trained and armed by the United States and the West to destroy with their own hands the strong and resource-rich Islamic countries.

They have no idea what the Quran and the Sunnah really means. I emphasize that they will end their days under the hot sun in Syria and Iraq, and in the first instant of death will meet their eternal flames of Hell." --

The next 911 probably set in stone

UPDATE: The list of planes "possibly" taken include models that can fly anywhere in the world. But nothing confirmed, only that they can "only hit Egypt" which means it is PATENT B.S.

So this is the plan? Since the "beheadings" suffered badly from poor special effects, now they are claiming that 11 commercial jets have been stolen from the Tripoli airport. Obvious B.S., and they are saying they can do Africa but not America. OK. fine. Please give us the tail numbers and if they cannot, they cannot also report the jets stolen. Theft means the aircraft is identified, and there is no way they could not possibly end up NOT IDENTIFIED. Any report that does not read like "Allahu Akbar Airlines lost a 737 with registration number __________ and a capacity of ________ and a range of _____________" is a load of crap, if 11 jets really did get stolen that info would be front and center. The fact it is not means FALSE FLAG WITH JETS THAT HAVE BEEN PARKED OUT AT THE MOJAVE BONEYARD FOR 10 YEARS ON SCHEDULE FOR SEP11 2014.

The CIA said that Obama is an islamist terrorist.  This statement was in the Aug 30th Exporer website and soon disappeared after it was hit too many times.  I couldn't even print it.  He has left the southern border open to  ALL people and terrorists.  He is out to be the dictator of the world.  Why is he in our White House?

Good Grief .. do you really think the world would let this fool take that position .. even his isis would have him beheaded

When we finally get rid of the left wing cowards in the DC may be this country will get some respect back. This whole Barry term in office has been one fiasco after another. From the magical apology tour to the please love him sonnets spewed out by the left wing media.

"Let them hate me so long as they fear me."

I would just change it this way.

Let them hate us as long as they fear us !

It's seems trying to get the world to love us has failed ! Take note Barry Soetoro anymore brilliant ideas MORON !!

Of course - Obama was bought and paid for by those that run the Mainstream Media -- ABC, CBS,NBC, CNN, HLN, FoxNews, Hollywood, Corporate America, Int'l Political Houses in Europe and the Middle East, etc.

Are these be-headings or "drama skits" being staged so you will send your sons and daughters to die in the Middle East for someone else's expansion plans? Think carefully...

Don’t believe anything you think!

Could this be a Psy-ops campaign on the American people?

Psychological Warfare (PSYWAR), or the basic aspects of modern psychological operations (PSYOP), have been known by many other names or terms, including Psy Ops, Political Warfare, “Hearts and Minds,” and propaganda.[1]

It is used to induce confessions or reinforce attitudes and behaviors favorable to the originator’s objectives, and are sometimes combined with black operations or false flag tactics. Target audiences can be governments,organizations, groups, and individuals.

Current events are moving very fast, from one crisis to another. “Order out of chaos”  is their motto. This video certainly raises many more questions.


" This society has not been willing to take some basic steps to keep guns out of the hands of...uh...of people who can..uh..can do unbelievable damage "

I wish someone would drug test him daily.

the narrator guy in the bottom video - great voice, great presentation...  wonder if he has a day gig?

I know, that guy cracked me up!

I don't know the technical aspects of Body Language, but it is clear even to a Novice that Obama is lying..... Disrespect?  There is nothing about SOBARKA to respect, and jihad john was correct in NOT addressing the fraud as "president", because he is NOT.