So Ismaaiyl Brinsley the killer of the two cops in Brooklyn, NY, has two Muslim names “Ismaaiyl” and a middle name “Abdullah” (see mugshot bellow) which means “servant of Allah,” is a fan of sheikh Yusuf Estes, who is not only neck deep in the Muslim Da’wa movement (the call to convert westerners to Islam) but Estes meets with both ISIS and Hamas financiers, and Brinsley loved the Koran, specifically Surah 8 on his own Facebook page, which calls for arming for preparation for Jihad war; it says all on what we need for motive as to why Brinsley shot the two officers. That accompanied with Hamas supporters who were proven to have been behind the riots in Ferguson is a complete recipe for killing cops as we present the evidence in this article.

Brinsley is a jihad sympathizer who used the racial turmoil as an excuse to kill Americans. The Ferguson riots as we shall see here were pushed and organized by Muslim fundamentalists in America.

Firstly, the verse he likes to read is:

Against them make ready your strength to the utmost of your power, including steeds of war, tostrike terror into (the hearts of) the enemies, of Allah and your enemies, and others besides, whom ye may not know, but whom Allah doth know. Whatever ye shall spend in the cause of Allah, shall be repaid unto you, and ye shall not be treated unjustly.

There are more photos in Qatar here of Estes’s mass activities in the Da’wa, but the most alarming is the one we discovered from Arabic sources is the photo meeting with Raed Salah and Nabil El Awadi is extremely troubling. Salah is one of the most virulent Hamas supporters who was jailed for financing Hamas. Prominent Islamic cleric Dr Nabil al-Awadi (with the red scarf) is president of the Kuwait Scholars’ Union, which has reportedly channelled tens of millions of dollars to the Islamic State (ISIS) and other jihadi groups in Iraq and Syria.

Salah predicted that “Zionism would end in Turkey.” Both Estes, El Awadi and Salah are in the Da’wamovement.

“THE ISLAMIC Movement’s da’wa system and its principles are completely identical to that of Hamas, and derive from the Muslim Brotherhood,” Reuven Paz, director of the Project for the Research of Islamist Movements at the Gloria Center, based at the IDC, said. Anyone can google  Yusuf Estes in Arabic “يوسف إستس” and spend months looking at his activities and connections to Islamists.

Brinsley took advantage of the Ferguson controversy, and is using it as a pretext to carry out Jihad. Its the type of thing Shoebat.com has been warning about, since we exposed the ISIS Manifesto in September which calls for Muslims in the US and abroad to kill Americans. (CLICK HERE TO READ THE MANIFESTO) Even an armed cop is not safe and we have been warning about this prior to the events in which Americans were killed. We expect more Americans will be killed not just on the home front but internationally as we had incidents in Saudi Arabia and the United Arab Emirates all confirmed to be linked to ISIS sympathizers.

Permalink Reply by Sonia Jones on December 21, 2014 at 8:57am
Col. Nelson, The states lost power and the power structure shifted with the passage of the 16th amendment (Federal income tax). Repeal of that Amendment would fix every single problem we have! Think about it!

For the first 136 years of this Republic, the Federal government had no Constitutional power to tax citizens individually. It took an amendment to give Washington ALL power and destroy the 10th amendment and state sovereignty. This happened in 1913. Interesting that the very same year the Federal Reserve Act was passed, giving private banks control of our money.

And no politician will go up against this because it disempowers them and the all who have fought banks in the past (Kennedy, Lincoln, etc) end up dead.

The US Senate once served at the will of their State governments and if they stepped out of line they could be recalled by the State Legislature.  That gave the State's great power over the Federal Government.

With a completely new fed gov of We the People initiate by Article V COS, all those issues mentioned would be corrected

Find a Chapter of the Organization named ACT.  Go to: atlashrugged.com      This is an organization that informs people regarding Muslims, and their plans for us.      Quite enlightening, also keeps tabs on them.     Very interesting, and desperately needed, as in some areas, they know nothing of this threat.     Think it is something far, far away, it isn't.  It is like smoke curling under a door.  An insidious Evil invading us.

YOU are so right, my fellow American. The soon we understand that the better off we will be.

Permalink Reply by Odessa taft on December 21, 2014 at 8:01am
This is exactly what Obama and company want. Dead Americans. 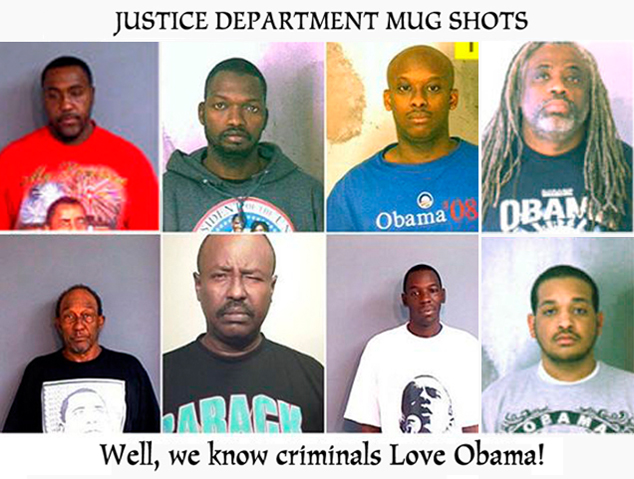 Which federal office did you say they were
candidates for ?????

Oh Yeah and all of them are for more Gun Control and confacation real solid americans NOT!!

Is there anything similar in these photos?     Would it be racist to notice they are all Black?   Seems to me simply an observation.      Let the blame lie where it falls!!     Let all Lawbreakers be imprisoned for their deeds.      Swift & Just Action taken.       As it is, do these Scum respect the Law?     Hell no, why should they?      Until we bolster up our Justice System, and demand Long and Serious Jail Terms for these animals, they will run amok, creating Chaos in our Society   . Let's begin by demanding Impeachment of the Instigator!!!!

My advise is, Shoot first and question the muslims later. They don't deserve any respect they are lower in the food chain than rats!