Operations, against Vimeo.com censorship, the fact or condition of functioning or being active. To never give up, to never surrender until death do us part.

Vimeo: Censorship Against Conservatives and Christians- TTTG News on YouTube

You may want to apply the blood of the Lamb of God to the doorposts and lintels of your heart... that, the angel of death may pass you by.

Unlike, in the days of Moses, when physical sacrifices were demanded, our salvation is spiritual... not of the things of the flesh.

One way or another they will die, I hold faith, that the writings spoken by Rabbis from the Book of Life.

Wam Bam, finally, this site, TPCC, and the video, Vimeo: Censorship Against Conservatives and Christians- TTTG News, is seen....:) 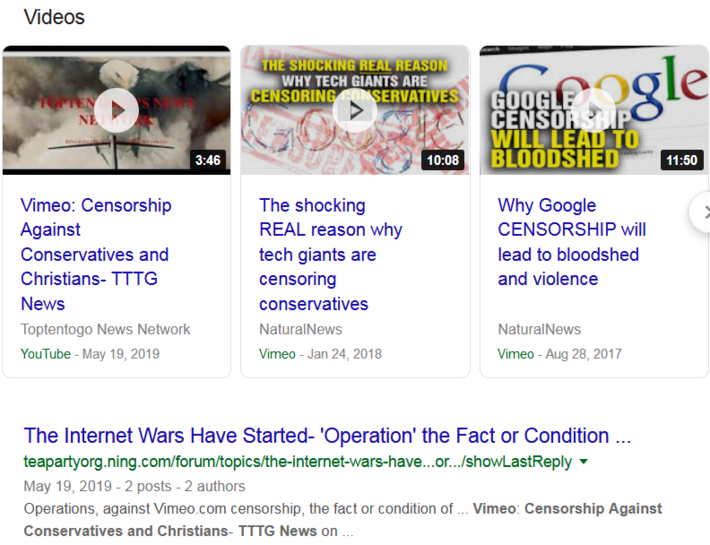 Why post the above items with LINKS that are absolutely worthless? Clicking on your links leads to a dead end jpeg... not VIMEO.

How about providing working links to these video's... Until we see TTTG News operating on Vimeo's net, there is no proof that your war on the internet is working...  just more stealth news.

If I may ask Mr. Nelson?

After reading a lot of your comments, slamming everyone, and at least 5 different occasions you asked to see the uploads by members of TTTG Networking, at vimeo.

Why must that information be shared with you?

I have personally viewed two uploads by the CEO for TTTG. All you need to know is that we are there, more then one of us.

The uploads at Vimeo, if any... don't have to be shared with me or anyone else. However, when one makes the claim they are engaged in an Internet War and asserts they have a formidable team, group or organization, penetrating the New World Order's, hold on the Internet...  They can expect to be CHALLENGED on that representation... or to be exposed as purveyors of hyperbola and propaganda.

In addition, much of what Hank and others have posted here is inaccurate, inflammatory and often anti-semitic. Such content needs to be challenged every time it is posted.

Finally, what I know is that some very wild conspiracy claims are made by TTTG and its members... with little real evidence to support them.  I also, find a heavy anti-semitic bias in much of what the group posts... Therefore, expect to be challenged in the future with regard to this groups content and biases.

that is great news Mr. Nelson,

And yes it is our world not yours.

Your world is in chaos and continues to deal with radical, usupported conspiracy theories ... leading to no where.  Try functionaing in a rational state of mind and maybe some of what your TRIBE printes may actually be accepted and acted upon.... until then, most of what you post is wasted effort and time.

I am in at vimeo, with one of my friends.

The statement of, "The Internet Wars Have Started- 'Operation' the Fact or Condition of Functioning or Being Active"

This has two sides, one is their activity, their internet wars. To assume, that they will stand down with their censorship, lacks insight. I have noticed when it comes to this site being attacked, there is no support in comments and little or no views. I know the emails were sent out, I understand why members of this site do not come to the aid of the TPCC. To put it simple, they do not have the internet technology to fight back.

I do not find it offensive for those who wish to disrespect TTTG Networking. I have better things to do other then engage such comments.

I have a video, where people tied a rope around the neck of of a white woman, maybe she was Jewish? they as they dragged her across, ripping her dress off, and raped her, then they murdered her. They are posting their crimes on they net.

In further, video footage, they tied a rope around a white child's feet, I could not tell if the child was a girl or a boy, because of the blood. They swung this child around and around then slammed the baby on the ground. They were African and Muslims.

Our Goals Mr. Nelson, is to reactivate all 1236 members. And bringing back on line our supporters.

I am troubled over certain videos and books. for hours, I sit and watch, I have read the books presented by Rosie. I will read them again, all of them one more time.

If we as Americans, stand silent, and allow such crimes against humanity and history to go unchallenged, then we show no respect of whom we are.

At this time, like you said, Mr. Nelson, Often I Sit Silence, I remember your blog, look over it again, and ask yourself, is Tif and Hank really your enemy?

Such criminal acts, as recounted by Henry above, are unforgiveable... However, they are the exception in America.... The world is full of such ciminal conduct, and has been for years... well before our life time... and it is likely only to become worse.

What do we do about acts of violence, against White men and women, in other parts of the world... We protest, educate and inform, with the hope that our govenment will do what it can to stop such crimes.  However, short of war, most of the Islamic States in the world are beyond our help and eventually America, as a Nation, will have to either destroy Islam's ability to wage such calamity upon the human race, or submit to their violence.  I perfer and hope that America will take whatever action is neecessary to stop ISLAM... up to and including massive military retaliation for their crimnal conduct.

We will have to see what America's leadership does... and if they fail to act... the People must find the where with all to replace them, with those who will act... Those who will take the appropriate military action to defend America and the Caucasion Race.