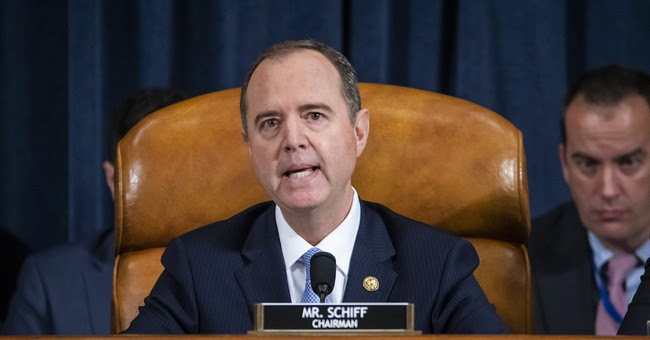 { townhall.com } ~ You know what doesn't pass the smell test in the Democrats' sham impeachment crusade? Their main beef is that President Donald Trump abused his power to interfere with a presidential election 2020, yet that's all they have been doing for the last three years.

Interference with a presidential election 2016 was also their allegation with the Russia-collusion hoax. Oh, my, how they revere the integrity of the election process.

Remember Rep. scumbag/liar-Schiff's endless guarantees that he had irrefutable evidence of Trump's collusion with Russia?

Well, even the Democrats' would-be savior, former special counsel Robert Mueller, and his team of Trump-hating attorneys, couldn't produce a scintilla of evidence implicating Trump. If scumbag/liar-Schiff had the goods on Trump, he would have turned them over to Mueller. But nothing came of it, which means that scumbag/liar-Schiff didn't just make an honest mistake or, in his emotional zeal, overstate his case.

No, he outright lied. And this isn't a minor fib about a small matter but a major lie about a gravely serious matter. Savor the irony: scumbag/liar-Schiff brazenly fabricated a tale about having concrete evidence that Trump interfered with an election so that he himself could spearhead the mother of all election-interference capers: undoing Trump's 2016 election and preventing his 2020 reelection.

Has scumbag/liar-Schiff been held to account for his lies? To the contrary, he's been rewarded by his co-conspiratorial party with leadership of the latest election interference scheme. Interestingly, this charade began with a so-called whistleblower, who was probably not a whistleblower at all but a Democratic plant in the bowels of the Trump administration as part of another "insurance policy" to undermine the man who was duly elected under our constitutionally prescribed method for electing presidents.

For all the preening about the integrity of the democratic process from a party that routinely undermines the Constitution and our national sovereignty through judicial activism, lawless executive orders, the administrative state and its open borders policy, couldn't the Democrats even pretend to treat presidential impeachment as mildly serious?

No, because their concern isn't election interference or respect for the Constitution but regaining power and advancing their leftist agenda at all costs. If they were so dedicated to our democracy, they'd quit exploiting the impeachment clause to reverse the results of an election. They'd stop saying, along with other cynics, that "treason, bribery, or other high crimes and misdemeanors" has no meaning apart from how the House chooses to define it.

Wrong. The framers chose all of their constitutional language carefully, and this was no exception. These terms had meaning under English common law and American jurisprudence. It's one thing to say that because the House has the authority to impeach, the constitutionally specified grounds for impeachment are irrelevant or the House has no duty to honor the Constitution. These elected leaders are ultimately accountable to the people, and if they abuse their authority to impeach a president, because they hate him or have policy disagreements with him, then they should be held to account.

One said they must impeach him so he doesn't get reelected. Another boasted that they are going to "impeach the mother-----." When the Russia-collusion hoax didn't work, they instantly pivoted to Ukraine. Why not? To them, impeachment is as easy as a grand jury indicting a ham sandwich.

Presidential impeachment is an extraordinary remedy and should be used sparingly for egregious and certain misconduct, not as a weapon used by a single party to disenfranchise voters -- especially when the people will be able to decide the matter for themselves with another election within months of the completion of this bogus process.

Precisely because of the gravity of the procedure, great care should be taken to ensure fairness. They should at least follow accepted evidentiary rules and accord Trump a level of due process provided to an alleged petty thief.

Against Trump, the process began in the basement and has now come upstairs with a one-sided kangaroo proceeding conducted by the Trump-loathing scumbag/liar-Adam Schiff, who is acting both as prosecutor and judge, even interrupting the Republicans' cross-examination in mid-question to coach a witness on his answer.

Everyone has already noted that the Democrats' case is based on hearsay. But that's not their only assault on justice and fairness. They claim Trump withheld aid to Ukraine in exchange for dirt on one of his likely 2020 rivals, loose lips liar-Joe Biden. But the facts including the statements of the Ukrainian president and the delivery of the aid despite no investigation of loose lips liar-Biden indicate the promise of aid wasn't conditioned on an investigation, and so, the case for a quid pro quo is weak. Equally important, they have no idea what Trump's motive was. If we are to have any respect for our election process, they must produce some evidence of Trump's criminal intent beyond wishful thinking -- especially when they are alleging bribery, a specific intent crime.

Trump was likely more concerned about uncovering Ukraine's possible complicity in the 2016 election and why the loose lips liar-Bidens weren't investigated than in exposing loose lips liar-Biden's corruption to undermine his 2020 presidential bid. The point is we don't know and won't know, and yet, they're going to impeach Trump anyway, imputing a motive to him they can't possibly divine. The Democrats have been salivating over a plausible opportunity to impeach Trump since before he took office, so why quibble over a little hearsay and imputed motives?

People say that the thrust of this impeachment farce is a policy difference between the deep state and President Trump. To be sure, this is a factor, but the main thing is that the Democratic establishment, the leftist media and the entrenched bureaucrats cannot stomach Trump occupying the highest office in the land. They despise him and have contempt for the tens of millions of voters who elected him, and the last thing they want to do is to give Trump and his deplorables a chance to do it again.

I don't drink, eat pizza rarely and don't watch NFL football anymore... too many political and overpaid primadonnas on the teams.

I do not believe ya, your neighbor said you have NFL pizza beer parties all the time...:)

But you got to stop getting drunk and wearing nothing but a lamp shared and stained underwear...:) Its freaking out the neighbor....:)

Sorry to disappoint you but I don't party with my neighbor... he is a liberal and we simply don't get along.  However, I do like barbeques and will try to make one of your BANKING barbeques ... just to show you I can be supportive even when I don't necessarily agree with the chief's ideas on what is for dinner.

Republicans didn't have any control not even in the House or the Senate. And no matter what they dislike they couldn't act.

The US Senate is firmly in control of the GOP.  The Administration is GOP... 2/3rds of the Government is GOP.  What do you mean the Repbulicans are not in control. They certainly are... in name.

However, the GOP is no longer the Republican Party of my father or my own generation... I would add that Trump has the full power to enforce the laws of the United States... however, he will not use it... preferring to retain some modicum of peace in the GOP ... and to avoid conviction upon Impeachment. I believe he is being coerced into accepting the corruption in DC.

Look we have lost America... it is over. Trump is merely a stay of execution... and not a very good one at that.  The DOJ, FBI, State Department, IRS and Intel services are all weaponized against our heritage... short of Trump actually enforcing the laws by declaring martial law and rounding up the criminals running our government ... we are on our way to our own hanging.

The actual governing of America is not improving... local governments are deteriorating, the federal government remains out of control, regulation may have improved but the average man and woman are not finding much in the way of improved regulatory relief... and by the way that irs tax relief... not for me... I paid more in income taxes each year since Trump took office and my insurance premiums and deductibles for tri-care and medicare have gone up not down.

I support Pres. Trump, voted for him and probably will again... however, I am not happy with his performance in draining the swamp... he has not put a dent in it... not one major Dem is in jail and many GOP members are... I am upset over that and I believe any fair person would be... Trump gets an F for law enforcement... The Swamp is growing not shrinking.

America is being held hostage by a criminal cabal... that has control of our legal system.  We are in Constitutional Crisis and the President is the only one capable of dealing with it.  The President needs to inform the people and offer a plan to reinstate law and order... it will take martial law.

It is up to the President to remove those agents in the FBI and DOJ providing such cover, and if he fears doing so, he needs to tell the American People about it, and then RESIGN. Or, he needs to declare Martial Law and go after the corruption in the DOJ, FBI and our Judicial system.

The President can use the US Marshalls and Military... too, remove those criminal agents, in the government, protecting the scum we all know about and want to be prosecuted.

Your not going to get the Government to move until they get moved, like taking a laxative...:)

Gosh I am so ready to post that blog, just waiting for the order to be given...:)

You know what happens when that laxative is finally dropped, don't you?  The Shi* hits the fan... and like all things evil ... rolls downhill ... into guess who?