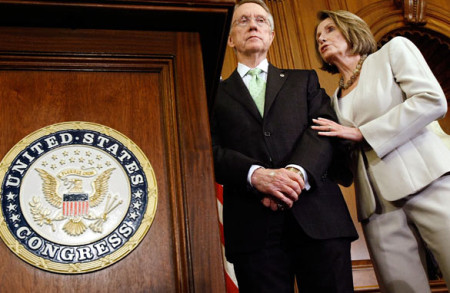 There are really two Democratic parties.

One is the old corrupt party of thieves and crooks. Its politicians, black and white, are the products of political machines. They believe in absolutely nothing. They can go from being Dixiecrats to crying racism, from running on family values to pushing gay marriage and the War on Women.

They will say absolutely anything to get elected.

Cunning, but not bright, they are able campaigners. Reformers underestimate them at their own peril because they are determined to win at all costs.

The other Democratic Party is progressive. Its members are radical leftists working within the system. They are natural technocrats and their agendas are full of big projects. They function as community organizers, radicalizing and transforming neighborhoods, cities, states and even the country.

They want to win, but it’s a subset of their bigger agenda. Their goal is to transform the country. If they can do that by winning elections, they’ll win them. But if they can’t, they’ll still follow their agenda.

Sometimes the two Democratic parties blend together really well. Bill Clinton combined the good ol’ boy corruption and radical leftist politics of both parties into one package. The secret to his success was that he understood that most Democrats, voters or politicians, didn’t care about his politics, they wanted more practical things. He made sure that his leftist radicalism played second fiddle to their corruption.

Bill Clinton convinced old Dems that he was their man first. Obama stopped pretending to be anything but a hard core progressive.

Reid is blaming Obama. The White House is blaming Reid. This isn’t just a showdown between two arrogant men. It’s a battle between two ideas of what the Democratic Party should be.

If you go to exchange them you will get a bag of manure.

We have the opportunity to pour gasoline on that fire!  There are a number of Democrats whose constituents are part of the electorate that do not like what Obama is doing.  We MUST force them to either support our positions or commit suicide.

We saw Democrats chose attempting to keep their cushy jobs rather than visibly support Obama or have Obama visible support them.  The Democrats that will have to run in 2016 should be exposed for who they are!

Bring out the jugs of gasoline!

The country could so do well without the Democrats. 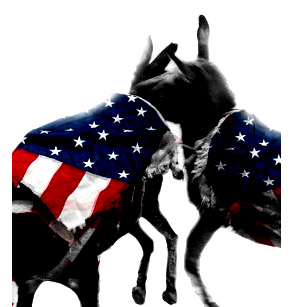 Reid is blaming Obama. The White House is blaming Reid. This isn’t just a showdown between two arrogant men. It’s a battle between two ideas of what the Democratic Party should be.

Senate Dems chose to back away from Obama to appeal to Middle America. Obama wanted to double down on his 2012 strategy of energizing the base at the expense of moderate voters. Reid and his gang are complaining that Obama didn’t back away far enough from them. Instead he reminded voters in the final stretch that the senators were there to pass his agenda. Obama’s people are dismissing them as cowards for not taking him to battleground states and running on positions even further to the left.

Reid’s people think that Obama deliberately tied them to him and that’s probably true. It’s not just about Obama’s ego. His campaigns and his time in office were meant to showcase the progressive position that the only way to win was from the left. Obama and his people would rather radicalize the Democratic Party and lose, than moderate their positions and stand a chance of winning.

The left isn’t interested in being a political flirtation. It nukes any attempt at centrism to send the message that its allies will not be allowed any other alternative except to live or die by its agenda.

Obama deliberately sabotaged Reid’s campaign plans, as Reid’s chief of staff discussed, because that strategy involved disavowing Obama and his legacy. In the time honored tradition of the radical left, Obama would rather have a Republican senate than a Democratic senate won by going to the center.

Republicans benefited from a Democratic civil war. They were running a traditional campaign against a more traditional part of the Democratic Party. They didn’t really beat the left. They beat the old Dems.

The old Dems were crippled by the progressive agenda. They were pretending to be moderates while ObamaCare, illegal alien amnesty and gay marriage were looking over their shoulders. They married Obama and it was too late for them to get a divorce. And it doesn’t look any better down the road.

The Clintons became the public face of the Democrats, but instead of turning things around, they presided over a series of defeats. Bill Clinton couldn’t even save Mark Pryor in Arkansas. Not only that, he had to watch Republicans take every congressional seat in Arkansas and the governor’s mansion.

Bill had wanted Hillary to play Sarah Palin, turning her into a kingmaker and building on a narrative of female empowerment by having her back female senators. Instead Kay Hagan, Michelle Nunn, Alison Lundergan Grimes and Amanda Curtis lost. Not only did Hillary Clinton fail to deliver, but the War on Women narrative was turned inside out by the rise of Joni Ernst.

Ernst’s emergence as the definitive new senator of the election killed any chance that Democrats had of spinning the election results as sexist; even if Harkin’s Taylor Swift crack hadn’t done that on its own.

The Dems had gambled that the War on Women could offset Obama’s unpopularity, but voters were more concerned about the economy than the culture war. Not only novelty candidates like Wendy Davis, but incumbents like Mark Udall, tried for what they thought was a winning strategy. But the War on Women wasn’t a strategy, it was a fake talking point that their own consultants had forgotten to tell them was disinformation that they had created to seed the media and spread fear among Republicans.

Romney had won white women in every age group. Increased turnout by minority women had skewed the numbers, but those numbers reflected racial solidarity, not a gender gap. Progressives had not bothered to tell their old Dem cousins what they were doing. The Senate Dems marched into political oblivion by adopting the Wendy Davis platform to the bafflement and ridicule of female voters.

The War on Women meme was greeted with laughter in New York and Colorado. Senator Udall was dubbed Mark Uterus by his own supporters and performed worse with female voters than in 2008. Meanwhile in Iowa, Joni Ernst had split the female vote which Harkin had won by 64 percent in 2008.

Not only did Hillary Clinton do more damage to her brand by failing to deliver white and women voters, but the Democratic Party is stunned, confused and divided. And the damage is self-inflicted.

The Clintons thought that they could reunite a splintering Democratic Party by taking on a Republican midterm election wave. Obama sabotaged Reid to keep the Democratic Party leaning to the left. Reid is now attacking Obama openly in a way that would have been inconceivable a year ago. Obama’s people are returning the favor by going after Reid and Schumer. The war of the two parties has begun.

And waiting in the wings is the 2016 election.

Obama has made it clear that he is willing to nuke his own party to get amnesty done. But for the first time his party seems less than eager to sacrifice its short term greed for the agendas of the left. And the only man who could tie the two wings together has emerged weakened from the Battle of Arkansas.

Amnesty promises radical demographic change, but red state Dems want to protect their positions today. They aren’t doing it for the ideology. They want to stay in office. The mutual backstabbing ended in disaster for the Democrats and there’s no reason to think that the backstabbing is going to stop.

GOOD !! That party deserves to go down in flames. Thanks John.

I think that there is only one kind of a demonRAT and they are all evil.

Their history and conduct definitely proves that. Just watch the 1 hr + post-election speech by Obama.

So, I guess I could say that the sodomite demonRATS are upset with the Marxists demonRATS.  They all are going to HELL.