Ted Cruz gets specific on 'abolishing the IRS' 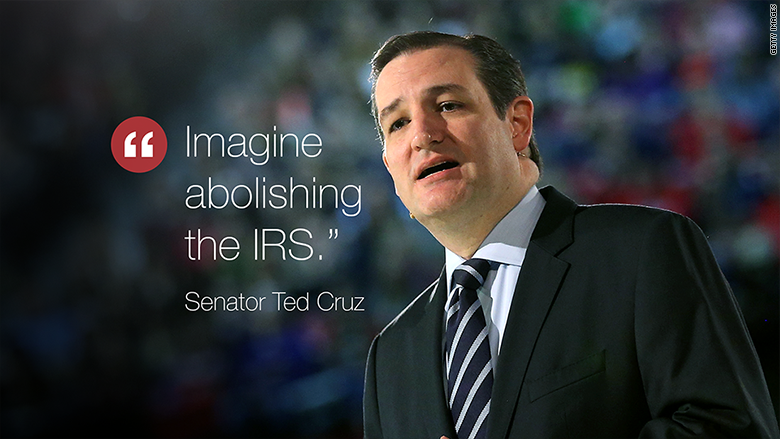 Sen. Ted Cruz has been gunning to abolish the Internal Revenue Service since coming to Washington two years ago.

To critics of the Texas Republican in Democratic and GOP circles, it sounds like bluster. The fiery rhetoric garners hearty applause from conservative audiences, particularly since revelations in 2013 that the IRS targeted Tea Party groups for extra scrutiny. But some federal agency is going to have to collect taxes, so Cruz's vow to shutter the IRS smacks of a politically motivated campaign promise rather than serious policy — at least to some.

In an interview with the Washington Examiner on Friday, the 2016 presidential candidate began to put some meat on the bones. Cruz, 44, explained how "abolishing the IRS" fits into his proposal, still being crafted by his team of economic advisors, for wholesale tax reform. This proposal, which Cruz plans to unveil later this year, is a key plank in his domestic agenda for economic growth that he would pursue as president.

"When it comes to jobs and growth and opportunity, the two most effective levers that the federal government has to facilitate small businesses creating new jobs, are tax reform and regulatory reform," Cruz said late last week, during a 20-minute discussion while on a brief swing through Las Vegas. "I am campaigning on a flat tax that would allow every American to fill out his or her taxes on a post card that allow us to abolish the IRS."

Cruz said he envisions shifting the tracking and collection of federal taxes to "some much smaller division" of the Treasury Department. The senator said that replacing the current, complex tax code with a simple flat tax would eliminate most of the work the IRS needs to do, making the agency obsolete and "irrelevant."

In its purest form, a "flat tax" treats all taxpayers equally. Income is taxed at the same rate regardless of earnings or wealth, while allowing for no tax deductions or exemptions. But Cruz said his flat tax proposal might allow some deductions, possibly for popular write-offs like for charitable donations and mortgage interest charged on a primary residence, paid annually by homeowners.

This makes sense if only because there are millions of illegals who work for "under the table" wages and do not pay a cent in taxes while milking the government for every service and dole they are able to get.

No flat tax, we need a VAT Tax. You buy something you pay a federal sales tax except on food. This will hit the people that get paid off the books Illegals etc.

Yes to this.  I would love to see the IRS be gone.

Frank, you just described the Fair Tax. The Fair Tax is a consumption tax, a sales tax. There is a sales tax already in place, so going to The Fair Tax would be quick and simple. Go to www.Fairtax.org to read about it

Ted Cruz is awesome and has my vote. He is very wise as well. In one of his "speeches" he talks about being in favor of the Fair Tax. Yet goes on  to say it will never pass. However, he believes a Flat Tax will. He went on to explain that this is a starting  point to getting a Fair Tax! One step at a time.

It would pass if more people were aware of it. Too many people don't understand what the Fair Tax is. I didn't understand it until I went to FairTax.org and read everything on that site about it. Since then I've become a huge supporter of it.

I like that he is polling such as idea out in the open and hopefully believes it. Now if he could get behind the Convention of States effort to do the same thing I'll know he is serious. Getting behind and driving that kind of effort will force Congress and Senate to be behind doing away with the IRS. Because just floating the idea and going to the Congress and Senate with it after the election will get absolutely no where - even with the bully pulpit. With incumbent control, they have every incentive to keep the status quo while using every excuse in the book to keep it that way to stay in office.

Why not just Tax everyone something, and hey, let's Tax Welfare, they Tax my Social Security!!!    If everybody paid then it wouldn't leave the working people to foot the whole Bill.

While we are at it. Lets abolish the rest of the useless departments in the government as well and have a balanced budget. We don't need a department of Home Land Security, A Department of Education, HUD, TSA, NSA, the federal reserve,a department of Health,Education, Welfare, the NTSB. just look at the billions of dollars saved with just these. And I am willing to bet the some of you out there know of more useless department or agencies of the Federal Government that are a waste of money. Our money.....

Yes, and when you get through abolishing them, then consider Foreign Aid, NOT!!!   No more, help in an Emergency like Nepal, yes.     Obama was so generous he sent them one million dollars, whoopee!!  The last of the Big Spenders!      Sandra Bullock sent one millon of her own money to New Orleans, without batting an eye, the first day of Katrina.        India must be a Friend, as we only really support our Enemies now, it seems.  Take the money we send to The Middle East, and send it to India instead.    I'm sick of my money going to people who hate us.