Legislation by British Canada Parliament Passed, Sharia Law. Taḥarrush is also a part of their culture. The Muslim Rape Game, will be silenced by the UN Agreement with Canada. White Genocide, may never be known. 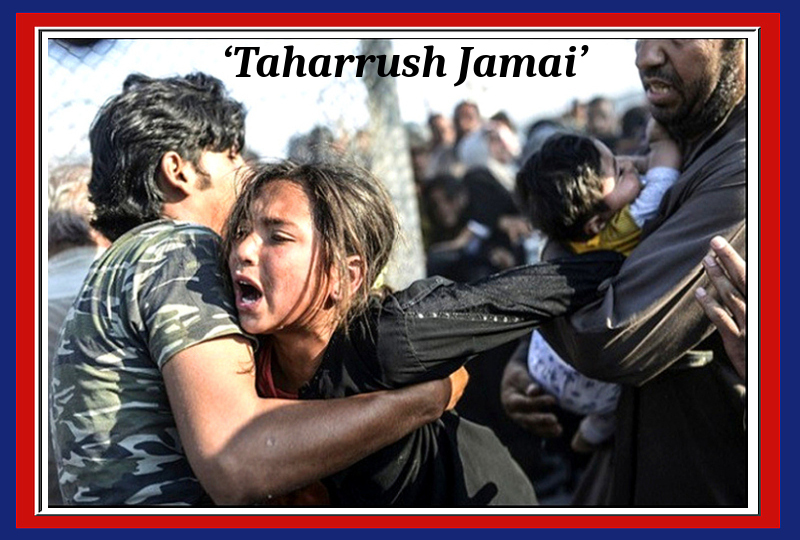 Back in 2016 the videos still were uploaded no matter if they liked it or not.

Leftist elites in Canada have launched a campaign to normalize Sharia law – the illiberal and often barbaric set of laws enforced in Islamic dictatorships.

In Ottawa, the Trudeau government is in the middle of what feels like a show-trial designed to make “Islamophobia” illegal – a term the government itself has failed to define.

After the controversial M-103 was passed in Parliament, leftist media and the Trudeau government insisted that the critics were wrong, that it’s just a motion – symbolic! – and that M-103 will have no legislative impact.

When the Heritage Committee began its hearings last week, however, critics who expressed concern over the motion were proven right.

One of the first experts to testify implied police should prosecute Canadians over social media posts that police deem offensive or incorrect. Yes, prosecute.

Orwell would be rolling in his grave.

In the background of this charade, the mainstream media joined in and is doing its part to support Trudeau’s agenda.

The CBC ran a news story defending Sharia law, with a headline saying that Sharia is “not to be feared.”

The article quoted a Liberal MP and several spiritual leaders who defended M-103, without providing balance or skepticism over the motion or towards Sharia .

The article explained how Sharia is already in Canada, that it only governs religious practices and only applies to people inside the Muslim community.

It included a quote from an advocate saying that those who oppose M-103 and fear Sharia are motivated by “bigotry, plain and simple.”

Pretending Sharia is already here and no big deal is incorrect; vilifying those who oppose it is both dishonest and dangerous.

Back in 2003, the Islamic Institute of Civil Justice proposed that Muslims have their own tribunals and a parallel legal system – Sharia law – in Ontario.

It was then Muslim activists who took a stand and launched campaigns against these proposed Sharia courts.

Activist Nasrin Ramzanali said that if these Sharia courts materialized, “I (would) feel threatened here.”

Ultimately the Liberal government in Ontario rejected the bid to allow Sharia courts.

We shouldn’t pretend that Sharia already governs in Canada; we should fight against it at every opportunity.

That’s because Sharia is not just a set of religious rules, it is a totalitarian ideology that enforces a sexist and outdated worldview.

Sharia insists that there is no separation between mosque and state, and that Islamic rules dictate both the private and public lives of the people.

Sharia law replaces Canadian law, it doesn’t live alongside it – but that’s not where the trouble with Sharia ends.

Even if Sharia only applied to Muslims in Canada, how would we feel about a set of laws that permits a man to beat his wife? How about a legal system that allows a man to divorce his wife simply by saying the word “divorce” three times aloud?

Sharia is not consistent with our way of life in Canada – despite what Liberals and the CBC want us to believe.

Doing the Ronald and bumping it up...:)

Don't wait on Mr. Nelson, he will duck this blog, this is filtering out like a virus.