Scenes from the Feminist Implosion

If you want to see why modern feminism is in crisis, look no further than Michelle Goldberg’s piece in the latest New Yorker.

She describes how transgender activists are protesting the gatherings of the group “RadFem Responds” with “acts of vandalism — stealing electrical cables, cutting water pipes, keying cars in the parking lot, and spray-painting a six-foot penis, and the words ‘Real Women Have D–ks,’ on the side of the main kitchen tent.”

The radical feminists are under attack because they don’t accept in their ranks people born as biological men but now convinced they’re women. The RadFemmers argue that the transgendered just aren’t oppressed enough to gain membership.

POLL:  Is Christianity under assault from the secular Progressives?

Goldberg explains their position: “Anyone born a man retains male privilege in society; even if he chooses to live as a woman — and accept a correspondingly subordinate social position — the fact that he has a choice means that he can never understand what being a woman is really like.”

Yet the RadFem women are apparently in the minority. Most young Women’s Studies majors consider the transgendered to be whatever the transgendered say they are. As Goldberg also reports, an abortion-access group staffed mostly by 20-something volunteers recently “voted unanimously to stop using the word ‘women’ when talking about people who get pregnant, so as not to exclude trans men. ‘We recognize that people who identify as men can become pregnant and seek abortions,’ the group’s new Statement of Values says.”

If you’re not sure which side of this intrafeminist debate sounds more absurd, you’re not alone.

It’s no wonder the hashtag #WomenAgainstFeminism has become so popular.

The feminists all too often blame all men everywhere for their troubles. This is called "guilt-by-association". No doubt some men are real scum-bags who have grossly abused women. But women should not presume that their troubles would be all over if every man on earth were to die. Sometimes, a woman's worst enemy is---ANOTHER WOMAN!

If Obama has his way, this could be the Poster Board for our New Citizens and their expressed love of their new Country, and in OUR streets: 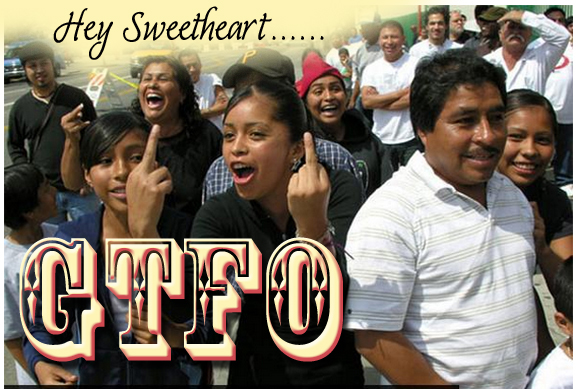 heheheh! Gotta laugh the all exclusive NAGS hehe! I guess they do not like Dick as Jane, Hahaha! Can't think of a better group to be racist and accused of hate crimes against Chicks with Dicks. Haha! best laugh of this morning.