Left-wing Democratic leaders Sen. Bernie Sanders, I-Vt., and Democratic National Committee chair candidate Rep. Keith Ellison, D-Minn., are seeking to rebuild a party that has been left in shambles by the Obama presidency.


The Democrats have lost majorities in the House and Senate and been obliterated by the Republicans at the state and local level since Obama assumed office in 2009. In a speech this week to progressive activists at a rally for Ellison's candidacy to lead the Democratic National Committee, Ellison and Sanders both said the party needed new leadership and noted that it had declined during recent years.


"Clearly, whatever the leadership of the Democratic Party has been doing over the last many years has failed, and we need fundamental change," Sanders said.


Ellison has as his main competition is Labor Secretary Tom Perez, who joined the campaign on Thursday.

Feel free to use it!

Rebuild what?  The Democrats are dead, they committed suicide, and America has wholeheartedly rejected them.    The corruption, and stench of their plan has finally imploded.     Build something with a Communist & a Muslim, sorry, won't sell.     We have a Real American who is going to run our Country for us, again.

The duo of Sanders and Ellison will only move the already decimated political party further to the left and institutionalize their expanding radicalization process. Who in their right mind would continue to shift a struggling political party in a direction that a growing number of Americans have awakened to and have overwhelmingly rejected? 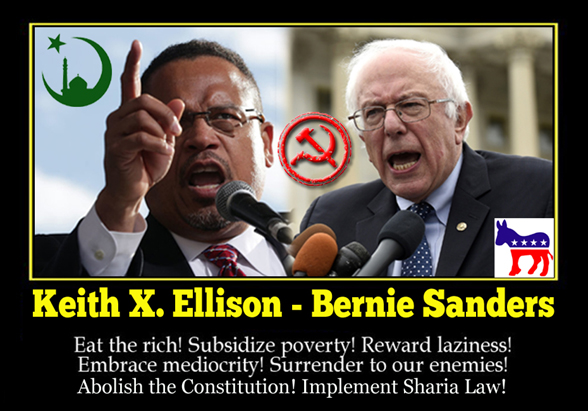 Who? That of course, would be your far Leftists, determined to finish building upon the foundation that Barack Obama began and further initiate the blueprints that will permanently entrench their destructive ideology.

We MUST NEVER allow that to grow. It must be cut out of the American fabric and destroyed, as it will undoubtedly rear its ugly head. If we ever blink in this process, it will overwhelm us, leaving no alternative nor suitable recourse.

Frank, IMHO this is the moment in time when we MUST begin shuttering as much of the FedGov as possible. This must be done SPECIFICALLY to remove from the Democrats' reach every possible toe-hold for vote buying. The bigger, more expensive, and more broad in scope the FedGov is, the more "free-stuff takers" will become beholdin' to bureaucrats and other Democrats. We see this problem in all its glory right now, as we try to kill Obamacare when millions (no, NOT 20 million) of folks have been jammed onto various parts of this collapsing law. The magic solution will be to ensure our adherence to Article 1 Section 8- the Enumerated Powers of Congress. That's the list of stuff FedGov has a constitutional right to address. And remember, there are three parts of Art 1 Sec 8 which have been most abused by Progs (DEM AND RINO): the Interstate Commerce clause (Art 1 Sec 8 Clause 3), the General Welfare clause (in the Preamble, and Art 1 Sec 8 Clause 1), and the Necessary and Proper clause (Art 1 Sec 8 LAST clause). We MUST find a way to ensure these 3 clauses are NEVER AGAIN abused by ANYONE, least of all Repubs.

In truth, I think the Obamacare debacle may not be as easy to kill as we would like. It may take a couple of years to transition it to less than the ponzi scheme it already is. ....though I hope not. It's got to be eventually killed.

The good news is that the DEMs are on the ropes. Yes, I know they still have the media, and yes they still have their big money donors. However, the facts of the people being fed up was growing every day and it's safe to say that liberalism has been repudiated. You're right to say that we shouldn't blink for one second. Tactical pedal to the metal, so to speak.

For the moment, as best as I can see it - this goes even further than just the Trump victory.

FACT: The DEMs have lost 1800 seats in eight years. Wouldn’t any party take a moment for an introspective look at themselves. Like, 'What the hell did we do wrong?' Not the DEMs! Nope. They’re still quite delusional and are letting Elizabeth Warren, Bernie Sanders and Keith X. Ellison to make the strategic decisions. I say, go for it DEMs. Go ahead, keep doubling down and keep asking the lock-step media to repeat all your mindless blames, like Russia, Fake News, Talk Radio, Tea Party, Conservatives, White Supremists.......the boogie man......HAAAAA-HAAAAA!
Prediction: Look for the DEMs to lose more seats during the mid-terms. After Trump’s first 100 days, if he gets impeded in any shape or form by the DEMs, this will surely end their party forever. Think of it, ....if he is not allowed to implement his Make America Great Again in an unprecedented  ‘hit-the-ground-running’ push – he’ll just tweet this frustration out and the DEMs will surely suffer some more. The corrupt media has been significantly neutered.

And we've seen this first hand and are sure to see more of it. :-)

I'm in the "rip off the band-aid" camp. Repeal Obamacare, then worry about what to do later. Since there is no constitutionality supporting healthcare of any kind, I'm happy to see it STAY GONE.
Frankly, Obamacare is a small potatoes problem compared to Medicare and Medicaid. You wanna see pissed off? Take Medicare away from those of US who have PAID into it for 4 decades!!!

Once we're dead- KILL IT ALL.

Eat the Rich by P.J. O'Rourke should be required reading for every year of education, starting at about grade six.

Democrats have already proven they have absolutely no intention of fixing things...they re-elected Nancy Pelosi under whose administration has decimated the party! Ellison is a Muslim follower of Farakhan and Sanders is a socialist! Together they're going to rebuild the party; but the real question is, into what? They just lost all power from coast to coast from the 3 branches of government, the Supreme Court, governorships, and state legislatures because they were so far left; and now they want to move it even further left than before? These people's elevators don't go to the top floor!

Funny, I think Obama has the spot for himself.  haha