Rand Paul calls for declaration of war against Islamic State

Sen. Rand Paul of Kentucky, one of the sharpest Republican critics of President Obama’s strategy to combat the Islamic State terrorist group, is now calling for a formal declaration of war, saying it cannot be initiated without Congress.

Mr. Paul, a likely GOP presidential contender who has tried to shirk the label of “isolationist” some have foisted upon him, would limit military action to one year and restrict the use of ground troops, The New York Times said.

“War cannot be initiated without Congress,” he told The New York Times.

“Conservatives are mad at him about immigration. And they’re mad about him using executive authority on Obamacare,” Mr. Paul said of Mr. Obama. “But this is another example where he doesn’t have much respect for Congress, and some conservatives don’t quite get that.”

The White House has said the campaign against the Islamic State is justified under a 2001 authorization of force passed in the wake of 9/11 and a 2002 authorization for Iraq, but Mr. Obama has said he plans to seek a new one from Congress for the campaign against the Islamic State, also known as ISIS or ISIL, in Iraq and Syria.

Obama is NOT going to do a thing to hurt his buddies!

He will probably bring them to America to destroy us

citizens, sparing the illegals of course! He is supplying

money and weapons to them now! Obama is one of them!

OK Mr. Rand knowing all this do you really think when we the people vote in a new president that Obama will actually leave the White House. I think then you will be in for the fight of your life. What's ya goina  do?

Permalink Reply by Steven BENOIT on November 24, 2014 at 3:44pm
Obama doesn't give a crap about the Muslim. He has bigger fish to fry. When the Muslims are of no further use they will be delt with. But for now they are still useful.

When is America going to wake up !  Obama is a devowed Muslim as he has stated. And he has said that he will stand with the Muslims. Well Mr. Obama... We have had enough of your B.S. and are about to take your reign of terror against the United States down. You will be punished by our " CONSTITUTIONAL " Laws. The people you surround yourself with will also be taken down !  UNITED WE STAND  !!!

What is it about ISLAM that people do not understand????????

Islam is evil! The Koran demands EVERY Muslim to kill non-Muslims as a requirement to get to their "heaven"!! What is the mystery? Why do people keep saying Islam is religion of peace? Why does logical people keep trying to "cover" that evil "religion" called Islam?? The Muslim is REQUIRED TO KILL NON-MUSLIMS TO GO TO THEIR "heaven"!! What is so confusing or mysterious about that? I guess Muslims will have to drop an ATOM bomb or the West to get that message through!!

AMERICANS: WAKE UP!  Muslims are not peaceful people. Muslims hate non-Muslims!! Why do Non- Muslim women insist on a romantic relationship with one who has MURDER in their mind! Muslims LIVE For murder! The KORAN demands and directs MUSLIMS to KILL NON-MUSLIMS!! Any Muslim who says different is NOT a MUSLIM!! Who could live with a murderer or anyone who is capable of murder as a religion? Does that sound like a mentally stable person?? Any Muslim who denies that Islam demands the Muslim Kill non-Muslims is a LIAR! Any Muslims who live in the West or who lives among non-Muslims is NOT living the life that the Koran dictates! EVERY MUSLIM IS REQUIRED TO KILL ALL NON-MUSLIMS and if they deny that fact, they are not living according to the Koran or Islam!!

NOW, what does that say abut Muslims living in USA? It says they all will and are expected to kill Americans or the Muslims are not living a true Muslim life.

Obama is a Muslim, he was raised as a Muslim, attended a Mosque and schooled in a Mosque. He also lived in a communist home and raised as a communist muslim!  What does that tell Americans? HELLO America, what does that say about that POS in WH?  Obama hates Americans and any non-Muslim.  This tells the World why he does not want to kill his Muslim family and he will do anything to help ANY Muslim country! The Muslims are laughing at USA and Obama! They are getting the cash cow without any trouble. Obama and his Muslim administration is always doing everything they can to "kill" Americans, They are destroying American Liberty, USA Sovereignty and shredding the US Constitution! He can not kill too many Americans without penalty, so he  is killing US Liberty! This is NO surprise! The liberal communists Demoncrat Party has put Obama in WH to destroy FREE America! That is what communists do! The Muslims demand Sharia Law be instituted into American life, which is incompatible with everything USA Stands for! This World is in hell because of Islam and USA in particular because of Obama! ANY American who thinks or calls for Obama to use EO to push HIS agenda IS NOT AMERICAN! Anyone who thinks Obama does not have to follow the US Constitution is NOT an American. Anyone calling for Obama as dictator or "king", needs to leave! USA is NOT a kingdom, not a caliphate nor is it a Union! Every one of these are anti-American and does not belong in USA!

Everything Obama does is to provoke the Congress and the American people. He wants to stir up hate, racism and provoke the Government to put him in jail or impeach him to stir up hate and violence in his followers. That is his goal:   WAR between brown skin and Whites!!   This is his ultimate agenda! He deliberately wants to split USA between Brown skin and white skin!  Obama thinks his people will attack Whites and that is his agenda! He intends to cause as much dissention between Races as he can! The more people who hate each other is what he wants. He has a PLAN!! I hope and pray all American's see that and will not blindly follow that POS!

RESTRICT THE USE OF GROUND TROOPS????  BULLSHIT, ANOTHER

NON- SERVING POLITICIAN SENDING OUR MEN TO ANOTHER WAR.

YOU CANNOT FIGHT A FRIGGING WAR WITHOUT GROUND TROOPS.

WHAT A FRIGGING IDIOT.

I'm not even a military person - although I love and respect our military - what is left of them after babo has messed unmercifully with them - even I can see restricting the use of ground troops sounds ludicrous.  Makes no sense.  Rand is not my choice for President.  Never has been and never will be.  He flip-flops - check out his stand on abortion.  Sad.

at least here is ONE person that has the balls to speak out and is willing to do something! Where are all the others?

MUST READ-  I found this story earlier written by a young lady named Marie. She did a lot of research and gave alot of info concerning muslims and the Muslim Brotherhood.

Permalink Reply by ABU TOM on November 24, 2014 at 6:58pm
DEMOCRATS ARE TWICE AS RELIGIOUS THEY WORSHIP THE DOUBLE CROSS

OBAMAS CHOICE FOR SECRETARY OF DEFENSE. 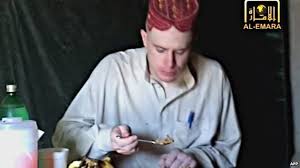 PROMOTED FROM DESERTING PRIVATE TO DEMOCRAT SERGEANT. BO BIRD CALL.
OR IN THE EVENT THAT HE LOSES HIS LITTLE RED COMMUNIST HAT THAT ALL DEMOCRATS WEAR IN SECRET. OBAMA HAS FIVE OTHER CANDIDATES.
www.barenakedislam.com/wp-content/uploads/2014/07/bergdahl-prisoner..." width="231" height="218"/>
IF ALL ELSE FAILS ASK NBC TO LOAN OBAMA THEIR PRESIDENT AL SHARPTON.
WWW.SPIRITOFAMERICAPARTYRADIOSHOW.COM

Permalink Reply by Robert William Metcalf on November 24, 2014 at 10:04pm
My solution is for the Defense Department to let a Soul Source Contract to Black Water to eliminate ISIS. Rules of engagement, None. Prisoners, None. On second thought, let the CIA issue the Contract!

I hate, I mean HATE !!!,  that sorry worthless good-for-nothing White House Worm....But I'm so sick of the sorry-ass republican scum such as the likes of John Boehner. His actions, or rather INACTIONS, towards the White House Worm's actions are showing us the real truth and reality of our votes. And that is that our votes don't really count for anything. Many people in the past used the argument..."Why vote? It doesn't mean anything." And I always tried to convince them otherwise. But spineless, worthless, scum like John Boehner are giving substance to the possibility that those people's reasoning just might be some sound reasoning after all. Damn, we're screwed people....One is a damn traitor, and the other is a turncoat.