Podesta said that the president was committed to using executive orders to  pass regulations under the Clean Air Act to limit carbon dioxide emissions that  they say cause global warming.

“They may try, but there are no takers at this end of Pennsylvania  Avenue,” Podesta told reporters at a Monday press conference at the White  House.

Republicans and some Democrats in Congress have urged the Obama  administration to scale back their climate goals because of the adverse impact  of new regulations on the coal industry. Coal supporters have portrayed the  administration’s actions as the “war on coal” due to huge job losses in coal  states like Kentucky and West Virginia.

Poll: Do you see signs of the UN Agenda 21 being enacted in your area?

“We’re getting the living crap beaten out of us,” West Virginia Democratic  Sen. Joe Manchin told President Obama’s nominee to be the country’s top energy regulator last year.  “There has been nothing more beat up than coal.”

“They just beat the living daylights out of little West Virginia, but they  sure like what we produce,” Manchin told former nominee Ron Binz. “We could do  it a lot better if we had a government working with us as a  partner.”

“Washington should not be using taxpayer money to pick winners and losers in  the energy industry,” Lee  said in a statement. “Consumer-driven, free-market competition provides a  much better way to ensure Americans have access to reliable, affordable  energy.

Obama has made 2014 his “year of action” — promising to use his executive  authority to implement various actions of the President’s agenda that are too  divisive for Congress to consider. Podesta was brought into the White House late  last year to help Obama find ways to use executive orders to unilaterally push climate policies.

YES, Congress COULD stop the POS potus simply by IMPEACHING HIS ASS! podesta is another GREAT IDIOT in the REGIME!

If domocrats desire to control CO2 emmissions as green house gas then perhaps they can reduce the output by just stop breathing and talking. Why do all these we see upfront in media look like the Hitler Administration? Americans can stop this lie and refuse to become a third world nation if we start being honest about what is really happening! Many of us know, why is it that Democrat voters do not see facts? Abortions and alternate bedrooms should not be a reason to vote for destruction!

It is written and we see this coming because honor for what one does is not supported by those who do it! "A loaf of bread for a weeks wage!" Is that not worse than even what Communist enslaved people have to pay? Yes, about 20x! It is coming to America and the whole world if we do not take responsibility for what we do! A fool and their money are soon parted and Democrat voters do not see the light as they keep in the tunnel!

REMOVE THIS TRAITOR FROM THE WHITE HOUSE AND THEN THOSE THAT REFUSED TO FIGHT FOR AMERICA AND OUR RIGHTS! LOOK OUT RHINOS AND THE INSANE LIKE PELOSI!

Yet another Commie baboonzo creep

The data collected from the core drilling in the Artic shows the world has been much higher with CO2 emissions than we have today, the scientists doing this research  have said the Democrats claims of global warming by cows and cars is a falsehood, this cycles over time and will return to normal again. We're spending many billions of dollars to hurt industry because of the Dems plans for other types of energy they have yet to perfect so in the mean time the fraud President destroys companies and mining to make it imperative to have every one spend money that is not there and commit us all to development of an energy that meets their requirements killing jobs and entire networks that were in place before holding us hostage to an idea, not a proven replacement of what we use today. He doesn't care that thousands of jobs are lost and business's going under because of the bogus claims.

What a MORON, someone please give the POTUS a science lesson. Limit CO2 and you limit the growth of plants, limit plant growth and you limit the production of O2. Mr. President can you comprehend this simple process?

Stick your illegal EOs up your a$$.  We are tired of you dreaming up more ways to kill this country then forcing the taxpayers to pay for it.  Are you out of your mind?  Quit destroying this country! Besides you are not eligible to even be here. 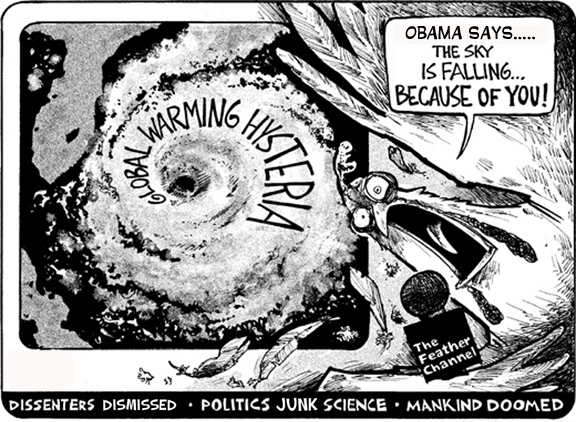