Marcus Peters wants to make statements, not hear them.

NFL players seem determined to ostracize and/or insult their fans. The protests and kneeling were enough to force many from tuning in to games. Lifelong fans were burning tickets and gear, bars began refusing to air games, and NFL ratings plummeted even further. Then several players went one step beyond and failed to stand Monday night, just after the tragic Las Vegas shooting.

Now two videos are circulating on social media showing these poor “oppressed” millionaires snapping and turning their rage on fans. Do they not realize that their salaries depend on these same fans?

Last Monday night during a game between the Kansas City Chiefs and the Washington Redskins, a player from each team erupted in profanity towards some hecklers.

Chief Defensive back Marcus Peters received some likely harsh criticism after letting a Redskins’ player score a 44-yard touchdown. The angry player is heard yelling “F**k you bi**h,” and then seen slamming his helmet to the ground. 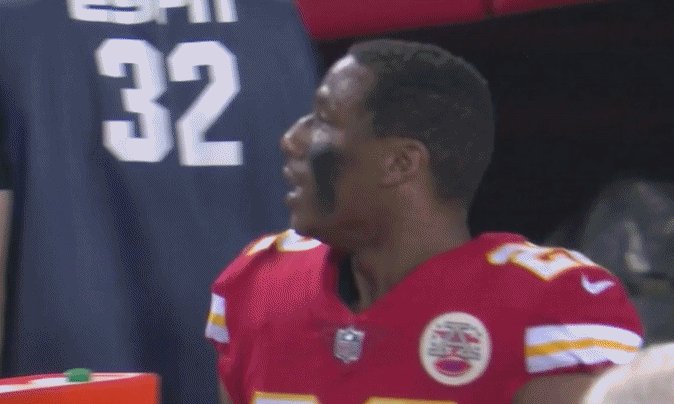 RT if you agree @Chiefs player Marcus Peters should be suspended for cussing out fans! @nflcommish #BoycottNFL


As a side note, Peters was one of three offensive ignorants who sat on the bench this Monday after the mass shooting.

A separate video shows Redskins wide receiver Terrell Pryor getting irate at people heckling him as he walked towards the tunnel that leads to the locker rooms. Pryor flips off the crowd, raises his helmet as if to throw it, and yells “F**k.” A staff member quickly rushes to try and calm the angry Pryor and get him into the tunnel.

These types of outbursts are against the rules of how NFL players are supposed to conduct themselves. Of course, decorum hasn’t exactly stopped these players before. We will stay tuned to see how the NFL responds to this most recent development.

Do I HAVE to ask it?  Seriously...HOW STUPID can they be? I don't remember old "Red" doing this, but I'm not surprised.  This is GREAT!  Thanks for the rerun......it's desperately needed.

my 2¢ = they're all missing the primary point. Doing good for their communities is fine, even good BUT aiming at legislation to do it (political activism) IS NOT!! Do it on your own time, on your own dime, in person as an individual. Another point they're all missing/avoiding is that their right to exercise free speech as a political activist is not under any more oppression than anybody else's if they can't protest the anthem on the playing field. EVERY job most of us has ever had disallows such behavior while on the job/representing the company.

I think the above article is spot on too, even though it doesn't address either of those points.

They are also missing the extremely important point that their own NFL RULES do not allow this behaviour.

Which makes them LEGALLY liable for financial penalties and/or suspension.

Other players could actually sue the NFL for breach of rules, win in court, take the financial settlement, and never have to play another day in their lives.

Precisely.  How does Goodell seem to be ignorant of this?


An NFL fan was spotted at a Jets-Patriots game on Sunday sitting on the American flag, and was captured in a photo that has now gone viral. 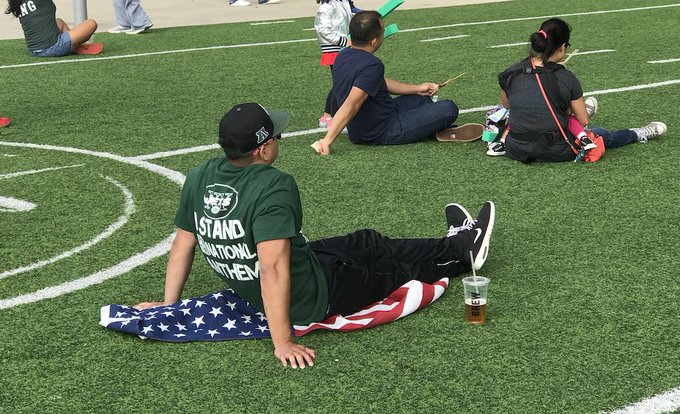 #inners Jets fan who's wearing his "I stand 4 Natl Anthem


The photo was published in an article at Deadspin, and was proffered as evidence that NFL fans’ consternation about protests – any protests – carried out during the national anthem is less than genuine.

It's almost like the whole controversy actually has nothing to do with the flag and everything to do with racism.https://deadspin.com/jets-fan-who-stands-for-national-anthem-sits-on-america-1819512033 …

This man at Sunday’s Patriots-Jets game respects the United States and its national anthem so much that he turned the country’s flag into a picnic blanket. Reader Marshall spotted the patriot, who is...

This man at Sunday’s Patriots-Jets game respects the United States and its national anthem so much that he turned the country’s flag into a picnic blanket. Reader Marshall spotted the patriot, who is better than all of us, at the Jets’ stadium.

Basically, me and my friend were walking around the stadium sometime during the 3rd quarter. There is a huge tv screen by the food carts right inside the stadium where people gather to watch. We went over there to check it out and we saw him spread the flag out and sit down.

I thought it was too ironic so I snagged a picture. He sat on it for a few minutes before leaving.

The kicker? (No, not Chandler Catanzaro.) The T-shirt the bum wore while sitting on the American flag read, “I stand for the national anthem.”

The self-described “fact check” website Snopes weighed in on the photo (as if we needed it):

The image shows an unidentified man wearing a t-shirt bearing the phrase, “I STAND FOR THE NATIONAL ANTHEM” under the logo for the New York Jets. The statement is a rebuke to the kneeling demonstrations that originated with former San Francisco quarterback Colin Kaepernick prior to the 2016 seaso, who began to kneel during the national anthem in order to bring attention to and protest police brutality.

Here’s the problem with this being an argument that fans angry about the protests don’t care about the national anthem.

First of all, it’s an argument by anecdote. As someone who was at Met Life when this exact Jets-Patriots game took place (and yes, I want my money back due to the bad refereeing), I can avouch that there were dozens of people wearing this T-shirt who stood for the national anthem.

Second of all, who is to say this photo wasn’t staged? The flag looks crisp and official; it is not like a blanket or a towel. Therefore, the person had to know that this was not meant to be put on the ground for sitting on. As many of us know, this violates the U.S. flag code:

The flag should never touch anything beneath it, such as the ground, the floor, water, or merchandise.

Even non-patriotic Americans know this, let alone someone who would actually buy and wear a T-shirt stating, “I stand for the national anthem.” Unless it was meant for staging a viral photo, like this one.

It may be true, but that’s an entirely different matter than it being genuine.

It certainly does not reflect the views of millions of citizens who stand for the national anthem and expect their fellow Americans to do likewise, because it’s a time to momentarily set aside our political views for the purpose of honoring the nation’s hard-won freedom.

A am completely TIRED and PISSED OFF about "THUGS" taking over and literally destroying one of AMERICA'S most beloved and ICONIC pleasures and pastimes; FOOTBALL !!!    It will never be the same again even if a rapoachmont is enacted by Players and Management.

While BOTH Players and Owners are at fault for allowing the NFL RULES of Behavior to be "Trashed" to satisfy some UNFOUNDED and DISTORTED LIES that POLICE UNFAILY TREATs BLACKS, it indicates to every AMERICAN that a "MOB MENTALITY"  is replacing due JUSTICE and SANITY as a means for legal redress in AMERICA !!!

It also indicates a SURRENDER of common sense to idiotic behavior. ~~~~!!!!!!!

I have reached the age of 80 years, retired and at Peace with my GOD. I will spend the rest of my time on this planet WITHOUT FOOTBALL and the IDIOTS who have ruined it. Not to mention the MORONIC POLITICIANS and their supporters who are doing their evil best to BLOCK EVERY DECENT AND GOOD thing PRESIDENT TRUMP is doing for our Country.. TRUMP Is the BEST THING AMERICA HAS PRODUCED since the US CONSTITUTION, and deserves every American's support !!!!!!

I will have to say, if you wanted a blitz first and goal this sure does fit the play book. I have read a lot on this, seen a lot of videos, I find it hard to place a personal comment about this, so I want. Keep the boycott going until the players STAND.

The NFL is just a criminal organization now.  Every 7 days at least one NFL player gets arrested.

NFL Players oppressed? From who? Their financial counselors?

Oh yes. The top 5% of all peoples who have ever lived on this planet, and they consider themselves oppressed.