Snake eyes, you die. Seven, eleven, you live. All other rolls of the dice are anybody’s guess.

Yes, just like craps, such is the randomness of President Barack Obama’s gamble on releasing so many radical Islamic terror suspects from Guantanamo and hoping they don’t kill Americans and our allies. Yet sadly it’s no game, countless lives are at stake.

Of the 779 detainees ever held at Gitmo, almost 650 detainees have been released. U.S. intelligence authorities report that nearly 1 in 3 are confirmed or suspected of having returned to terrorism.

Ex-Gitmo prisoners have become leaders of Al Qaeda in the Arabian Peninsula, the Taliban in Afghanistan and Pakistan, and Ansar Al-Sharia in Libya. One became a suicide bomber in Iraq. They’ve killed Americans or our allies in each place, most notably in Benghazi.

Between 20 and 30 men have reportedly joined the Islamic State in Iraq and Syria, serving a de facto regime that’s beheading American and British citizens, while waging genocide against Christians, Yazidis and fellow Muslims in their way.

Permalink Reply by John Thomas Dunlap on January 8, 2015 at 9:22am
Is it not perfectly clear what Obama's motieves are by now . 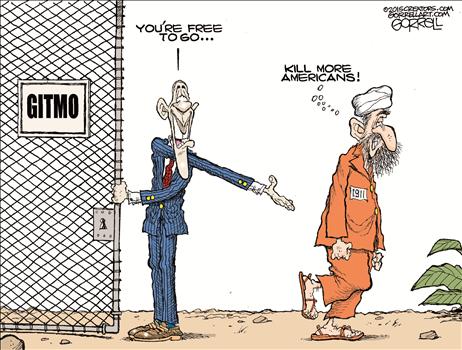 Between 20 and 30 men have reportedly joined the Islamic State in Iraq and Syria, serving a de facto regime that’s beheading American and British citizens, while waging genocide against Christians, Yazidis and fellow Muslims in their way.