Obama Orders That America Take In 70,000 Islamic “Refugees,” But Now John Kerry Says That The Number Will Be Up To 100,000 Muslims 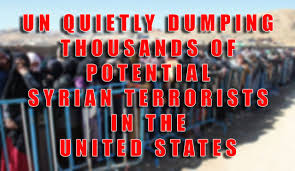 Obama has ordered that America take in 70,000 Islamic refugees. Just today press secretary Josh Earnest said that the United States would “accept at least 10,000 refugees in the next fiscal year,” which begins October 1st. But the whole number that has been authorized is 70,000. But John Kerry, in a closed-door meeting said that the number could be raised even higher, to 100,000. According to one report:

Earlier, Secretary of State John Kerry, said at a closed-door meeting on Capitol Hill that that the total number of refugees taken in by the United States could rise to more than 100,000, from the current figure of 70,000.

When these “refugees” come, what do you think will happen but ISIS terrorists being in the states? The French police are already looking for an ISIS agent amongst the refugees who are heading for England.

An Islamic State combatant believed to be in Calais is being actively hunted by the authorities. … He left Syria at the end of August and hopes to reach Britain where he intends to commit terrorist acts. …He is the subject of most wanted person notice and is considered a threat to state security.

Hungary’s most popular national TV channel, M1, reported Tuesday Islamic terrorists are amongst the refugees and are disguising themselves as refugees:

Islamist terrorists, disguised as refugees, have showed up in Europe. [The] pictures were uploaded on various social networks to show that terrorists are now present in most European cities. Many, who are now illegal immigrants, fought alongside Islamic State before

How the hell does he order anything.  Someone needs to tell him he is not a dictator yet.   He is just a dick

oblamea is a Tinpot dick tator!

I was wondering the same thing Jack. I ain't taken orders since the Marines.

Steve, you hit that on the head! We can't even take care of our own especially our Veterans, & this communist & his Treason Brother Scary Kerry wants to put more terrorist in our mists. It's all part of the One World Govt.. You could see this coming. BUY MORE AMMO!!

Put all 100,000 in Martha's Vineyard or the Hamptons....Wonder if John Kerry will give up a couple of houses he owns to the muslims?...it is only fair that he share his wealth

What is our worthless House & Senate doing about this?? They could cut off Obama's spending for this...AND instead of Christians being slaughtered in Syria & Iraq they should receive FIRST PRIORITY to be admitted to the western nations. Leave the muslim jihadi's for the muslim nations to deal with

WHO THE FLYING HELL IS THE UN TO DO ANYTHING

JUST THIS MAKE AMERICA END BY INVADING IT

Permalink Reply by Odessa taft on September 11, 2015 at 5:16am
They're already here. The state of Minn. is now known as little Somalia. Virginia and Tenn. have Muslim schools supported by our Saudi friends. They are here. In my state I see women wearing head scarves standing at school bus stops with their 3.4 kids. The caliphate is being seeded.

Muslim schools and mosques must be destroyed and all Muslims deported or be deleted permanently. Sharp shooters needed!