In a May 23 letter to Scott Lloyd, director of the Department of Health and Human Services’ Office of Refugee Resettlement, Senator Ron Johnson (R-Wis.) chairman of the Senate Homeland Security and Governmental Affairs Committee, stated that at least 16 self-proclaimed MS-13 gang members were transferred out of federal custody and into community placement centers across the country during the border surge in unaccompanied “children” from Central America in 2014.

In his letter, Johnson referred to Customs and Border Protection (CBP) documents from July 2014, which “appear to show that the federal government [during the Obama administration] knowingly moved self-identified gang members from Nogales, Arizona to placement centers in communities across the country. As you know, it is common for UACs [unaccompanied children] to be released from their placement center while awaiting a court date.” Johnson said the documents were turned over to his office by a whistleblower.

Johnson then asked Lloyd to provide his committee with a number of listed items to assist the committee with its investigation of the infiltration of our country by gang members no later than June 6, 2017.

Johnson’s committee has been holding hearings this week on the “The Rise of MS-13 and Other Transnational Criminal Organizations.”

Johnson also pointed out that the image of UACs as little children is misleading. The reality is, that out of nearly 200,000 UACs apprehended between from 2012 to 2016, 68 percent were ages 15, 16 or 17, i.e., older teens. Furthermore, the majority of these teenagers were also male, making them prime targets for gang recruiting.

In his opening statement for his committee’s hearings on the rise of MS-13, Johnson observed that during the committee’s examination of America’s unsecured borders, “we have learned how transnational criminal organizations and drug cartels exploit American policies and our lack of border security to advance their criminal agenda. Today we continue that important work by discussing how the street gang Mara Salvatrucha, commonly known as MS-13, and other Central American gangs affect communities throughout the United States.”

The senator said that the FBI has identified five hot spots that have a concentrated MS-13 presence and violence: Los Angeles; Houston; the Washington, D.C. region; Long Island, New York; and Boston. He cited figures of an estimated 10,000 MS-13 members in the United States and another 30,000 in Central America.

In his opening statement, Johnson also noted that the five FBI-designated MS-13 hot spots have received a sizeable proportion of the tens of thousands of unaccompanied children (UACs) who have entered the United States. He continued:

The law enforcement officials testifying today have identified the UAC population as highly vulnerable to MS-13 recruitment and exploitation. MS-13 has used American schools to recruit members and carry out acts of violence. The typical MS-13 member today is younger and even more violent than in years past.

A Fox News report on May 17, written before Johnson’s committee began its hearings, quoted statements from Sheriff Vincent DeMarco of Suffolk County, New York, which covers the eastern two-thirds of Long Island. He said that the unaccompanied minor program initiated by former President Obama provided an avenue for members of MS-13 to infiltrate communities across the country.

“These unaccompanied minors who are already MS-13 members in El Salvador have made their way to communities throughout the country, but Suffolk County has been extremely hard hit with this program in that 4,000 minors from El Salvador, Honduras and Guatemala, a lot of them MS-13 members before they came are now in Suffolk County,” said DeMarco.

The report went on to note that President Trump has put MS-13 on notice and vowed to “really go after” the brutal criminal gangs and drug cartels that prey upon Americans. “For too long Washington has gone after law abiding gun owners while making life easier for criminals, drug dealers, traffickers and gang members — MS-13. You know about MS-13. It’s not pleasant for them anymore,” Fox News quoted Trump’s remarks during a speech at the National Rifle Association Leadership Forum in Atlanta in April.

DeMarco told Fox News he is hopeful the Trump administration will continue to combat the increasing gang violence by appointing officials that believe in law, order, and justice. “Homeland Security Secretary John Kelly is doing a great job and homeland security investigations is working very closely with us now too. They’ve expanded a gang task force,” DeMarco said.

While the revelations about MS-13 members’ easy entry into the United may be news to some people, we have written about the situation repeatedly in The New American.

In a March 3 article, we reported that two illegal aliens from El Salvador, identified as members of the notorious MS-13 gang, were arrested in Houston on February 27 and appeared in court on March 1 to face charges of aggravated kidnapping and murder. We reported:

Prosecutors have alleged that MS-13 gang leader Miguel Angel Alvarez-Flores, 22, whose nickname is “Diabolico” (one who is diabolical or of the devil) and Diego Alexan Hernandez-Rivera, 18, held a 14-year-old girl against her will for four days at one apartment and two weeks at another location. During that time, gang members forced drugs and alcohol on her to keep her disoriented and submissive, sexually assaulted her multiple times, and Flores tattooed an image of the grim reaper from her knee to her foot.

In an earlier article posted in July 2014, we reported that 16 MS-13 gang members were among the UACs — unaccompanied “children” — being held at the U.S. Customs and Border Protection Nogales (Arizona) Placement Center. Notice that both the location of this incident, and the very month we reported it, coincide with the information just released by Senator Johnson.

Our report cited an internal summary of Border Patrol operations at the Nogales Placement Center obtained by the Townhall online magazine.

Unfortunately, as Johnson noted in his statement, instead of immediately deporting these notorious gang members, as should have been done, they were transferred out of federal custody and into community placement centers across the country, because they were classified as “children.” Johnson correctly observed that it is common for UACs to be released from their placement center while awaiting a court date. The March report about the heinous kidnapping and rape of the 14-year-old girl in Houston by MS-13 members is an indication of what these gang members can do once they are released.

In our 2014 report, we quoted a statement made to National Review Online the previous month by Art Del Cueto, president of the National Border Patrol Council Local 2544 in Tucson. Del Cueto said that the official policy in place at the time called for Border Patrol agents who recognize the gang-affiliated tattoos on the bodies of young males crossing the border to ignore that evidence pointing to gang membership. “It’s upsetting that a lot of them are 16 or 17 years old and a lot of them are not going to face deportation,” DelCueto said.

Fortunately, there is a new sheriff in town.

Attorney General Jeff Sessions last April vowed to “devastate” the MS-13, calling the group “one of the most violent gangs in the history of our country, no doubt about it.”

Sessions made his statements during an interview with Fox News’ Tucker Carlson Tonight, just hours after President Trump blamed what he called “the weak illegal immigration polices” of the Obama administration for allowing MS-13 to spread to cities across the United States.

Report: Obama Immigration Policy Partly Responsible for Deaths of A... This was part B of 0bama's dreamed of nationalized police force.  This is how he was going to make it happen.

Right out of the Cloward and Piven/Sol Alinsky playbook, create the fiasco/problem, then dream up the solution. Also Hegelian dialect.

So, with MS-13 committing mayhem, murder, rape, violence, then the country would be propagandized with how weak our police is, and soros would pay for some false flag puppet shows to prove it, and the duped public would fall for it, hook, line and sinker. Bring on the nationalized police, we need to BE SAFE.

Just like prophesy already tells us that is what people will do, safety at all costs. Especially at the cost of liberty and freedom. Shit on Obama, throw his lousy ass in Gitmo and torture him till he dies. God forgive me. I really cannot help it when it comes to 0. 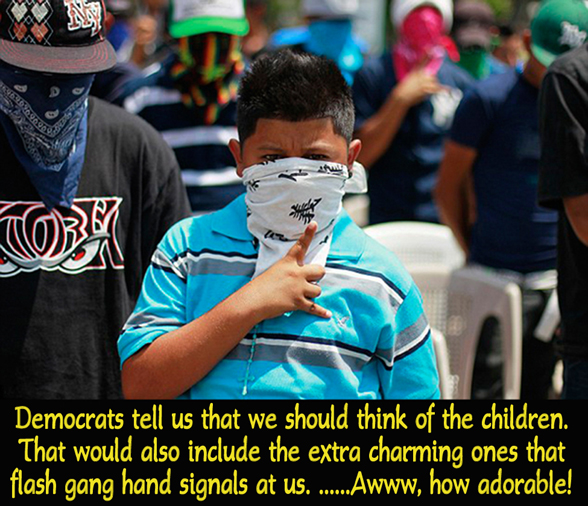 So, Sessions is going to devastate MS-13 Gangs in the US... I would like to know jus how he is doing that and how many he has rounded up?

If that POS o, couldn't destroy America while in office, he'll try other ways! He's hasn't given up! An assassination will do!