North Korea has threatened more attacks against the U.S. government and other American institutions in the wake of the hack on Sony which cancelled the release of The Interview.

The government - which was outraged by the film showing the assassination of leader Kim Jong Un - also claimed to have 'clear evidence' that the U.S. government engineered the project as a 'propaganda' attack against North Korea.

In a ranting post published by the state news agency KCNA, Korean authorities hit back in an escalating war of words in which they say they will 'blow up' the White House - while bizarrely continuing to deny they have anything to do with the cyber attacks on Sony.

Referring to the United States as a 'cesspool of terrorism', the communist dictatorship said that it has already lashed out at the 'citadels of the U.S. imperialists', naming the White House and Pentagon in particular.

A release, translated from Korean, said: 'The DPRK [North Korea] has already launched the toughest counteraction.

'Nothing is a more serious miscalculation than guessing that just a single movie production company is the target of this counteraction.'

'Our target is all the citadels of the U.S. imperialists who earned the bitterest grudge of all Koreans.

'The army and people of the DPRK are fully ready to stand in confrontation with the U.S. in all war spaces including cyber warfare space to blow up those citadels.'

But despite its bellicose language, the state continued to deny it had anything to do with the original hack, for which a group calling themselves the Guardians of Peace has claimed credit.

Well if you recall how the WH said terrorist was supposed to have attacked the Embassy in Benghazi because of a film which showed Muhammad in a cartoon in a bad way by the WH?I guess Kim Jong UN thought if it worked for the terrorist it would work for him to threaten The WH.

You Yankee dog not porojize, ree rill brow up you Right house! 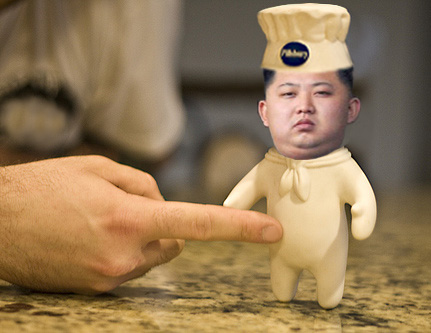 Oh my gosh, Frank, I laughed so hard I cried.   Made my day!

Yep! We can all use a good laugh every day. Thanks!

You can catch them in Hawaii, it's closer!

Oh, please find them in Hawaii!

Please do not miss this chance!

If you think the American people will protest that decision, your strongly mistaken, just make sure he is in and that Congress is in session. This would be the best Christmas present ever to America.

Permalink Reply by terry wayne clark on December 21, 2014 at 9:56pm
Well said Joe get the golf courses just in case

We could take up a collection & put a little something in Fat Boy's stocking to offset the cost.

If it came true, I would be more than

happy to chip in to offset the cost!

GOP= Guardians of Peace, and it is my opinion that the idiot in the White House surely had something to do with it, as much as I hate Communism I welcome their decision.

Now S..t or get off the pot, and don't say something you can't back up.