It is a never ending story of the British Rothschild Banking system, to control all the nations of the world, through wars or through media lies.

While this usually wouldn’t raise any eyebrows – The UN routinely sends these DDR troops to hot-spots throughout the world – what’s concerning here is the UN is not hiring these troops to go to war-zones in some third-world country, they are advertising that the duty station for this post is NEW YORK!

The job listing was posted to the U.N. careers homepage on Dec. 26, and notes they are looking specifically for English speaking applicants – another indicator that this position is not meant for third-world deployment.

What exactly is a UN DDR Officer? 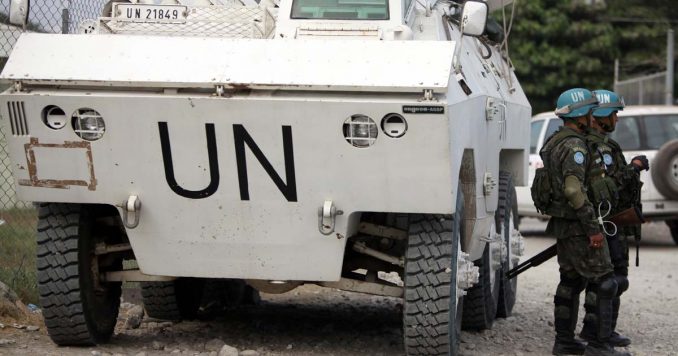 According to the UN, DDR forces responsibilities include disarming the civilian population and “the development of responsible arms management programs” and the implementation of mass detainment camps.

DDR Defined By the United Nations:

Disarmament is the collection, documentation, control, and disposal of small arms, ammunition, explosives and light and heavy weapons of combatants and often also of the civilian population. Disarmament also includes the development of responsible arms management programs.

Demobilization is the formal and controlled discharge of active combatants from armed forces or other armed groups. The first stage of demobilization may extend from the processing of individual combatants in temporary centers to the massing of troops in camps designated for this purpose (cantonment sites, encampments, assembly areas or barracks). The second stage of demobilization encompasses the support package provided to the demobilized, which is called reinsertion.

Reinsertion* is the assistance offered to ex-combatants during demobilization but prior to the longer-term process of reintegration. Reinsertion is a form of transitional assistance to help cover the basic needs of ex-combatants and their families and can include transitional safety allowances, food, clothes, shelter, medical services, short-term education, training, employment, and tools. While reintegration is a long-term, continuous social and economic process of development, reinsertion is short-term material and/or financial assistance to meet immediate needs, and can last up to one year.

Reintegration is the process by which ex-combatants acquire civilian status and gain sustainable employment and income. Reintegration is essentially a social and economic process with an open time-frame, primarily taking place in communities at the local level. It is part of the general development of a country and a national responsibility and often necessitates long-term external assistance.

Why is this Concerning?

Beyond the obvious fact that the United Nations has no business stationing any type of paramilitary forces in the United States, with the recent developments in Virginia, one has to wonder if this is an attempt by the United Nations and their left-wing allies in the U.S. government to go after gun owners.

Think that’s far fetched? Well, consider the fact that the Virginia government officials have already threatened to use the National Guard to disarm Virginia citizens and the governor of Virginia put huge amounts of money into his budget to jail gun owners who don’t comply with their latest gun control measures. So far, 100 counties, cities and townships in Virginia have passed resolutions declaring themselves 2nd amendment sanctuaries, and in some areas of Virginia, local governments have reinstated the militia.

I know this is all just some giant conspiracy theory right?

Well, during President Obama’s term in office, let’s not forget that he attempted a coup on the American gun owner by submitting the U.N. Arms Trade Treaty to the U.S. Senate for ratification.

In April 2013, the United Nations General Assembly adopted the Arms Trade Treaty that aimed to regulate the international trade in conventional weapons ranging from small arms to warships.

Purporting to set the standards for “National Regulation of Civilian Access to Small Arms and Light Weapons,” Module 3.30 creates a means to almost entirely limit civilian access to small arms under the guise of International Humanitarian Law, International Human Rights Law, and Gender-Based Violence. Highlights include, but are not limited to; a ban on civilian possession of “military” style arms – no automatic weapons or magazines with over a 10 round capacity, ballistic recordings, different risk classifications on types of firearms (i.e. calibers over .45 are an intolerable risk to public safety and semi-auto handguns and rifles are high risks), licensing and registration of all firearms, training and storage restrictions, waiting periods, 20-year record retention requirements of sellers, age limits and requiring a demonstrated need to possess a firearm, with self-defense not being one of them.

But the very fact that democrats in the U.S. government were so willing to give the United Nations control over our gun rights is a huge indication of what the end game really is. This may be nothing, or it could be part of a larger plan to disarm the American people!

Exposing it will not stop it, other plans must be done.

Yes, you are right, so what changes need to be made?

Correct, we only need to read Cornwallis's words during his so called surrender to Washington 1781. Keep in mind this was English Mason to Mason.

Thank you Richard, I will send in the link to the network, and Ronald is having a poo party every since this blog came on line: https://teapartyorg.ning.com/forum/topics/the-jewish-pioneers-of-se...

In team sports... every agent in the game is an individual with their own position and purpose within the team... they are all working toward a common goal, but with specific functions. Likewise, the new world order is a consortium of individual elements... groups organized to achieve a common goal.. one-world government.

Too, say that there is no New World Order simply because they are not all located in a singular, identifiable, corporate entity, is to ignore the existence of communities of power and special interests who collaborate to achieve common goals. The New World Order doesn't reside in a high-rise building in downtown, Manhattan, NY, and you won't find them listed on the NY stock exchange... but that doesn't mean they don't exist.

One need only review some of the agencies of the New World Order to notice the same individuals' names are repetitively listed as their leadership. Agencies with a common leadership and goals can be considered 'conspiratorial teams'... working for common purposes... in this case, a New World Order.

Here are just five of the more prominent and important agents of the New World Order:

The UN, The Council of Foreign Relations, The Bilderberger Group, The Trilateral Commission, Free Masonry.

All of these organizations and agencies engage in work supporting a common purpose... a one-world government and economy. Albeit, the common goals of these groups are expressed differently, their ultimate purpose is to bring the world into unity, thru economic and governmental agency. Individually, these groups may appear benign, but each is a key piece in the conspiracy/plan that brings about a New World Order.

How is that team you was putting together Ronald??? no team yet...:)

I didn't know I had attempted to put together a team... where did you get that idea?  What kind of team would that be... boxing or baseball as they are the only two sports I have any competence.

Fine but I doubt you are good enough to make the team... maybe, water or bat girl... possibly, cut woman in our corner... but that may be problematic. No pink dresses allowed in the ring.