There was a surge of anti-Christian violence by Muslims around the world that included the destruction of nearly 200 Christian churches in Nigeria during a short period around October, according to a new report from the GateStone Institute.

The organization’s Raymond Ibrahim, who has documented his discoveries in “Crucified Again: Exposing Islam’s New War in Christians,” released the assessment of the recent surge on Friday.

“In just two months, from August to October, nearly 200 Christian churches were destroyed in Nigeria by the Islamic organization Boko Haram and its Muslim allies, after their capture of towns and villages in the northeastern states of Borno and Adamawa,” the report said. “In the words of Rev. Gideon Obasogie, the director of Catholic Social Communication of Maiduguri Diocese in Borno State, ‘the group’s seizure of territory in both states has seen 185 churches torched and over 190,000 people displaced by [Boko Haram.]”

Ibrahim noted that, “Also in October, the Center for the Studies of Global Christianity in the United States concluded that, ‘About 100,000 Christians die every year because of their religious beliefs, that is to say one every five minutes. In addition, in many countries, many other religious minorities suffer violence and persecution. In countries such as Iraq, Syria, Nigeria, Cameroon, Sudan, Pakistan, Somalia and Egypt the Christian elderly, women, men and their children live in conditions of total insecurity. They are driven from their homes; put in prison for blasphemy, and brutally killed during liturgical celebrations, churches are burned. Girls are kidnapped and forced to marry.’”

Among the other incidents of Muslim violence against Christians during that October period that were uncovered by Ibrahim include:

You Marilyn, got it right.     Why, when he wrote in his book "He'd stand with the Muslins." people just don't get it.     We should all start shipping Prayer Rugs to the WH.     An extra wide one for Michelle. 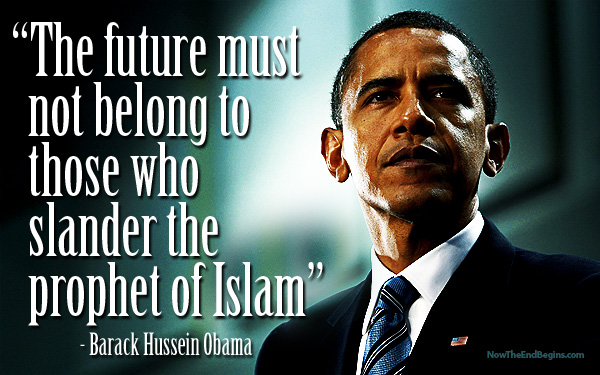 Ibrahim writes in his report, the compilation isn’t meant to be exhaustive.

“While not all, or even most, Muslims are involved, persecution of Christians is expanding. ‘Muslim Persecution of Christians’ was developed to collate some — by no means all — of the instances of persecution that surface each month. It documents what the mainstream media often fails to report. It posits that such persecution is not random but systematic, and takes place in all languages, ethnicities and locations,” he explained.

Truly we can say we are living in the last days. The christians are being tested and murdered for their faith. These evildoers will not get a free ticket. God will deal with them in His own way in His good time and then the hammer will drop. Hold on Christians for your redemption is very near. God give them strength in these evil times is my prayer.

Amen, Lou.  You comprehend well.    God wants us to rise against Evil.    These people are the Spawn of the Devil, and we must do our part.    It is going to take more than Prayer to get out of this one.     I'm praying all the time I am resisting.

Your Pope is part of the problem and we know what to do and one is to pray the other is found in Luke 22:36

Sorry again Barry praying is not going to help anyone. I dont need to read any quotes from the bible, I know what needs to be done. The only way to stop bad guys with guns is good guys with guns, Grow up.

I was thinking more like Psalm 14:1, but hey maybe I am missing something here.

You just keep praying Barry that will save the Christians . And no Barry I dont agree with anything in scripture. My belief is in common sense. Try that sometime.