NC county commissioner storms out of meeting during Muslim prayer: ‘I don’t need no Arab telling me what to do’ 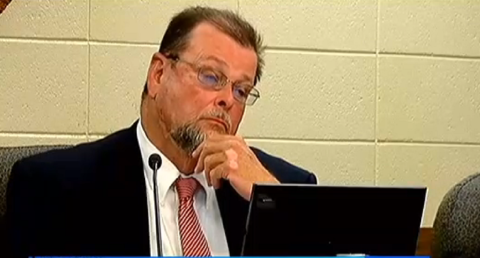 he Lincoln County Board of Commissioners had always opened government meetings with Christian prayer. About two months ago, officials decided that in order to avoid legal trouble, they’d have to let everyone participate.

On Monday, commission chairman Carrol Mitchem, who had previously announced he wouldn’t “bow to minorities” and that he “ain’t gonna have no new religion or pray to Allah” at board meetings, held true to his word and walked out on the first person to address the North Carolina government meeting with a Muslim prayer, the Lincoln Times-News reports.

“That was very upsetting. It was upsetting,” Dustin Barto of the Foothills Interfaith Assembly, who had led the Muslim prayer, told WSCOTV.

By the end of the meeting, all prayer was banned at board meetings and will be replaced with a moment of silence. Commissioner Alex Patton initiated the motion which was easily voted into effect.

“To me, the final straw was when our chairman got up and walked out,” Patton told WSCOTV, adding that the commission needs to focus on pressing matters like the economy and education.

Yes he should walk out - problem is so should the others.

Permalink Reply by JOHN LIESKE on August 5, 2015 at 5:16pm
GOOD JOB !
THIS COUNTRY WAS FOUNDED BY GOD !
NO PLACE FOR A GOAT POKING MUSLIM !

There is a religious war happening right now between the Christian Nation and the Muslims who are using our system for their benifit. What is so bad is the government has bowed down to these people. And I mean all three branches of the government are in the Muslim's pockets. Just look at the Clintons and Obama. I'm sure they're others in our legislative both the House and Senate.

Folks, as never before, we need to not just watch the debates and attend conventions and candidate picture-ops and hear the words they speak. It is easy enough for any reasonably educated person to read a speech or sermon someone else wrote for them and do so in front of a mirror or video camera or "Photo Booth" on a Mac until they and the speech writer, campaign manager or other trusted advisor, are satisfied with the enunciation, the pauses for effect, the correct pronunciation, the gestures of the hands, sometimes legs if visible, (not behind the podium) and the overall body language. But look at what a spoiled brat Trump was when Megyn Kelly asked him questions every possible voter for him needed to know. The temper tanrum, the name calling and the psychotic claim that these opponents were doing things against him. Of course. They all want to be President and each shows what he or she is made of under criticism — and by their criticism of others. How do they take it? Then consider if this person was President and was meeting with another President or Prime Minister or King and either his counterpart or an advisor, whether one of his own or the other ruler's said something that irritated him. Would he pull a "Trump tantrum" like he did last night and apparently is still doing. As far as I am concerned that him down at the BOTTOM of the list I would choose, along with Gov. Christie.

Historically such conduct has started wars!

So, to get back to the point, We need also to know a little about the candidate's actual life history. Has he or she always been helpful and friendly, yet ready to stand tall when danger is near and confront any enemy? Are they inclined to temper tantrums? Did they have them as a child but outgrow or resolutely overcome them? Was he or she raised in a wealthy or middle class family, or one that lived in the slums? A silver spoon or picking garbage? What did he or she overcome to become what he or she is today? Was the person raised as a Bible believer (regardless of denomination or theological persuasion), or a Muslim or a Buddhist or some other religion? What set of moral values does the person hold from that background? Is honesty and integrity an ingrained quality of life or put on for the media cameras at election time? Is he or she steady under pressure? At what level do they give in to pressure? What kind of pressure? Is the person a careful money manager or a spendthrift? And the list could go on.

How many of us have ever stopped to think of the qualities a President should have to confront all the daily decisions he or she must make — some relatively unimportant, others with deadly global consequences. Will he listen to reason and evaluate it wisely?

If these questions make you say, "Oh, Me!" because you realize you have let a handsome man or pretty woman and the way he or she says things be your reason for voting for him or her? Every election is important and in America, we often even get time off from work to go vote at full pay, but because of the monumental damage to our national financial stability, security status, military preparedness, and the freedoms guaranteed by our Constitution but now being rapidly taken away by the stroke of a pen of a defacto Dictator, we need to be especially careful whom we choose. If you are a parent or grandparent, what example will this or that candidate be to your descendants? Will he be a real hero figure like Ronald Reagan or George Washington or a contemptible person? In making these analyses, if the person is from a Muslim or other belief system is he or she and has he or she been among the radicals or the main teachings of the founder of that religion? For examples, Buddhists are usually peaceloving and strong followers of respect for elderly. No real danger there. How about a Muslim from a Mosque where the best teachings are the rule, or one headed by an anti-American, anti-Christian, anti-Israel madrassa or Jihadist? If you find out these things, and for public figures there is usually plenty of info, you should have realized someone raised in a Communist envrironment and a Muslim environment and the "Christian" church he attended was more of an anti-white hate church than one that taught the love of Jesus Christ, there should have been plenty of warning flags as to what would happen if he were elected. So who's to blame?

Who's to blame?  The loafers that have never worked a day in their life, who voted for him.

On this column, we are pretty much preaching to the choir. If we would all begin to go out into the highways and hedges with a zeal like Christians should have, but not for church only but to "Cry Aloud! Spare not!" warn our neighbors of the danger of the PROBABILITY of the devaluation of the dollar. Warn them that this PresiDictator already tried twice to start what was supposed to be a "limited nuclear attack" against the Russian Federation, once in February and again in March but the persons responsible either resigned rather than "do it" and set up a fail-safe system that the second hero, a Navy Four-Stripe Captain, who lost her job and was arrested for refusing to push the "Arm" button that would have started it. Don't take my word for it! Do a Google or Yahoo search (NOT ASK!) and find out for yourself — but make sure you believe sources you are as sure as possible are honest fact, not opinion. YOU have all kinds of talking points here, now get out and talk to your neighbors. Personal word of mouth recommendation is better than an expensive TV, newspaper or magazine ad.

I want to know where our military  - THE ONLY ONES WITH THE AUTHORITY TO - IS NOT ARRESTING THAT  QUEER MUSLIM S.O.B. IN THE GAY HOUSE !!!!!  THE ONLY WAY WE WILL EVER BE RID OF HIM AND HIS MUSLIM SLIME FRIENDS IS FOR HIM TO BE ARRESTED FOR TREASON, TRIED, AND  FACE A FIRING SQUAD OF SOME OF OUR BEST. I WILL VOLUNTEER TO BE ON THE FIRING SQUAD !!!

Once that happens, every red blooded, AMERICAN - not the toadfrogs, and goat humpers currently  residing in the Queer House, will happily round up every whiney a$$   all screwing   goat herder  and put them on a very leaky boat back to the hell they come from.

There will be a lot of people volunteering for that joyous occasion.

You're my type of gal Bobbi, that's telling it like it is.

Amen to Carrol Mitchem and I am sure I'm not the only person who saw this and feels the same way I do and I persnall would like to tell Dustin Barto of the Foothills Interfaith Assembly that the Lord will bring his wrath down on him for leadingthe Muslim prayer and he deserves to be thrown out of the commission meeting and never allowed back in.  We need more people to stand up for the Lord and what is right and just think in NC how there are these hypocrites who are worshiping Allah. There is a judgement day and it isn't long off, so Mr Mitchem just hang on and you will see how the Lord will bring his wrath down on these morons.  I mean morons, scumbags, and whatever else anyone wants to call them.  Another thing this Mr Barto needs to be thrown out of N C and even thrown out of the US.  Send him to Iran and lets see how long Allah will be his God.