MILLENNIALS REJECT CAPITALISM SHOULD AMERICA DO THE SAME?

America is great in part because of capitalism. However, the Millennials reject the free enterprise system but offer nothing in it's place. Therefore, the government will fill that void.   Do you agree?

Chalk it up to the dismal job public education does teaching young people about history, economics, and politics.

In an apparent rejection of the basic principles of the U.S. economy, a new poll shows that most young people do not support capitalism.

The Harvard University survey, which polled young adults between ages 18 and 29, found that 51 percent of respondents do not support capitalism. Just 42 percent said they support it.

It isn’t clear that the young people in the poll would prefer some alternative system, though. Just 33 percent said they supported socialism. The survey had a margin of error of 2.4 percentage points.

The survey, however, is misleading. The United States economy is not capitalist in the true sense of the word.

Instead, it is a crony capitalist economic system dominated by large multinational corporations that buy politicians, establish monopolies, and rely on state intervention to eliminate competitors and gain special privileges in regard to regulation and taxation.

True capitalism is based on laissez-faire economics, a free market, private enterprise and, contrary to the system in place today, a strict separation of state and business.

“A purely capitalist economy ought to have the following characteristics: private ownership of the means of production and capital; low levels of taxation and regulation; competition unfettered by subsidies, bailouts, and protectionism; and the free flow of goods, services, and capital both domestically and internationally,” writes Marian L. Tupy. “Lastly, and here the government does have a crucial role to play, a capitalist economy ought to have an independent and efficacious judiciary that protects life, liberty, and property, and punishes fraud and theft.”

The entire generation of millennials should have been aborted.

Permalink Reply by Charles Ramsay on April 27, 2016 at 8:36pm
Where do they think all these freebies they advocate derive from? The freebies do not last forever like Margaret.Thatcher once pointed out the ultimate game of socialism is to break everyone. Winston Churchill proclaimed the inherited virtue of socialism is equal sharing in misery. 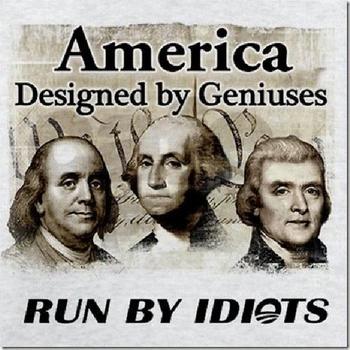 Permalink Reply by Charles Ramsay on April 27, 2016 at 8:57pm
Not just idiots but educated way past their intelligence.

Millennials see "Trump 2016" chalked on the sidewalk and start whining how they need a "safe space"?

Millennials become hysterical when they see a priest in white robes and claim he's the KKK...

Millennials are always "offended" by something.  Geez...pull up your big girl/big boy panties would ya'?

They have to post EVERY moment of their life on social medias............MORE narcissism

Constantly checking notifications to see how many "likes" they have.............MORE narcissism

Children go to birthday parties now....and ALL of them have to get a present, so they won't feel left out.

Kids participating in a sports event ALL have to get a ribbon or trophy, even if just for showing up so their feelings won't be hurt.

Is it really necessary for the Wisconsin Interscholastic Athletic Association to ban phrases such as “Air Ball, Sieve, and Scoreboard?” Is it really imperative to ban booing at a game so others don’t get their feelings hurt? That is what competition of sport is about. It’s a game and it has both serious and fun aspects. I agree “booing” can be very rude, but creating rules against friendly competition is constructing a nation of dumbed down, thoughtless, robotic wussies.

I think our American culture has been too babied and too comfortable for too long. We haven’t had a serious economic depression, a war on our soil, or a tragic medical epidemic to create a sense of gratefulness. Instead, we contrive situations that are ridiculous.

What kind of kids are we raising today who need such coddled protection?

The University of Missouri recently created the Thought Police on campus. Anyone on campus is encouraged to report offenders who have experienced or witnessed an incident. Yes, witnessed. What if no one was actually offended in said alleged verbal offensive situation? An anonymous witness will alert the Thought Authorities nonetheless. While the magnitude of potential preposterous situations makes me roll my eyes, the serious ramifications should make you shudder. It’s not just Missouri; there are colleges across the country. Google the incidents at the University of Iowa, California State University at Fullerton, or even the U.S. Department of Education who mandated a speech code for campuses receiving federal funding.

40 percent of Millennials say the government should be able to prevent people from publicly making statements that are offensive to minority groups. Forty percent! Our free speech has been one of the unique traits about America.

God help these little fools....   WHAT are they going to do when handed the reins of this country, and everyone with a lick of common sense is dead and gone and they have to stand up to an aggressive country?

"God help these little fools"  that is absolutely right on.  Most of them do not know who God is. I saw a video of a man asking people on the street questions, I think in Calif., and one question went something like this "what year did Lee Harvey Oswald shoot Jesus"?  None of the people questioned knew which end was up.  What a bunch of stupid people live in this country.........and they vote.  I keep hearing about the big loans that college students have when they get through with their "education" and I ask myself why they are so stupid to take out those loans in the first place.  The only people who profit are the colleges and universities.  A professor asked the students in a college class I was in......."what goals do you have when you get through college"? and most answered "to make a lot of money".  Incidentally, I worked and paid my way through college.

How did we get to this point?  Forgetting God, parents have raised a generation of lazy, selfish and ignorant fools.

Oh yeah....I remember that video.  All I could was shake my head in disbelief hearing something so STUPID.

Man on the Street Monday: Mark Dice asks people what year approximately Jesus died, and if there were stricter gun control laws back then, if that would have stopped Lee Harvey Oswald from shooting Jesus. You have to see their answers to believe it.

The millennials have been brainwashed since diapers...and do not know why America is great......only by re-educating them will they ever realize their folly...sometimes one on one. It is up to us to see that this is done.

It's way past time to bring back the BASICS...

Good one Marilyn and perhaps Missouri should consider leaving the South Eastern Conference since on a particular Saturday the University of Mississippi  a k a the Rebels of Ole Miss are scheduled to play there. Imagine the hysteria.

The Millennials are the idiots who support Berney Sanders and Hillary,they have no experience at anything and are going to be failures in life,Capitalism has been a success in America and has made us the envy of the World and it must stay,redistribution of wealth is a Communist concept and is a failure and an example of Obamas way of doing business, he has no idea what he is doing after nearly eight years of trying to be President, he is a total failure and has hurt America which was and is his goal,when the uneducated Mellennials go out to make a living to support themselves there will only be jobs no one wants with low wages so they need to do some research and make a wise decision to go to school and look at the jobs that are in demand with a future,no one is going to hire them unless they are prepared to do their part to make a business successful and they will be rewarded in the end.