Senate Majority Leader Mitch McConnell is demanding answers from the Obama administration about the cost of a proposed campaign geared towards promoting healthcare exchanges created under the Affordable Care Act.


"I am interested in knowing what resources the administration believes it has for such a campaign," McConnell wrote in a Friday letter to Health and Human Services Secretary Sylvia Burwell.


McConnell said he only learned of the exchanges by reading reports in the media, and took a shot at "the failed Obamacare exchanges" by noting that major insurers are starting to pull out.


"Nearly every day brings another set of stories about the dysfunction of the Obamacare exchanges and the negative impact on consumers," he wrote. "More recently, we have learned ... that Obamacare's onerous rules and poor implementation have caused a number of insurers to withdraw their participation from the exchanges, leading to fewer choices ... for consumers in the marketplace."

To hell with RINO McConnell - what the hell would he do with answers anyway??? The lying little bastard needs to go finish swallowing his turkey looking chin and choke himself to death..!

A little late to the show, don'tya think, Mitchie?

Where were you when Obama, Pelosi and Reid rammed that criminal garbage down the American people's throat... look at all the taxpayers money you cost us..!!!

No one cares what he says.  THe facts are the facts.  This was planned all along.  Single payer system here we come.  Millions will die. 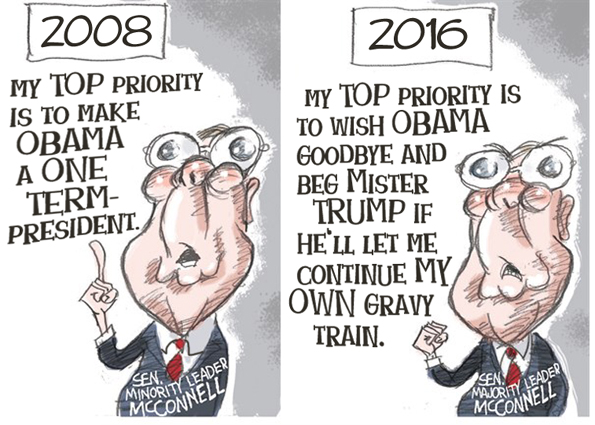 Does the turtle man ever look in the mirror...he and ryan funded all king o wanted and then some.....and yet Wis put ryan back in.....and THAT is what is wrong with the American people!