"... troubling indication of the dysfunction ..."

Sen. John McCain, R-Ariz., described the Trump administration as being in “significant disarray” following the resignation of Lt. Gen. (Ret.) Michael Flynn as national security adviser on Monday and joined many Democrat lawmakers who are questioning the administration’s intentions towards Russia.

McCain, who serves as chairman of the Senate Armed Services Committee, told ABC News, “There are lots of questions” the administration needs to answer. “Obviously, there is an administration in significant disarray, as far as national security is concerned.”

In a statement released Tuesday, the senator said, “General Flynn’s resignation is a troubling indication of the dysfunction of the current national security apparatus.”

McCain added, “General Flynn’s resignation also raises further questions about the Trump administration’s intentions toward Vladimir Putin’s Russia, including statements by the president suggesting moral equivalence between the United States and Russia despite its invasion of Ukraine, annexation of Crimea, threats to our NATO allies, and attempted interference in American elections.” 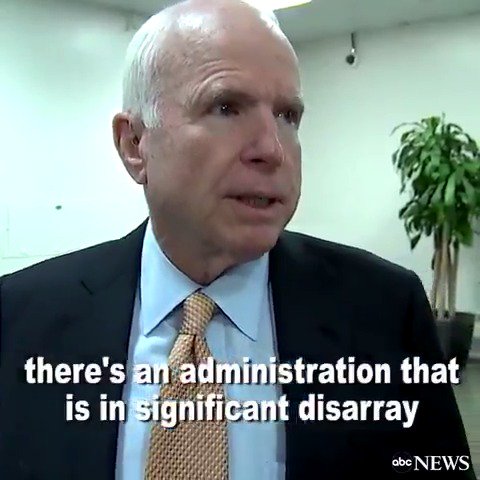 .@SenJohnMcCain tells @ABC the Trump admin "is in significant disarray as far as national security is concerned." http://abcn.ws/2kmMQQN


He argued for a more forceful stance toward Russia that includes reconfirming the U.S. commitments to NATO, establishing a stronger military deterrent stance in Europe, and maintaining sanctions on Russia, “so long as it continues to violate the sovereignty and territorial integrity of Ukraine.”

“I think Congress needs to be informed of what actually General Flynn said to the Russian ambassador about lifting sanctions,” Graham told CNN on Tuesday. “Did he say anything at all or is this just being spun by the media?”

“Maybe General Flynn went rogue, but that’s a question I’d need to know more,” Graham added. “I think most Americans have a right to know whether or not this was a General Flynn rogue maneuver, or was he basically speaking for somebody else in the White House?”

Senator @LindseyGrahamSC: "I want to know did Gen. Flynn do this by himself or was he directed by somebody to do it?

Graham also said the wanted to know if Flynn “was somehow compromised.”

“If somebody in the administration is subject to being blackmailed, I think that’s something I’d like to know about,” he said. “I think if the shoe were on the other foot we’d want to know the answers to these questions. Did General Flynn act alone?”

As reported by Western Journalism, House minority leader Nancy Pelosi, in a statement on Tuesday, called for a full and independent investigation into the Trump administration’s Russian connections.

“The American people deserve to know the full extent of Russia’s financial, personal and political grip on President Trump and what that means for our national security,” she said.

Senate Minority Leader Chuck Schumer is also seeking an investigation along these lines.

McCain has assumed the role of Trump’s chief Republican antagonist in the senate. Since Trump’s inauguration a little over three weeks ago, the Arizona senator has said the president’s plan to have Mexico pay for a border wall is “not a viable option,” broke with him on the immigration order, warned him about rapprochement with Russia, and hammered him over backing away from trade agreements. 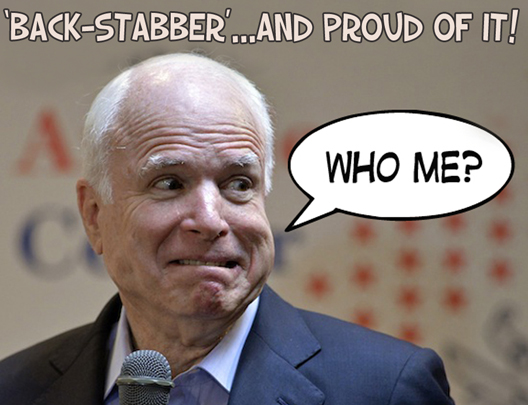 If there is ever a time that voter fraud is being conducted by the GOP, it's got to be employed around election time when this political traitor comes up for a vote. He' manages to get elected time after time after time. Who in their right mind would continue to allow this proven back stabber to remain in office for so long? I mean, how does this embarrassing outcome keep happening?