“I cannot in good conscience vote for the Graham-Cassidy proposal,” the Arizona Republican senator said in a statement, using the bill’s nickname.

McCain – who helped kill the so-called “skinny repeal” back in July – once again was considered a key vote on the current bill, as one of just three wavering GOP senators.

His opposition could effectively doom the bill, which Senate leaders were hoping to bring to the floor next week ahead of a looming deadline. If Republicans cannot pass a bill in this window, it could also mark the end, for the foreseeable future, of the party’s broader efforts to roll back former President Barack Obama’s signature health care law.

McCain announced his decision in a lengthy written statement, warning the bill from Republican Sens. Lindsey Graham of South Carolina and Bill Cassidy of Louisiana was being rushed.

“I would consider supporting legislation similar to that offered by my friends Senators Graham and Cassidy were it the product of extensive hearings, debate and amendment. But that has not been the case,” he said. “We should not be content to pass health care legislation on a party-line basis, as Democrats did when they rammed Obamacare through Congress in 2009. … I cannot in good conscience vote for the Graham-Cassidy proposal.”

With his statement, McCain joins Sen. Rand Paul, R-Ky., who before Friday was the only Republican who had come out firmly against the bill, arguing it doesn’t do enough to roll back ObamaCare.

Senate Republicans hold 52 seats, so McCain’s opposition does not outright kill the legislation.

But the push is precariously close to collapsing. The position of two other Republican senators, Susan Collins of Maine and Lisa Murkowski of Alaska, is not yet firm – but Collins said Friday she’s leaning against the bill.

On Friday evening, Murkowski said she was still undecided.

Unless both senators come out in support of the plan – or Senate Majority Leader Mitch McConnell, R-Ky., can pluck off a Democratic vote or two – Republicans will not have the votes in the Senate.

“John McCain shows the same courage in Congress that he showed when he was a naval aviator. I have assured Senator McCain that as soon as repeal is off the table, we Democrats are intent on resuming the bipartisan process,” he said in a statement.

Graham, who is friends with McCain, is not giving up hope. In a statement, he said he “respectfully” disagrees with the Arizona senator, calling his bill the “best chance to repeal and replace Obamacare.”

“I’m completely convinced taking money and power out of Washington and returning it to states to administer health care is the best way to replace a collapsing Obamacare system. I’m excited about solutions we have found in Graham-Cassidy-Heller-Johnson. We press on,” he said.

Trump, meanwhile, has fought hard to rally support for the Graham-Cassidy bill, tweeting a warning to Republican foes on Friday morning that the fate of the Affordable Care Act is in their hands.

“Rand Paul, or whoever votes against Hcare Bill, will forever (future political campaigns) be known as ‘the Republican who saved ObamaCare,’” Trump tweeted.

The reason Republicans were moving quickly to pass the bill is because they face a Sept. 30 deadline, after which special rules that prevent a Democratic filibuster will expire.

The Graham-Cassidy bill would repeal major pillars of Obama's law, replacing them with block grants to states to design their own programs. Major medical groups are opposed, saying millions would lose insurance coverage and protections.

Is this miserable scumbag STILL alive?

UNFORTUNATELY.   I hope his last months are horribly painful........while he lies there and can think of all the people he didn't give a damn about getting any kind of healthcare.  What a pathetic excuse for a human being.  He should have gone down with all the shipmates he killed on the Forrestal.

Take Graham with you, ple-e-e-e-ease! 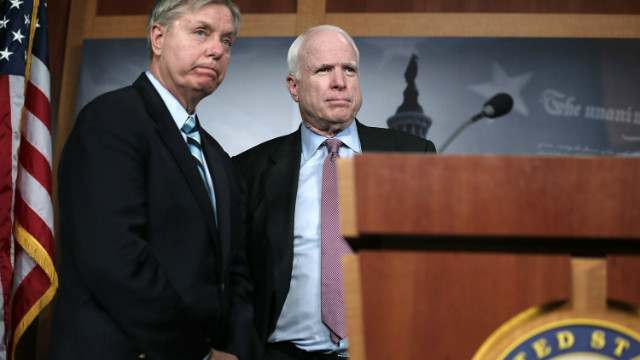 It would be the FIRST TIME McCain's "CONSCIENCE" EVER was a reason for anything he did !!!!

His track record of being a consumate LIAR.  FRAUD. and a TRAITOR belies anything he could do or say, that could warrent a truthful explanation for his threatened NO Vote on OBAMACARE removal.

THE  MEDICAL DISASTER that will follow a defeat of the BILL, will only prove the DEMOCRATS outrageous attempt to SOCIALIZE MEDICINE not only was a complete failure, but will cost the AMERICAN PUBLIC a HORRIBLE LOSS both FINANCIALLY and SENCELESS LOSS OF LIFE and DECLINE IN HEALTH CARE.

The American PUBLIC will have once again been the VICTIM of the SWAMP PEOPLE that TRUMP has so vehemently opposed and wants to remove. So we have STILL failed to target the DEMOCRATS and REPUBLICANS in OFFICE who wish to PROTECT THE GOLDEN GOOSE that Lays the GOLDEN EGGS for their very own edification.

I Don't blame TRUMP at all in this,  Only the CORRUPT GREED and AVARICE that embraces the entire Washington Establishment and the LEMMINGS that feed the GOOSE !!!!  We still have a long hard road to trod. It means that we ALL must TREBLE our efforts to SUPPORT PRESIDENT TRUMP in his CRUSADE against the enemies of our REPUBLIC, of which there are MANY !!!! 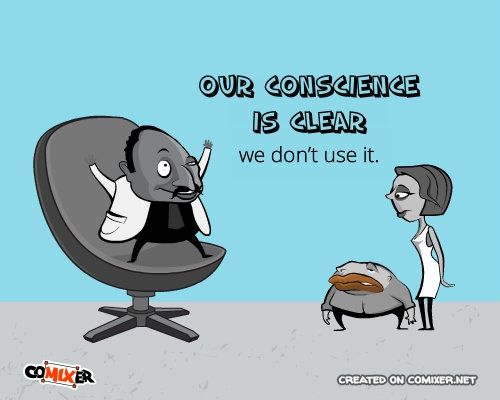 Fortunately, for McCain on a personal level,   he will NOT be subjected to the same HARDSHIPS as those currently on OBAMACARE. His Congressional Health Insurance, VA Pension, and enormous Wealth will  provide him and his family a very soft financial and Health Care coverage, NOT close to the OBAMACARE provisions available to most of the  average struggling American.

McCain, rapidly approaching his end as a living soul, need not fear what his treacherous NO Vote will have on HIS treatment and care in his final days. HE IS A PRIVILEGED ELITIST SWAMP PERSON whose ONLY care is himself and his immediate family and friends.

McCain's past reputation as a (last in his Class student at the US NAVY ACADEMY), his raucus and rowdy behavior as a Naval Officer, ( Backed by two US NAVAL ADMIRALS as a Grandfather and  Father, who interceded for his deficiencies throughout his Navy career, such as it was. !!!) McCain was also responsible for the infamous EXPLOSION that resulted in the death of 137 American Sailors on the Deck of a US  Aircraft Carrier,ready to launch a raid on North Vietnam. McCain escaped the conflagration only to find his way to the Officers Ward Room to watch the event unfold rather than STAY top-side and help the wounded and suppresss the raging fire which almost sunk the ship. McCain was never charged with the cause of the accident, (certainly his Father ,Admiral McCain was the Head of US NAVAL OPERATIONS in VIETNAM, saw to it that his errant son's NAVAL RECORD remained unblemished, and he was never (Formally) charged. McCain was then SHOT DOWN over North Vietnam in his Skyhawk jet ( a very small jet fighter/bomber and was taken prisoner. Due to the small and tight configuration of the Cockpit area, McCain upon ejection broke his arms and shouder upon "Punching -Out" and subsequently was captured by North Vietnamese Civilians and Army personel. Photos of McCain in captivity were broadly published by the Vietnamese Communists showing how "HUMANE" they were in the treatment of wounds received by the AMERICAN AIR PIRATES. The official reportage of US Navy  Publicity in regards to McCain's condition was that his "WOUNDS" were the result of incessant TORTURE by his captors and led the American public to believe that McCain was a HERO in Captiity and not the "SONG-BIRD" that his fellow American POWS claimed he was.

McCain has been a PHONEY all along and proved it when he and  ( Former Senator, and Secretary of State, JOHN KERRY (another former US NAVY Turncoat) after the War in Vietnam, worked feverishly together in the US SENATE to pass Legislation to NORMALIZE TRADE RELATIONS  with the COMMUNIST PEOPLES of  VIETNAM. After LYING to the AMERICAN PUBLIC, that ALL AMERICAN POWS and MIAs had been RELEASED or accounted for, ( which was a stumbling bloc to US/ Communist VIETNAM Relations and  a very important issue to those of us who KNEW that there were over 1500 POWs that were STLL HELD by the Communists !!!!  McCain and Kerry convinced the public and Congress that ALL POWs were accounted for and the Legislation was passed. The "IMPEDIMENT" to normalization was removed....... as were the lives of over 1500 AMERICAN SERVICEMEN whose lives were SACRIFICED for none other reason than POLITICAL EXPEDIENCY !!!!!!!

As far as I am concerned, both McCain and Kerry along with ALL those who knowingly let those American Servicemen be sacrificed, deserve to spend ALL ETERNITY in the BOWELS of HELL !!!!!

Feel free to add Hanoi Jane to the list... sob sob. All they have to do is pass one of the clean repeals they promised us that they wrote during 0bama's reign of terror, treason and humiliation, and they would have Rand Paul and most likely Murkowski along with all of the Conservative Caucus, and all would be good, especially for WE the People who do NOT want to live under socialism and a collapsing economy. They would also have WINS for the midterm elections. But, frankly, my dears, they don't give a damn. shades of Gone with the Wind, now banned in this country.

WTH would anyone in their right mind who is NOT a communist or socialist, WANT to give this government, the right to do to all of us what they did to the Veterans? They DIE waiting for care. Just like in Europe.

The same government, that through our other socialist programs of Medicare and Medicaid, waste in fraud around $200 Billion every year of our sweat and blood/money that they plundered from us.

Every congress person who would vote for socialist health care  in this country should just be drug out by the hair on their head or by their neck and just shot in the street by WE THE PEOPLE.

Well...there you have it, that's the key question "WTH would anyone in their right mind"