January 19,2018, A 24-year-old Portland police officer has been charged with five misdemeanors, including assault and battery, after being arrested Saturday night at a concert venue in Worcester, Massachusetts. 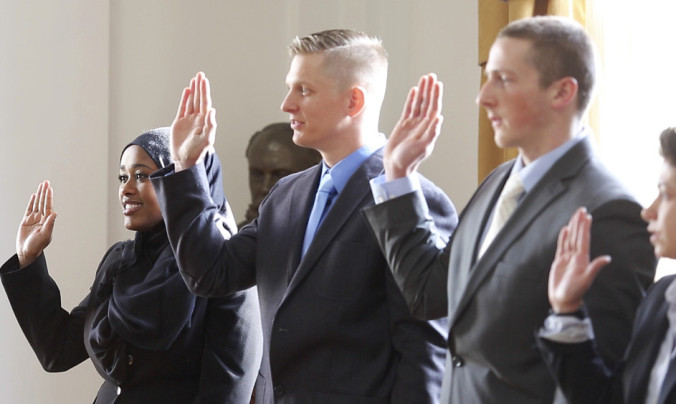 What a difference a year makes!

This time last year, open-border Leftists were celebrating the swearing in of the first Somali refugee police officer.

Fast forward one year and that same “history-making” Somali police officer isn’t arresting criminals — but instead, being arrested.

A 24-year-old Portland police officer has been charged with five misdemeanors, including assault and battery, after being arrested Saturday night at a concert venue in Worcester, Massachusetts.

A Deering High School student in 2011, Zahra Munye Abu went on to study criminal justice and women-and-gender issues and is now a police officer in Portland. Her arraignment in the concert disturbance is scheduled Wednesday.

“The nightclub was hosting several live musical acts,” Hazelhurst said in an email. “She was (given) several opportunities to leave and refused. Eventually she was placed under arrest.”

Worcester police would not provide more details about the incident, and members of Abu’s family declined to comment when contacted by phone at their home.

Portland Police Chief Michael Sauschuck said Abu has been placed on administrative leave with pay pending a review of the matter.

“The Portland Police Department was notified late Saturday night of the arrest of Police Officer Zahra Abu in Worcester, Massachusetts,” Sauschuck said in an email. “This issue will be dealt with as a personnel matter from this point forward, so I will have no further comment.”

Chris Besaw, the Palladium general manager, declined to comment about the arrest or what occurred before local police became involved.

Abu was bailed out of jail at 1 a.m. Sunday, Hazelhurst said. He did not know the bail amount. She is scheduled to be arraigned Wednesday in Worcester District Court.

Abu is a high-profile member of the Portland police force because she is the first member of Maine’s Somali immigrant community to become a police officer in Maine.

She was born to Somali parents in a Kenyan refugee camp and has lived in Portland since she was 2 years old. She graduated from Deering High School in Portland and studied criminal justice and women-and-gender issues at the University of Southern Maine.

If convicted, Abu faces a maximum penalty of up to 2½ years in a county jail on the assault and battery and the resisting arrest charges. Each of the other charges include less severe maximum penalties.

Another fine example of how multiculturalism does not work. Will we learn from watching Europe erode into a absolute s**t hole?

Things are a bit messed up, I am not to get into a long chat about this,