"Lurch" Kerry: ‘Lack of Integration’ Of Muslims In Europe Like U.S. Civil Rights Struggle In ’60s 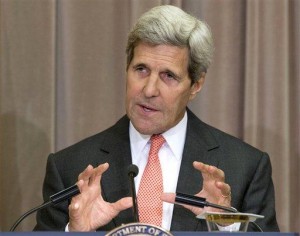 (The Weekly Standard) - Secretary of State John Kerry met with EU High Representative Federica Mogherini at the State Department Wednesday and afterwards addressed the press and took some questions. One question from a French reporter concerned problems with Muslim integration in Europe and the potential terrorism ramifications:

Question: [W]e heard recently from President Obama talking about the potential lack of integration of Muslim communities in Europe. He mentioned that as one of the greatest dangers that Europe faces in terms of terror threats that might come. Would you agree with those words from President Obama, and should he have used those? And Mr. Secretary, I’d like to get your opinion on that as well if I can.

Kerry responded by recalling his days as a college student in the 1960s during the civil rights era and the consequent sensitivity of his generation to “this question of minority and rights and integration and so forth.” After explaining that although the U.S. has made “unbelievable progress” on race-related matters, “we still have some distance to travel.” Eventually, Kerry stressed that “this particular incident of violence [terror attack in Paris] wasn’t a specific targeting that grew out of that [lack of integration]“; however, he said, there is work to do where “one minority or another or another is not able to share fully in the full integration” in the country where they live.

Here is Secretary Kerry’s full response to the question:

SECRETARY KERRY: Well, let me just begin quickly on the integration issue. When I was – I entered college in 1962. And in 1963, ’4, ’5, we were deeply embroiled in this country, and we – college students in the Civil Rights Movement. And we were deeply impacted by that and have always been, I think, as a generation, much more sensitive to this question of minority and rights and integration and so forth. We’ve made unbelievable progress in our nation, unbelievable progress in the years since then. But it would be completely disingenuous not to say to you that we still have some distance to travel. We’re not finished. We’re still – you heard the President last night talk about voting rights. So what was won in 1965 still has to be fully embraced and implemented here, and other things that are linked to that. We’ve seen our own struggles in some communities and great debates about race in America in the last year.

So it would be dishonest of me – and I’m not involved in domestic politics right now, so I’m not going to go into it in depth, except to say that therefore, I think I can say with honesty that there is a challenge in many other parts of the world. And Federica is absolutely correct; this particular incident of violence wasn’t a specific targeting that grew out of that, but we all can do work in many parts of the world that I have seen where one minority or another or another is not able to share fully in the full integration in whatever country they happen to be living. So the world has a road to travel on that, and that’s why we continue to put such a high premium here on the issue of human rights and democracy, and to continue to push, because I think we’ve learned through our own experience the difference that it can make to the strengthening of the quality of our democracy, to our society, and people benefit when we live by that high moral standard.

High Representative Mogherini, whose response to the question came before Kerry’s, said the following:

On the integration of minorities in Europe, this is a debate, I think, that within member states in Europe, in – I would say in the global community is – has been going on for decades and probably is going on for decades. I would say that there are different models, different histories, and different traditions. What we have to get right in this moment is the fact that we need to work together. You know that very well. Victims of the attack in Paris were not only called Louis or Charb or Anne; there was an Ahmed that was killed by other people that were having names of the same roots, which means that this is a common fight. I would not go on the line of saying that this is minorities against majorities, also because we have different minorities, in Europe as in the United States. We are living in complex societies, and this is our richness. Our strength is the fact that we are different, but we are united and we live together.

And I think that this is the core point. We would be wrong if we were to look at that as an issue of minorities-majorities. This has nothing to do with that. These are violent acts that were targeting people, persons, regardless of their names, ethnic background, minorities, majorities, whatever. And there is no link, I would stress, between minorities, majorities, and violence. A terrorist act is a terrorist act, and we should not go into that kind of discussion about how we manage, or at least manage the majorities or minorities. There is no kind of roots in that.

Permalink Reply by Healani on January 27, 2015 at 6:23pm
Its ashame morons like this hold the highest office in the U.S. what a scary thought.