Landrieu Out, Bill Cassidy IN Democratic Sen. Mary Landrieu , burdened by ties to an unpopular president, lost her bid for a fourth term on Saturday to Republican Bill Cassidy.

With less than 1% of precincts reporting, the Associated Press projected that Mr. Cassidy, a physician and three-term House member, would win the state’s runoff election. Mr. Cassidy had 65% of the vote to 35% for Ms. Landrieu.

The outcome means that Republicans emerge from this year’s midterm elections with nine additional Senate seats and will hold a 54-46 majority when lawmakers are sworn in next year. Among its victories, the GOP swept five Democratic senators from office.

Now it's time to HOLD Obama's FEET TO THE FIRE!!!

NO MORE RACIST VIOLENCE in America ---- NO MORE ATTACKS against American taxpayers when Al Sharpton mysteriously stays out of prison while owing the IRS MILLIONS!!

NO MORE Amnesty for ILLEGALS.  SECURE THE BORDERS, reform immigration and DEPORT or IMPRISON THE CRIMINAL ILLEGALS.

NO MORE alienating Israel and its leader Netanyahu.

NO MORE alienating other world powers and leaders --- time to work together to stop TERRORISM from spreading.  Time to STOP DISSING world leaders like the "JV" incompetent arrogant President Obama does.

BRING ON THE LAW SUITS against Obama and his corrupt cabinet and administration for their MANY crimes against America --- INCLUDING ILLEGAL OBAMACARE.

TIME TO STOP Obama's new AG, before she gets started legally supporting Obama's REIGN OF TERROR.

TIME TO REBUILD OUR MILITARY --- and re-hire the qualified professional military officers that Obama FIRED --- who would like to return to service.

TIME TO REMOVE Obama's overreaching claws of control over citizen's and state's rights and sovereignty that protects us from DICTATORSHIP!!!

TIME TO ADD SPECIFIC wording in the US CONSTITUTION regarding TRAITORS, and the punishment/removal of them FROM OUR GOVERNMENT.

TIME TO REMOVE Obama from the Presidency if he does not lead BOTH political parties, work with the new legislation from Congress, and if the head TRAITOR continues to bring division and destruction to America.

TIME TO DEAL HARSHLY WITH CRIME perpetrated from within the White House and throughout America's streets.

So comrade Landrieu is out; that's one less criminal in the Senate and one more idiot in.

Best news I've heard all day; to me, this signifies America IS, finally, waking up! 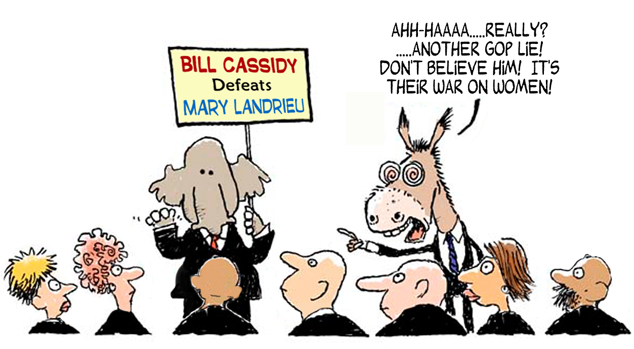 We got the democrats out; now take aim at the rinos.

These are the results of close monitoring of election fraud. If we had allowed democrats to continue rigging votes with illegals, double dipping, and dead people votes Cassidy would have lost.

Sad. They could change our country back to what it should be ! But they won't ! With crybaby Boner in charge ? He will cry like he did when he was elected to lead. Jareer Abeed looks at him hard ? He will fold and cry ! I don't think that any of them have the balls to stand up for America or Americans !

The next big test is to put who we want in the white house in 2016 and not who the big money people want.  We don't need a Jeb Bush or Mitt Romney as President.  They are not for the people.  They are for themselves.

We damn sure do not want an appeaser which it seems both Romney and Jeb are best known for.

And we do not want one NOT natural born either.

him how HAPPY I was that she lost!