Speaking at the New Hampshire Freedom Summit, a gathering of conservative activists and figures organized by Americans for Prosperity and Citizens United, billionaire Donald Trump said Bush’s recent comments on immigrants coming to the U.S. as an “act of love” were “out there.”

POLL: Should people who are on welfare be drug tested?

“You know, I heard Jeb Bush the other day,” he said, with quiet boos and angry murmurs erupting from the crowd at the mention of Bush’s name.

“And he was talking about people that come into this country illegally, they do it for love,” he continued, with the boos growing louder.

Trump added, to laughter from the crowd: “And I said, say it again I didn’t get — that’s one I’ve never heard before…I understand what he’s saying, but, you know, it’s out there.”

Rinos like Jeb Bush constantly bringing up a losing issue, Amnesty, will end up costing the GOP the Senate.  He will drop like a stone in the polls like all the other Illegal Alien lovers, at the expense of the suffering of AMERICAN Families! ! !  Has he no brain or common sense?  AMERICANS DON'T want "another" Amnesty.......... 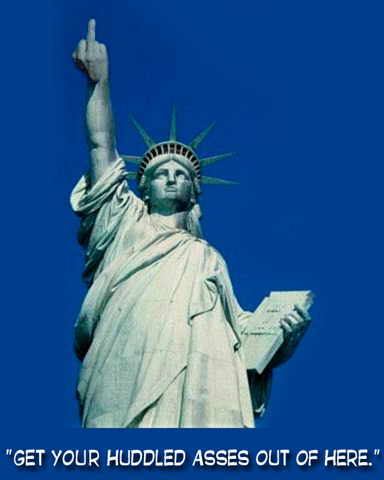 He's not even RINO. He is a progressive lib!

Permalink Reply by Silverback on April 13, 2014 at 5:12am
However, like obozo, they bring it up time after time and it isn't long before all the mind numbed progressives/liberals are chanting with them.

The Bush family did not push American into the dirt. They didn't start it neither.

Clinton caused the recession we found ourselves in and Obama pretended to be doing something about it while making things much worse and then blamed Bush.

War usually brings a strong economy with it. And it did in this case as well for a good while. But it could not overshadow the Clinton sub prime mortgage fiasco that BUSH warned about 11 times and Congress did nothing about!!

Two things Bush did that were Unconstitutional. The Patriot Act and the DHS.

I challenge anyone to name another act from Bush that was Unconstitutional.

So if you mean Bush gave Obama his power then you are right. Bush did give Obama the ability to use all government agencies against the Tea Party and conservatives because now all agencies are under one head which is BAD!
But Bush's intentions about the Patriot Act and the DHS were not negative. The problem with what he did was that no one considered what a despot would do with such powers.

bushes..esp daddy bush are part of the trilateral commission...and their goal is a one world government.....they are wolves in sheeps clothing...and yes clintons, rockerfellers, rothchilds, soros,kissenger, both rices'...susan and condi are members....Americans have been hoodwinked for a long time , since dewey and wilson...all names not capitalized on purpose...I do not respect them....we are like the boiling frog story....incrementally these evil folks have been working on our freedoms for a long time....and we are just now waking up to it because king o is so blatant about it....

I am so glad that true Americans are coming out in defense of our country.

NOW THERE IS ONE FAT SELF SERVING DEEP POCKETED POLITICIAN WHO IS TRYING TO SMHOOZE THE OVER FLORIDA'S HALF OF THE ILLEGAL ALIEN POPULATION. BUT LIKE OBAMA, HE DESPERATELY NEEDS A GOOD SCRIPT WRITER AND A VERY VISIBLE TELEPROMPTER!  ALSO, SNIFFING THAT STUFF BEFORE BEFORE HIS TURN AT SPEECH MAKING DOESN'T HELP AT ALL!

This is one man I do not want to see Nominated.     Amnesty,Pure & Simple.    No we do not want to turn our Nation over to Mexico, we do not want to slide from a Nation of Winners, to accept millions who will Vote Dem, but, know nothing of our Heritage, have broken the Law, and  are the Total  Low Info Crowd.   They voted for Obama!!!      We must not let the Establishment, push another Loser into the Ring, no Karl Rove, are you listening???  We have seen enough of your Candidates, your  Poll Numberss, you general BS, and we know how much money you make, while you will leave this Nation in the Trash Bin.  By then, you and your cohorts will have amassed such fortunes, you will be Immune to the Garbage Heap you have left behind.

How many people know that when former Pres Ronald Reagan was avoiding an assassination attempt...that Jeb Bush and his wife were having dinner with the brother and wife of the young man accused of attacking Reagan?

Not coincidentally...Reagan was on record being against GHW Bush -- who ran the CIA when Obama was supposedly working for the CIA -- from being anywhere near the White House as a VP.

How many people have heard of Marvin Bush -- Jeb Bush's brother? He was on the board of directors of a company called Securacom during George Bush's first term back in 2000....which was contracted to provide security for the World Trade Centers.

Think they knew something the majority of American's didn't? Hope the world is thru with the Bush's.

Jeb Bush is a RINO who would do exactly what the FAKERnCHIEF is doing now open the borders and allow the trash from other countries to flood in and destroy our great country.Right now there are several million people out of work in America who would do those jobs (The illegals are doing) Americans wont do(So they say)Soon we wont be able to recognize America as we once did.The curse of multiculturalism brings customs flags langauges of other countries to this English speaking nation.Soon America will be a banana nation who will have lost its place as the world power she once was and reduced to a 3rd world nation.I pity and cry for America.

as soon as jeb said that crossing illegally across the border was an act of love...I knew he was finished. since the 80's...illegal aliens have ruined states economies, raised states taxes, and have screwed the performances of schools all over the country...this crap about illegals can only do certain jobs that nobody else will...has turned into lies and false statements. the real act of love would be for this country to shut down our borders...to protect the citizens that are here now, to protect the safety and security of the country....and the economic structure and integrity of the nation. look outside any social security office...illegals are lining up with false i.d.'s, for social security numbers...where is the end, and now with close to 20 trillion in debt....who pays for all of this, when half the country, including illegals are out of work?