Is the Texas Militia Headed to the Border? 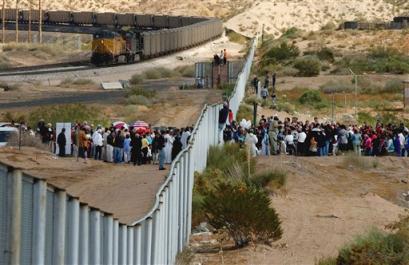 I will be busy this morning because I will be in a meeting with our Local Judge and Sheriff about the Border issue here in Texas.. I ask all Texas Militia personnel to standby.. Lets do this as the Professionals we are.. I will update ASAP..

Mr. Light, a credible militia source, is now posting that Governor Perry has indicated interest in using the militias in tangent with the law enforcement border surge that he announced yesterday.

Update.. RE: Border Op's for the Texas Militias.
I was just informed that the Governor is interested in using the citizens Militias of Texas in this issue. We need a SOP written up and given to the Governors office for a eyes and ears OP along with Detainee OP's that is coordinated with the Local and State Law enforcement. So I call on our Texas Commanders to step up and help with the write up.. Time for a phone convention ASAP.. Please get the word out.. I am asking for the Stand down order to be respected until the SOP is approved by the Governor of Texas. I call on The Texas State Militia, and other Texas Militias to assist in the effort.

If this operation moves forward, militias in other states are offering their support deeming this a national issue as opposed to just a Texas problem as indicated by Chad Neal-Ok D.F.,

I can't speak for all of the Oklahoma Defense Force Militia command but Rick Light as the 1stSgt in the OKDF myself stand with you and seeing how this is a national issue we all need to stand together. If you need additional help I'll be more than happy to talk to the rest of the group.

AZ Ranger notes that since national security is at stake there may need to be militia support in Nogales Arizona. Further, he cautions that proper protocol needs to be followed:

historically the militia has had authority only to operate within its specified AO, and commanders have always respected that. The only time those things change, is when a militia is responding to a specific request. So, if TX wants other militia organizations to participate. The TX Militia's leadership should be the people to issue the call, and set the policies of integration and hierarchy once an outside unit arrives on site. Also, that policy can be a lot different for individuals who are not operating as a specific unit. This is an easy fix, and I agree that if TX allows, militias from across the country should show up and contribute to the defense of our borders. I think that Nogales, AZ POE is going to be the next mess to deal with.

Aaron Christopher Combs doesn't believe that this is an operation that the Governor is currently contemplating.

While i am not calling anyone a liar, but i just got off the phone with austin at the GOV office, Dewhurst and abbott all three have said that NO one has contacted them and they have not contacted any militias about using them. They told me personally that if anything like this were to happen they would not use the militias to write the OP and that it would be a public announcement at a press conf.... this is what i am being told. PERSONALLY by these peoples offices.

Audie Twiford points out that the militias are not vigilantes and that they do need to be called out by the Governor.

It is not the duty of a militia to become a force of vigilantes, it is the duty to prepare and make ready to become organized at the call of our Governor and support him at a state level to be directed by him and the State of Texas in the time of need. Texas didnt get where its at today by being careless and unorganized, the militia has protocols to follow like any other organization.

Will Governor Perry make use of this additional manpower to stop the invasion of Texas by illegals? Time will tell.

*note: all block quotes are directly from FB posts*

Yes the Texas Militia should jump into gear and help the Border Patrol with the control of US Borders.. Since the Muslim President isn't going to do nothing We The People must take action and it must be now.. I myself am tired of these freeloaders coming across are borders and think the US owes them something.. We have way to many people that need help in the US and are US born and bred and don't forget our Veterans that served our great country.. If your here illegally send their asses back to Mexico and the sooner the better. Its time to wake up America and show DC were tired of this BS.. Close the damn borders and God Bless America..

THEY NOT ONLY NEED THE MILITIAS BUT ALSO THE NATIONAL GUARDS, THE BORDER PATROLS AND A MASSIVE NUMBER OF ARMED AMERICAN PATRIOTS AND POSSIE COMMITATIS' TO GUARD THE BORDERS AND TURN THE ILLEGAL ALIENS BACK!    IT'S A DAMNED CINCH THAT THE KENYAN BORN ILLEGAL ALIEN MUSLIM/COMMUNIST OBAMA AND ALL OF HIS COMMUNIST "BLACK POWER" MINIONS IN THE DHS ( OBAMA'S PRIVATE MUSLIM/COMMUNIST ARMY ) ARE NOT GOING TO STOP THE FLOOD OF ALIENS!  IN FACT THEY ARE INCOURAGING THEM TO FLOOD THE NATION, THEREBY DESTROYING THE NATION'S ECONOMY!     WAKE THE HELL UP AMERICA!!

We know that Governor Perry has just issued the available funds which is several millions per day to help with the border. The Militia is a last resort but possible. We know treasonous Obama and his other Marxist/Muslim heads will do all against America and her citizens while the Marxist left media will support it by lies; miss-directions; and plain treasonous by their own words!

PHX here, Called Brewer and she is not going to she has sold us out We are in deep doo here for the rinos are full steam on amnesty people we trusted have turned like County Attorney Montgomery and severeal reps We have to get Andrew Thomas elected governor but mccains crew are supplying Ducey the party has not even given Thomas his election money  God the corruption here is so bad

Susan, I agree, we need Andrew Thomas for Gov. here  in Az. The liberal county board and judges have been relentless on our conservative county atty and reps and we need to put a stop to that.

This could be one reason why: Anybody hear about this yet?

An ongoing situation that has been made exponentially worse by Obama's Open Border policy.  Obama is ending US sovereignty over its...OUR...country while Congress and others do nothing to stop this mad man with but, one mission--to destroy the USA and its people!

Our border patrol should shoot first and ask questions later!

Comutertech----NOW you have the idea!

Mary Smithey (and anyone else that wants to know): Lorie Meachem posted a "STAND DOWN" directive that told everyone to wait until contacted by their militia director! Seems the original "call-to-arms" was put out by a couple of woman that started a "panic rumor" because they wanted to see something done! They even used a guy's name associated with the militia, and posted locations & phone numbers! It all  looked so real, but was a false alarm! We do NOT need stuff like this! I copied all the numbers down!