Is Donald Trump A Conservative Or Not?

Is billionaire and Republican front runner Donald J. Trump a conservative, or not?

Fox News’ Jesse Watters has made the best possible case that he is.

“Come on, let’s talk about his conservative principles on the three core issues Donald Trump is about; immigration, national security and jobs. He is the most conservative guy out there and he is setting the agenda,” Watters said on Friday, responding to National Review‘s anti-Trump manifesto. He could have added a few others, like guns.

But that’s not quite convincing enough for many conservatives. Trump’s vehemence about his views should not, and does not, obscure the fact that they are, for the most part, very new.

This is a man, after all, who criticized 2012 Republican presidential nominee Mitt Romney for using the term “self-deportation” because it was “mean-spirited.” That was, for those keeping track, one election ago.

True, Trump has been willing to sacrifice his own brand for the sake of his newly conservative posture–a sign that he is serious.

But let us stipulate, for argument’s sake, that Trump has a “mixed record on conservatism,” as my colleague Ben Shapiro put it rather diplomatically.

There are many conservatives who still support him wholeheartedly, and there is a real conservative case for Trump. And I say this as an observer who has been skeptical of Trump from the start.

The Buckley rule. William F. Buckley, Jr., whom Trump cites to defend “New York values,” urged conservatives to support the most conservative candidate who can win. And Trump may be the only one, in an election that will decide the Supreme Court’s future.

Whatever the head-to-head polls say on any given day, unless she is indicted, Hillary Clinton is likely to win this year. She has the Electoral College in her favor, and the media on her side.

Only Trump has shown the daring necessary to challenge Clinton’s built-in advantages.

Sen. Marco Rubio (R-FL), who in theory is the most “electable” Republican in the field, for example, declined to target Clinton over her role in her husband’s scandals. Trump, in contrast, released an ad featuring not only Monica Lewinsky, but also Anthony Weiner. He claims credit for Hillary’s slump in the polls against Sen. Bernie Sanders (I-VT), and he is partly right.

Other candidates–Wisconsin Gov. Scott Walker, for one–looked amazing on paper but failed to connect with voters in practice. Cruz, Trump’s closest rival, may yet win Iowa, and has the ability to contest every primary, but has renewed doubts about his ability to win a general election after his “New York values” attack.

Trump, meanwhile, has re-discovered the “Reagan Democrats,” the Holy Grail of Republican politics. He may be the only hope.

The consequentialist case. Trump’s value to conservatism is not what he believes, but what his election would do, regardless of his own policies.

For one thing, as I have argued before, the fact that there is such strong conservative opposition to Trump, as well as a fervent desire among establishment Republicans to be seen opposing him (even if they do say they prefer him to Cruz), means that if he won, Congress might finally stand up to the executive branch.

That is why the possible excesses of a Trump presidency are less fearsome than many think. Much of what he says he wants to do may be unwise (e.g. 45% tariffs on China), or unconstitutional (e.g. broad surveillance of mosques). But Trump will enjoy less deference from a Republican Congress than Obama has, and will have no help at all from the mainstream media. That should please constitutional conservatives who want to restore the balance of powers.

Moreover, just by winning the nomination, Trump will have advanced the conservative cause. While he may have held left-wing views in the past, Trump has largely been running to the right, at least in the primary, affirming the power of the conservative base and conservative principles in an election cycle where the original favorite began by promising to ignore them. A movement that rewards converts even more than stalwarts is well-disposed to expand.

Even if he does not win, a Trump loss would be less damaging to the conservative cause than a loss by any other. If an”establishment” candidate wins the primary, but loses to Clinton, the GOP’s conservative base will give up hope. If a conservative, like Cruz, loses in the general, the establishment will start the purge it has been itching to launch.

But a Trump loss would likely be seen as a once-off, from which both conservatives and the GOP might rebuild.

The importance of victory. But enough about losing. A Trump win would have a galvanizing effect on American politics and the American public, much as Andrew Jackson’s win did in 1828, restoring a sense that voters, and not Washington elites, rule.

Many conservatives–even at the National Review–support him precisely because he is determined to shake up a system in which the status quo is not guided by conservative values but cronyism.

Conservatism is pessimistic about human nature, but optimistic about life. The radical left depends on hopelessness, while conservatism thrives on happiness. Barack Obama’s victory in 2008 was, in a sense, the last achievement of his failed presidency, which still depends on casting America as a nation in crisis.

A Trump win would not, by itself, “make America great again.” but it would urge Americans to believe that we still have the answers within.

Reagan Democrats, were not liberal elites & did not support crony capitalism,Reagan did not support eminent domain abuse. Trump lived his life by liberalism this is not conservatism

So,  Darrell Johnson, go vote for someone else.  It's obvious YOU don't want to make America great again.

Just check his  past and you will find he is as liberal as Hillary Clinton.  Cruz made the statement about New York values and if one checked you would know what the New York value is.  Best example would be they elected a Socialist as a Mayor, what is Donald Trump, a conservative, not.

How do you know Trump voted for the Socialist mayor?  Oh, that's right...YOU DON'T!

I would not have cared which ticket Trump ran under I would vote for him. Some of us vote for the Person, NOT for the party. In a perfect world, we would END the party system.

Permalink Reply by kathi mcdermott on January 25, 2016 at 9:42pm
No Donald trump is NOT A CONSERVATIVE

I do believe Mr. Trump to be conservative or at least close enough.  I just wish Mr. Trump would learn to keep his personal feelings toward others to him self .  I believe for Mr. Trump to be elected he should also keep specifics about how he would do things to himself and act upon them after being elected President.  I like the way he calls and tells it like it is.  He Must Nominate one of the other candidates as his Vice President and running mate.  However, both Must Agree, whole heart-idly, to work head to head in making sure the correct decisions are made in order to turn America Back To Where She Needs To Be!!!  They Must Develop A Strategy To Bring Democrats And Republicans Together With A Commitment To Save America !!!  The Republican Party Is NO LONGER THE GRAND OLE PARTY (GOP)!!  It is Seriously Fractured, Divided and a Growing Part Of The Problems In Washington, DC And America!!  The RINOS Must be Brought Back Into The Conservative Mindset, As Well As, The Leftist Leaning And Socialistic Members Of congress By Using A Basic Common Sense And Factual Rational !!  These Individuals Must Be Informed By Their Peers And The Voting Public Why This Must Happen For Them To Hopefully Then Realize The Error Of Their Ways !!  We Have A Traitor, I believe To Be Of muslim/islamist Persuasion In Our Oval Office!!  He Is Being Allowed By congress To Have it All His Way Every Time He Writs One Of His FATWAS !!!  Why This Is Being Allowed By congress Is Even More Frightening !!!  He And This Dictatorial Mentality Must Be Stopped !!!  Not Only For The Present, But The Future Presidents As Well!!

Permalink Reply by Tracie Kennedy on January 26, 2016 at 2:07pm
I like DonnaTrump I like his views and love the way he speaks his mind it's about time someone speaks up for the people

It is amazing how people will not care at all who people were just months ago. Here of all places,the tea party website,that people are getting behind someone like trump. As far as I can see,we are screwed with who we have now and the anger blurring peoples vision looking forward towards trump,WHEW !!!!!,we are done.

So lets discuss whoever it is that YOU support.

If you are not willing to do that, it says a lot about you.

Hmmm, I get the idea that YOU were never wrong in your life.

Please explain that remark about Trump. 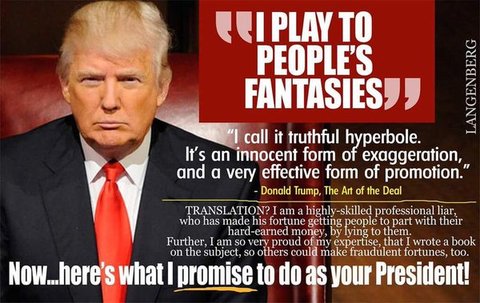