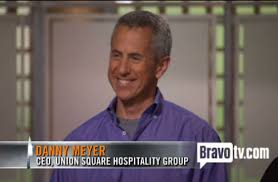 The 9/11 museum’s appetite for crass commercialism will be satisfied with an 80-seat restaurant inside the memorial’s allegedly solemn grounds.

The Pavilion Cafe, run by Danny Meyer’s Union Square Events, is scheduled to open this summer inside the National September 11 Memorial & Museum — a move overlooked when museum officials took media and VIPs through the grounds last week.

The menu is expected to offer “an array of local, seasonal fare in a relaxing and comfortable environment,” according a notice in the official museum guide.

“We’re not doing this for crass or commercial reasons,” said Meyer, adding that a portion of proceeds are going back to the museum.

A rep for Union Square Events added: “We’re just trying to create a thoughtful experience and bring our hospitality [to the museum and visitors].”

The museum’s struggle with good taste was on display Tuesday night, as VIPs partied on the sacred grounds while first responders and family members of victims were turned away at the door, sources told The Post.

Before the 9/11 museum was opened to the general public on Wednesday morning, first responders and family had been been allowed inside for advance looks since last Thursday night.

But those honored visitors were turned away at the door early Tuesday evening, because only VIPs — who included former Mayor Michael Bloomberg — were allowed inside for a black-tie cocktail reception, sources said.

Feal said Tuesday’s closed-door, catered event could have been held at any number of spaces in the neighborhood.

“I understand the need to raise money to operate a museum,” Feal said. “But when you’re disrespecting 9/11 victims, you’ve crossed the line of being humane.”

The museum cut off the first responder and family visits Tuesday night to get ready for the general-public opening on Wednesday, according to a museum spokesman.

But the rep also confirmed that the soiree — with about 50 to 60 guests — went on, even during preparations.

“The days-long preview included 24-hour operations over that period. We had to close the museum to prepare the space for our historic public opening [Wednesday],” said museum spokesman Michael Frazier.

There should be no eating in this Museum as it is a memorial to the people who die.

As usual my comment is that NYr's get what they derserve they VOTE dem.  BUT EAT WHERE PEOPLE DIED!!!  MANY died a horrible death.

All of us know about voting Dem! One has to deny that anything could be immoral! That is step # one! All is just a choice as our Liberal schools teach and we got school shootings! There is NO right or wrong, just choices! So what did Dems do after we get school shootings? They blame an object! If they cannot blame you or another, they look to inanimate objects! If absolute corruption had a name, they earned top billing!

Permalink Reply by Skip peters on May 21, 2014 at 5:03pm
Well we can't expect Michael Bloomberg to be around common people do you after all he's putting up 50million dollars to steal your freedom of the 1st and 2nd Amendment these godless people think he can buy his way into Heaven. Jesus said there is only one way to the Father. Jesus also said many will come but few will be chosen. Michael Bloomberg said he didn't believe in God, but he thinks by stealing a God given right away from you and I that will get him into Heaven, God calls these people FOOLS and God is never wrong.

WHAT difference does it make??? 911 was not done by Osama. It is a tribute to that, and anything in that museum I am sure will display that Muslims did it to us... It is all based on a lie. Until we get it right and display the truth about it, it doesn't matter if there is a gambling casino or a strip club in there... IT IS ALL BASED ON A LIE!!!!!

Isn't it great .. the xmayor of NYC thought lg sodas, salt were bad for the people of NYC,  but has no problem having a private party  on their graves.

Hey, I am a New Yorker and am willing to admit that New Yorkers can be mighty tacky but this tops them all.  How crude and insensitive can a person be to host a party on such sacred ground.  Bloomberg is a Pig of the highest order.

I can see a restaurant as some family members and friends of those lost might need to take a rest and have something to eat, as long as it does not become an exercise in commercialism.  Unfortunately, I am sure it will be very commercial.

It seems that nothing is sacred any more.  We have sunk to sub-human levels in so many areas.

This whole project is a reminder of what Islamic Terrorits did to our Country, it is a reminder of what Jihadists do, many in NY have part of their Families, or Friends buried there.       It is sensitive,at the Shrine of the Alamo, silence is asked for, as you are walking on Hallowed Ground.         This Shrine, above all must remind us of the courage, and the determination of a Country, when attacked, puts all differences aside to come together in Unity.      Great respect should be observed.

My opinion on this is that is extremely of poor taste and the restaurant owner needs mental help or is Muslim and making fun of those that died?

why would this museum have an eatery anyway, or a gift shop for that matter. its a memorial more than a museum, and should not be some fancy cash cow.....who in the hell would want to go thru this place and eat anyway......I can see maybe a coffee shop, but nothing else.

Yeah, Al, sort of like walking out of a Holocaust Museum, and feeling hungry, as opposed to the solemness of the site.     Reverence seems to be old fashioned, but the Mighty Dollar never goes out of style.       Nothing NY does suprises me anymore.       Surely a different breed of Cat there, like in Alley Cat.