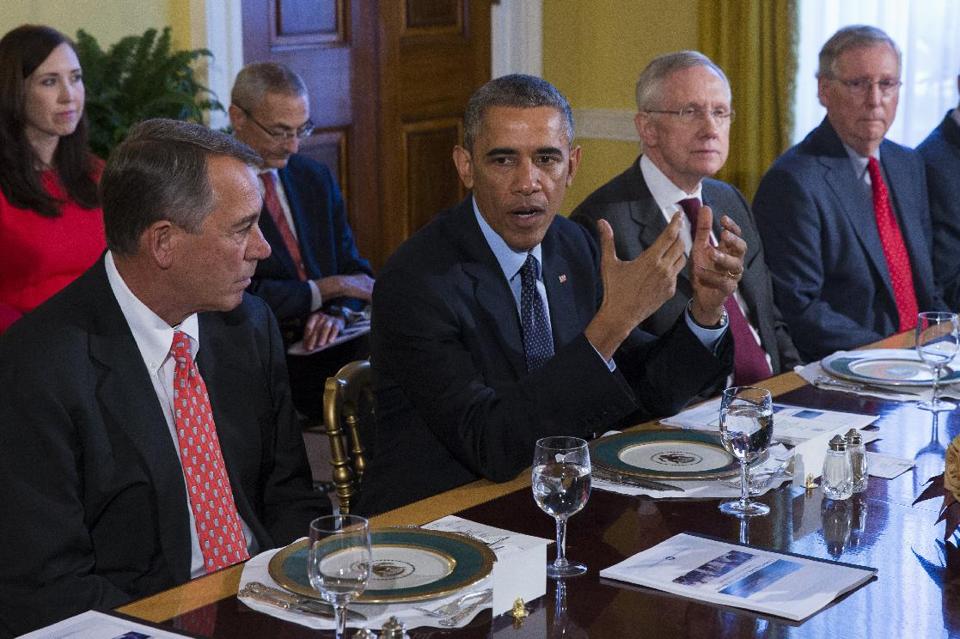 A White House lunch aiming for cooperation boiled into a fresh dispute with newly empowered Republicans over immigration reform Friday, with GOP leaders warning President Barack Obama to his face not to take unilateral action. The president stood unflinchingly by his plan to act.

Republicans attending the postelection lunch at Obama's invitation said they asked him for more time to work on legislation, but the president said his patience was running out. He reiterated his intent to act on his own by the end of the year if they don't approve legislation to ease deportations before then and send it to him to sign.

The Republicans' approach, three days after they resoundingly won control of the Senate in midterm elections, "seemed to fall on deaf ears," Sen. John Cornyn of Texas said in a telephone interview. "The president instead of being contrite or saying in effect to America, 'I hear you,' as a result of the referendum on his policies that drove this last election, he seems unmoved and even defiant."

"I don't know why he would want to sabotage his last two years as president by doing something this provocative," said Cornyn.

The White House said that Obama laid out three areas where he and Congress could work together before the end of the year — emergency funding to combat the Ebola outbreak, approval of a federal budget and quick action on spending to fight the Islamic State militant group. And the White House said, "The president reiterated his commitment to taking action on immigration reform in light of the House's inability to pass a comprehensive bill."

The meeting was tense at times, according to a senior House Republican aide. The aide was not authorized to describe the back-and-forth publicly by name and spoke only on condition of anonymity.

he is the top ILLEGAL DEPORT HIM NOW!!!!

AMEN SUSAN!   That's why nobody gets to see the REAL birth certificate....cause he'd be among the ones getting deported!

Or his school records or previous passports.....my guess is he is still a citizen of Indonesia...

Yes, and why did he have (2) SS# and one belonged to a man born in 1890? How stupid does one have to be to support this criminal traitor?

The reason being he wants as many muslims to come in to America as possible before the boarders are closed. Anyone that cannot see this, has their head in the sand. Middle East Sand!!

Once again.....James.....thank you so much for telling us that we're all  STUPID....and only YOU have a handle on reality.  It's BOTH.  You're as pushy and arrogant as the idiot in the WH.

Marilyn, head in the sand means lacks knowledge by avoiding the facts. I do think many Muslim will take advantage and have been called to do so. We may also think that these are not friendly Muslims!

Why is Obama to Stupid to realize that the Congress can block any action that Obama takes.  They have that authority, especially since they control the house!

The list is Long, of Obummer's Acts Against America, Congress has their work cut out.

Unfortunately, Our Control in Congress doesn't start until next year, and I fear there will be much more damage coming 'til then.  Let's Hope and Pray Congress finds it's spine and gets Tough!