U.S. Border Patrol agents have arrested an illegal alien after he was spotted having sex with a cow in rural Starr County, Texas. Agents observed the man having sex with the cow near the Hidalgo County Line, the Starr County Sheriff’s Office confirmed.

Breitbart.com reports: The story was first reported by the local newspaper El Tejano, noting that when deputies arrived at the scene, Border Patrol agents provided additional information and the location where the suspect was reportedly seen with the cow.

At the scene, deputies interviewed 28-year-old Jose Nino, a Mexican national who was in the country illegally. Sheriff’s deputies arrested Nino and took him to the Starr County jail. Nino went before Starr County Justice of the Peace Ramiro Guillen, who formally charged him with one count of bestiality, a state jail felony, and set his bond at $1,500 personal recognizance. Deputies then turned Nino over to U.S. Border Patrol.

He was just trying to make more Democrats! ...whats the big deal!

OBTW - If he is a liberal Illegal Alien it could have been a bull!...just saying.

They are trying to prove rape, but the cow found the jail and was protesting to let my man out. Obama was upset over the news...:)- Guess what I found out, all by myself: 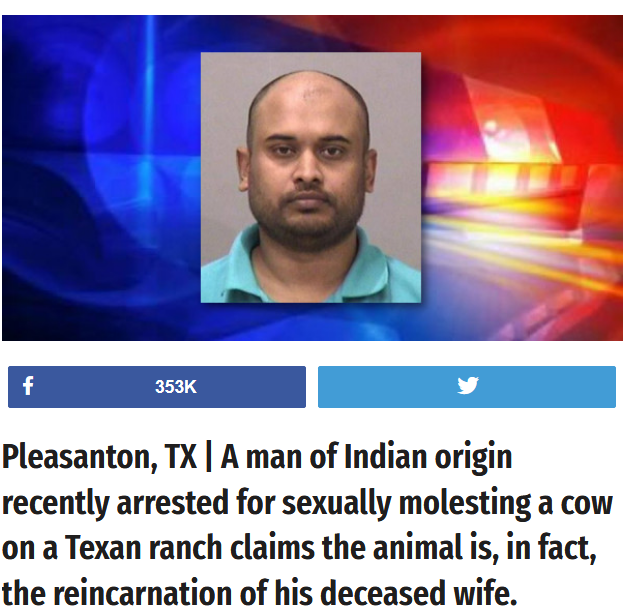 Rajiv Chowdhury, 34, was intercepted this week by Atascosa County police after ranch owner Ted Bukowski called police after he found the half-naked man sexually assaulting one of his cows.

Bukowski first believed his cattle were being harassed by coyotes until he discovered it was, in fact, a man that was the source of all the disturbance.

“He asked me not to shoot. He told me he wouldn’t do it again if I didn’t call the police” Bukowski, 67, told reporters.

“He said the cow was the reincarnation of his wife, and when I asked him what the hell he was talking about, he said the cow had the same eyes, smell, and taste than his deceased wife,” he recalled, visibly amused.